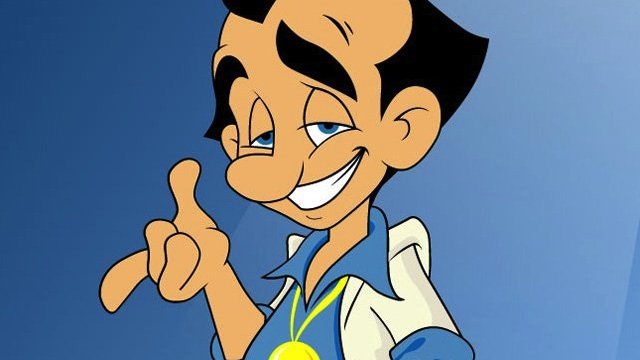 One of my proudest gaming moments was tricking Leisure Suit Larry III into thinking I was a full grown adult. The game opens with a quiz that functions as an age gate – asking questions about an era well before any kids playing the game would know about. I sneakily posed these questions to my parents, entered them into the game, and boom, there I was – playing the full uncensored version despite being 13 or so at the time.

The very next thing you do in Leisure Suit Larry III is peer through a pay-telescope into the window of a woman getting undressed. If you failed the quiz, she’d pull the shades down all the way and you’d only see her outline. If you passed with flying colors, as I did, you saw the full monty. The juxtaposition of being a *fake* voyeur while playing a game I *shouldn’t* was stellar. I was looking at something sexy I shouldn’t be, and with that, I was hooked.

Taking place at a fancy beach resort, Leisure Suit Larry III is an old school point and click adventure game; the kind where you could die. The kind that would stump you for weeks if you didn’t have the internet and a walkthrough. The kind with mazes and obscure objects and obscure solutions to puzzles using those obscure objects. It’s from the golden age of adventure gaming, and is of the quality you’d expect from the time. There are a few notable stand outs including a gym, a maze of lockers, and a desperate attempt to get into a stage show that are gratifying and funny in both success and failure.

But what makes Leisure Suit Larry III great isn’t the gameplay. It’s the characters. Its humanity. It’s from an era in game development where an auteur like Al Lowe could take chances and be silly and indulge the fears and desires and foibles of a middle-aged bachelor on the prowl. He’s everything modern-day gaming protagonists aren’t, and everything modern day people are. Larry wasn’t cool, and because most *people* aren’t cool, we liked him. We related.

There’s a moment in the game where you get with a showgirl girl named Sherri, and they’re bathed in silhouette. They converse, Larry speaks of pulling his back, Patti helps ‘direct’ him, and the whole thing is warm and silly and human and in hindsight – familiar. Gaming and sensuality rarely mix. If I close my eyes and try to think of one truly romantic or arousing moment in gaming history, what comes to mind are juvenile and sophomoric attempts at titillating audiences via CGI skin, and versus arousing them with real human emotions.

Take Heavy Rain, a modern-day adventure game with plenty of sex and nudity, but it’s presented like a virgin’s attempt at 50 Shades of Grey fan fiction. Terrible QTE love-making scenes aside, there’s a lady, Madison, who escapes a brutal sexual assault, and promptly heads to a dance club, hikes up her skirt, and dances provocatively for a crime lord as to get invited to his VIP room, where she strips before getting the information she needs. These moments are so out of touch with reality, they’re frankly an embarrassment to gaming, and more offensive and exploitative than anything Leisure Suit Larry could fathom.

Leisure Suit Larry III may have been a game that objectified women, but did so through a lens Heavy Rain was lacking. Entertainments like Pineapple Express and Harold and Kumar and Breaking Bad have strong anti-drug messages despite fetishizing drug use along the way, and similarly Leisure Suit Larry III does a good job of letting you know what you’re getting into isn’t a good way to be – and ultimately concludes with a wholesome message.

Yes wholesome. Larry is a schlub like the rest of us, openly looking to get lucky but secretly lonely, confusing lust and love. It’s a character study masquerading as a skin flick. It’s relatable and warm. The greatness of this game is in the notion that great characters often begin as scoundrels and find their fundamental decency.

When’s the last time anyone in a video game was relatable in this way? Can you think of a single personality trait or quip or human moment from any of the ‘romance’ options in Mass Effect or Dragon’s Age or The Witcher?

Probably not. Sure you know the characters, what they told you, who they are, but can you describe any ‘romantic’ moment in those games with terms like spunky, silly, funny, quirky, weird, or unique? Probably not.

Yet those *are* the words that describe the love interests, characters, and adventures contained in Leisure Suit Larry III. They also describe what Leisure Suit Larry III is, and why it’s a truly great game – it’s not that it’s overpoweringly excellent at humor or intimacy or character development, it’s that it did these things in a way that didn’t result in Undertaker-level eye rolls, or have the player thinking the developer thinks they’re virginal dorks obsessed with bewbs – even if they were.

To paraphrase “Almost Famous”, modern games, and their romance options are Cinemax smut posing as romance. Leisure Suit Larry III has the courage to be Cinemax smut, and in a way, that makes it romantic.