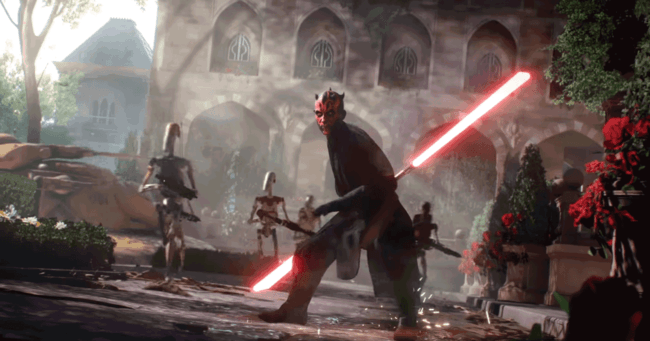 With the recent release of EA’s Star Wars: Battlefront II trailer, the internet has found its new favorite meme about Darth Maul and some scared Clone Troopers. Because of that meme, many are becoming much more open to this new entry in the Battlefront franchise. This demonstrates the internet’s power to dominate the entertainment industry. The last Battlefront was panned for its huge DLC price tag and now, with a simple meme, the internet has completely turned around the potential for success in this franchise.

The internet holds the greatest amount of power in the industry when it comes to how a product does. Whether it be a game, movie, TV show, you name it, the internet controls its level of success. If it loves something, even for a really specific reason like with Battlefront II, that product is here to stay. However, the opposite is also true.

As I mentioned previously, the 2015 Battlefront did very poorly, at least where EA was concerned. The internet similarly banded together on this one but achieved the opposite effect. There were various rallying cries against the previous entry such as the huge price tag, the lack of content, etc. As a result, it didn’t do very well. EA even referenced all its Twitter feedback on the last Battlefront during their E3 presentation of the new game.

Another example includes the Mass Effect series. Once one of the most respected series in gaming history, the internet annihilated it over the past 5 years or so. Starting with the poorly received ending, Mass Effect 3 received unheard of amounts of critical backlash. It was so bad that BioWare even thought it was necessary to edit their own ending, which they were initially very steadfast about, as damage control. Then Mass Effect: Andromeda came out with subpar facial animations and the internet had a field day.

The harsh backlash Andromeda got from the various memes about it led to very poor sales and a hiatus of the series as no one wanted to get a game that had become the laughingstock of the internet. Another example of this is the recent Berserk anime. Fans of the manga were incredibly excited until they saw the poor CGI used in the show. From there, a similar but less noteworthy series of events occurred. By that I mean, at the very least I still hear people talk about Mass Effect but I haven’t heard one word about Berserk since the new anime started and it’s still ongoing.

As mentioned with Battlefront II, the internet has the power to save a franchise as well. The DC Extended Universe of films was saved by internet backlash against Rotten Tomatoes. The first three films got poor reviews while Marvel movies were getting great reviews, leading to a very vocal outcry against film critics. Now, Wonder Woman has reviews that are (in my opinion) higher than they should be. Despite it’s obvious quality as a film, it came across as more damage control to satiate the internet and managed to breathe new life and potential into the DCEU.

The internet is a very powerful beast that has largely taken over the entertainment industry in the modern day. It’s honestly scary how much of an influence it has over how well certain products do, let alone ending up with an opinion it disagrees with.

Atari might be making a console… Huh?
Star Wars: How One Line About Family Changed the Series Forever