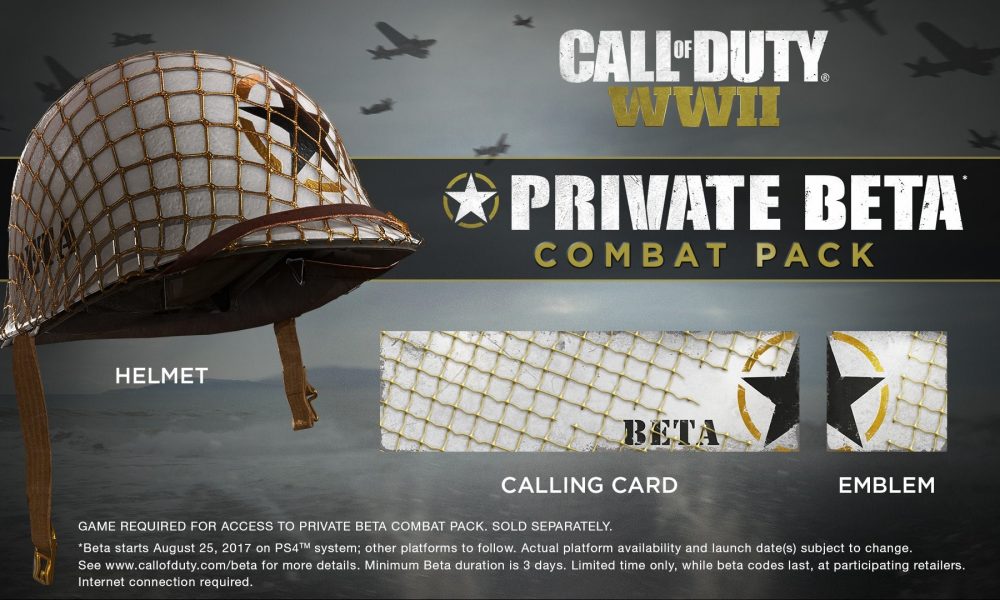 Later this month, the Call of Duty: WWII multiplayer beta is scheduled to begin for PS4 players. Activision has announced special rewards for those who participate in the beta.

Included in the ‘MP Private Beta Combat Pack’ are ‘a unique helmet, calling card and emblem’, each bearing a gold-ringed version of the US army’s iconic star from the Second World War. Customization has already been confirmed for the game, much to the delight of the fans, with a new way of building your class being implemented; the ‘Division’ system supposedly ‘redefines how players invest in their Multiplayer career’. The new helmet suggests that cosmetic features of your characters can be managed individually, however, the details of how this will work remain sketchy.

Alongside these beta rewards, players can also receive a unique, animated lightning camo with their pre-order at participating retailers. This was announced on July 20th, and players concerned with the potential threat to immersion should not be worried as the camo will be exclusive to the Nazi Zombies mode of the game.

Whether or not this instalment in the Call of Duty franchise will act as a revitalisation of the series’ previous popularity remains to be seen, but following the success of Battlefield 1 there certainly seems to be a market for historical shooters.

Call of Duty: WWII’s multiplayer beta starts August 25th on the PS4, ending on August 28th with ‘other platforms to follow’. The official website says the next beta will take place on September 1st-until the 4th for Xbox One and PS4, but the Twitter announcement states that ‘actual platform availability and launch date(s) [are] subject to change’. Beta codes are available with each pre-order.

Call of Duty: WWII releases on November 3rd this year on all platforms, excluding the Nintendo Switch.

FusionFall, the Cartoon Network MMO, is Being Revived. And Remade.
Which Are The Best Online Video Games?