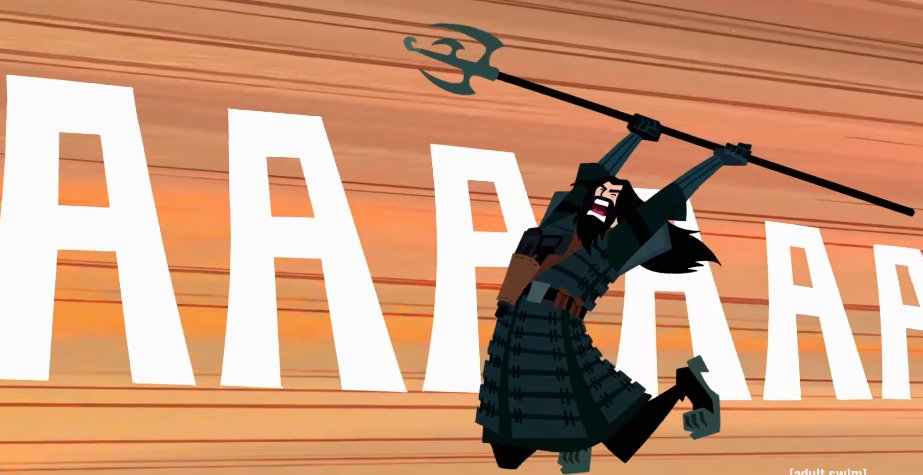 Samurai Jack started out as a Saturday morning cartoon on cartoon network way back in 2001 and was then canceled in 2004. Despite a raving fan base and critical acclaim, the show then went into a 14-year hiatus, until show head Genndy Tartakovsky was able to revive it through Adult Swim’s revamped Toonami Segment. Since the majority of the viewer base for the original seasons were all younger then it makes sense for the show to take a more adult orientated approach.

The second episode of the new season takes full advantage of the new rating and network. With darker colors and darker themes, we begin to see Jack unravel. Near the beginning of the episode we see Jack decimate a new bug bot with little effort. Shortly after he is confronted by the vicious Daughters of Aku and proceeds to get beaten down like no other opponent has done before. Beaten and battered, Jack tries to escape using the cover of the rain to find a small piece of rubble to hide under. He is then confronted by his darker side that is insisting that he should commit suicide. Telling him that there is no point and no matter the perseverance he shows he will fail. Jack retorts with “I always find a way; they’re just nuts and bolt.” After making a break for a nearby ruined temple, under the pursuit of the Daughters we are treated to a series visual wonders, ranging from a sword fight in the dark to a very dangerous game of hide and seek.

Running parallel to Jack’s battle with the Daughters of Aku is a similar story about a wolf trying to survive an ambush from 3 much larger tigers. This counterpart to the main story is a marvel of modern television. While it may be perceived as a simple metaphor; it really is much more than that. It perfectly encapsulates the struggle that Jack is going through and was the perfect design choice for this episode. As jack starts to escape out of the temple he is confronted by one last Daughter of Aku. A short battle ensues that ends up with Jack weaponless and out of options, as the Daughter goes for the killing blow jack reverses her attack slitting her throat. This moment alone shows just how far Jack has come as a character. When we see the shock in his eyes when he realizes what he has done, it becomes apparent that Mr. Tartakovsky has something very dark in store for this story of a samurai trying to get home.

Jack then escapes temple through a hallway but not before caving the whole structure in. As Jack slowly drifts down the river, blood in the water around him, all we can do is wait to see where his story goes next. Wherever the story takes us I know that I’m ready for what the creators have in store.