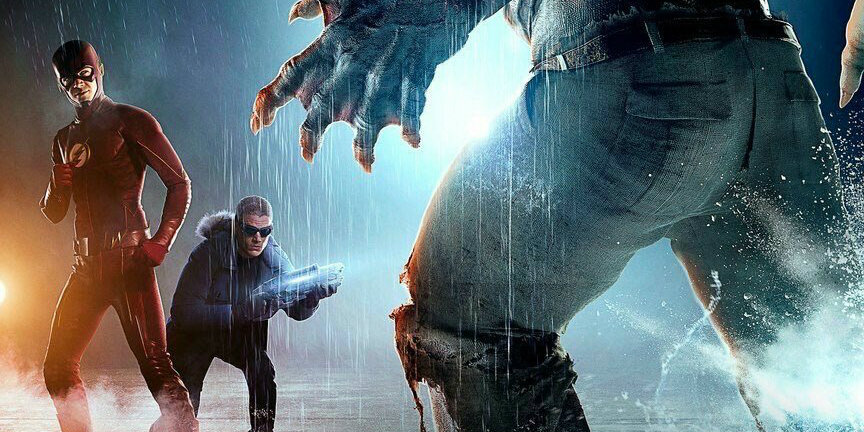 In the penultimate episode of The Flash season 3, Tracy needs an incredibly rare power source to make her “Speed Force Bazooka” work on Savitar. Cisco tracks this source to a nearby location. Leftover tech from the Dominator invasion of their planet is being held in an ARGUS base that has meta-human dampeners that prevent the usage of superpowers. Barry has no experience breaking into places, so he travels back in time to grab Captain Cold from his adventures on Legends of Tomorrow during their first season. The two break in, grab the tech, and leave once they convince Director Lila Michaels that Barry is worthy of the tech.

From there, Tracy finishes her work on the bazooka and Iris creates a message for Barry to find should she die as she is foretold to. Wally and Joe take her to Earth 2 to hide with Harry and to prevent Savitar from finding her. However, Savitar, disguised as the Flash, gets HR to accidentally tell him where Iris is hiding and, by the time Barry returns from dropping Cold back off with the Legends, he finds her on Earth 2. He breaks Wally’s leg and takes Iris before Harry or Joe could do anything to stop him. Cisco goes off to challenge Killer Frost while Team Flash tries to stop Savitar. Their plan fails as Savitar manages to overcome the effects of the bazooka with the help of the Philosopher’s Stone. The episode ends with Savitar stabbing Iris through the heart while her message to Barry plays, reciting her vows and becoming his wife.

Overall, this was a good episode. The beginning portion was really fun, especially seeing Wentworth Miller return to the show as Captain Cold. There were a lot of fun references in the ARGUS base such as mentions of Gorilla Grodd and Cupid. Another reference to the DC Comics character Cheetah foreshadows her eventual inclusion in the Arrowverse. There are also plenty of direct references to Legends of Tomorrow in the episode, such as Cold making a joke about having experience losing a hand and him saying “no strings on me”, his final words before he dies at the end of Legends season 1.

The best part of the episode by far was the latter half. There was a good amount of setup throughout the season to make the events to come emotional, but this episode ramped up the acting and drama to make it even more impactful. While Flash was given a good reason to be off doing his thing, the rest of the cast was worrying about their own potential for making mistakes and letting Iris die. Every single one of them had their own take on it and played their roles quite well. When Iris’ death finally occurred, the writers stuck to their guns and let her die. I think this is very important because most audience members (myself included) were probably expecting them to find some way out of this situation. The fact that they failed, and the message from Iris playing at the end especially grounded the moment in an intensely emotional realism that is oftentimes lacking from The Flash.

What didn’t work in this episode were some strange choices made with the plot. For starters, why was King Shark guarding the Dominator tech? This is something I have been wondering since last week’s episode ended and it is never explained. It was entertaining, sure, but it made no sense. There’s also a moment that I thought was dumb initially but ended up not being as bad later. Savitar receives updated memories of Barry traveling to grab Cold and steal the Dominator tech. Instead of sending Killer Frost after them, he decides to act like a classic, cheesy Bond villain and let them do their thing because “it won’t matter.” It ended up not mattering, but it still came across as over the top and dumb.

There’s still one episode left this season and hopefully the writers don’t bring back Iris. I think the character is great and I have nothing against her or the actress that plays her, but they shouldn’t diminish the impact her death had by bringing her back. This is a mistake they made in Arrow many times over and it should not be repeated in The Flash.