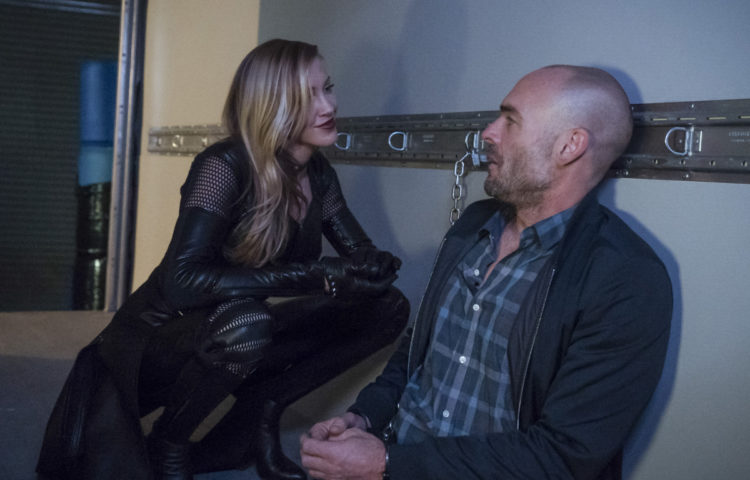 This week on Arrow, Prometheus sets his final plan in motion. It is revealed that Prometheus’ group has been kidnapping members of Team Arrow one by one and Curtis, Thea, Quentin, Felicity, and Diggle are all taken this episode. Oliver gets a surprise visit from Malcolm Merlyn, who has just been dropped off after his time with the Legion of Doom on Legends of Tomorrow. The two team up and argue over what measures to take to stop Prometheus. After it is revealed to Oliver that his son has been kidnapped, he works with Merlyn to free Prometheus from ARGUS so that no harm will come to his loved ones. Prometheus takes them all to Lian Yu where Oliver arrives with Merlyn and Nyssa al Ghul to prepare for the final showdown next week. The episode ends with Oliver approaching Slade Wilson and asking for his help.

This was a great episode with a few minor flaws. I especially liked that the episode started with some levity, celebrating Oliver’s birthday and keeping the character development between Felicity and Oliver constant with some dialogue at the party. It was obvious that Prometheus was up to something and surprising that Team Arrow didn’t see it coming last episode. However, this episode clears up that problem by showing that Oliver knew he was up to something but let his guard down because he just wanted to believe it was over. Merlyn and Nyssa’s return to the show was great as well.

I’m very pumped for this finale, mainly considering the return of Deathstroke and seeing what it’ll take for him to actually help the Green Arrow again. There was also a very rough but well-acted couple of scenes where Oliver contemplates suicide in his past while being tortured by Kovar. In it we get to see a bit more of Laurel, which is always nice considering her character’s death in season 4, and the return of Yao Fei, the man whose hood Oliver dons as the Green Arrow.

What didn’t work is something I haven’t been a fan of ever since this season started. Actress Katie Cassidy does an excellent job playing a villain, in fact I think she’s better playing Black Siren than Black Canary. However, her introduction into Arrow was not handled as well as it could have been. Fans of all the CW shows know that Black Siren is the Earth 2 doppelgänger of Laurel Lance who was brought over to Earth 1 by Zoom in The Flash last season. However, not only was this explained in a throwaway line when she came back, they didn’t take the time to explain it to the audience. As such, fans of just Arrow are no doubt still very confused as to the whole multiple dimensions bit of plot that was forced in from The Flash. It works just fine on that show and it could work on Arrow if they took the time to explore it a bit more, but they don’t.

It was handled very poorly in this episode too since Quentin goes from believing it’s his daughter (which, by all rights, he should) to accepting she’s from another dimension way too quickly. Considering how long he spent trying to grasp the fact that she died in the first place, he accepted it far faster than he should be expected to. This is why I feel this plot point should have been introduced a bit earlier in the season, so that this episode would’ve kept its focus on Prometheus and his plan, like it should have. However, they waited and had to rush it in there instead of doing it early or waiting until season 6, where Katie Cassidy has been confirmed a series regular once more.

Overall, I liked the episode a lot. We got to see the return of a lot of different characters and moments from previous seasons, which is important since it’s all supposed to come full circle by next week. The plot with Black Siren could be handled better, but I still appreciate seeing the character and the actress do her best work in the series. Next week has some big shoes to fill considering all the plot it has to wrap up both past and present. Seeing as the rest of Arrow season 5 has been great, I’m not worried.