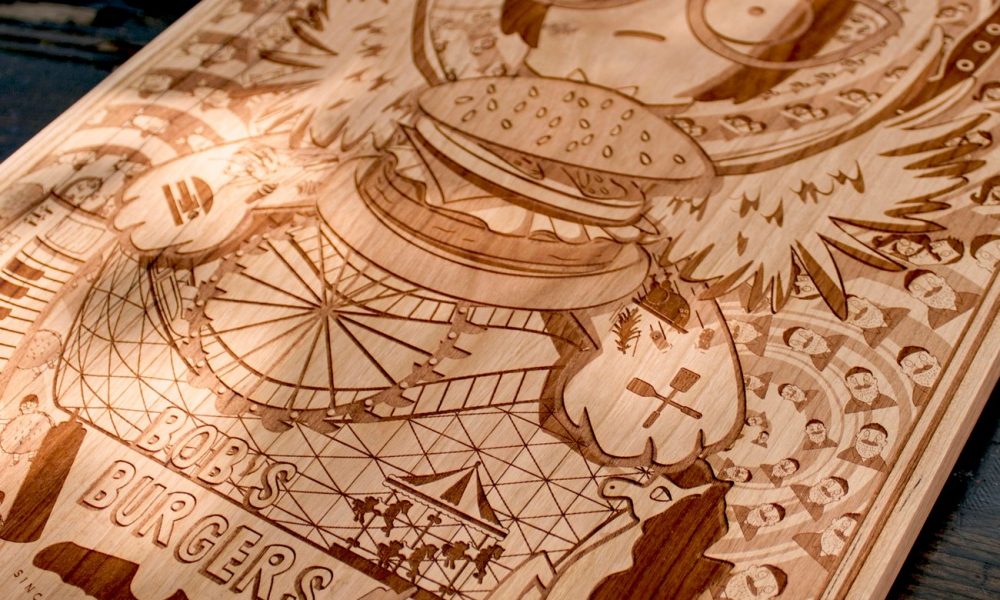 Every so often, you come across a piece of video game or geek merchandise that is just too good to pass up. Sometimes it’s a statue of your favorite fighting game character; other times it’s a prop gun, and rarely, very rarely, it’s a work of art anyone can appreciate, not just gamers or geeks.

SpitFireLabs is a small company run out of Brooklyn, NY and owned by a husband and wife team that specializes in beautiful, laser-engraved wood pieces. Each art piece is made out of cherry hardwood (and occasionally a birch plywood inlay) and treated with natural, non-toxic chemicals. Furthermore, the company does its best to obtain materials from local sources, because it’s just that forward-thinking.

SpitFireLabs’ products tend to come in two sizes: 11.5″ x 17.5″ and 5″ x 7.” These laser-engraved pieces of art feature a wide variety of subjects but tend to focus on television, movies, video games, and pop culture. Some examples of the company’s work includes the ever meme-worthy Pickle Rick: 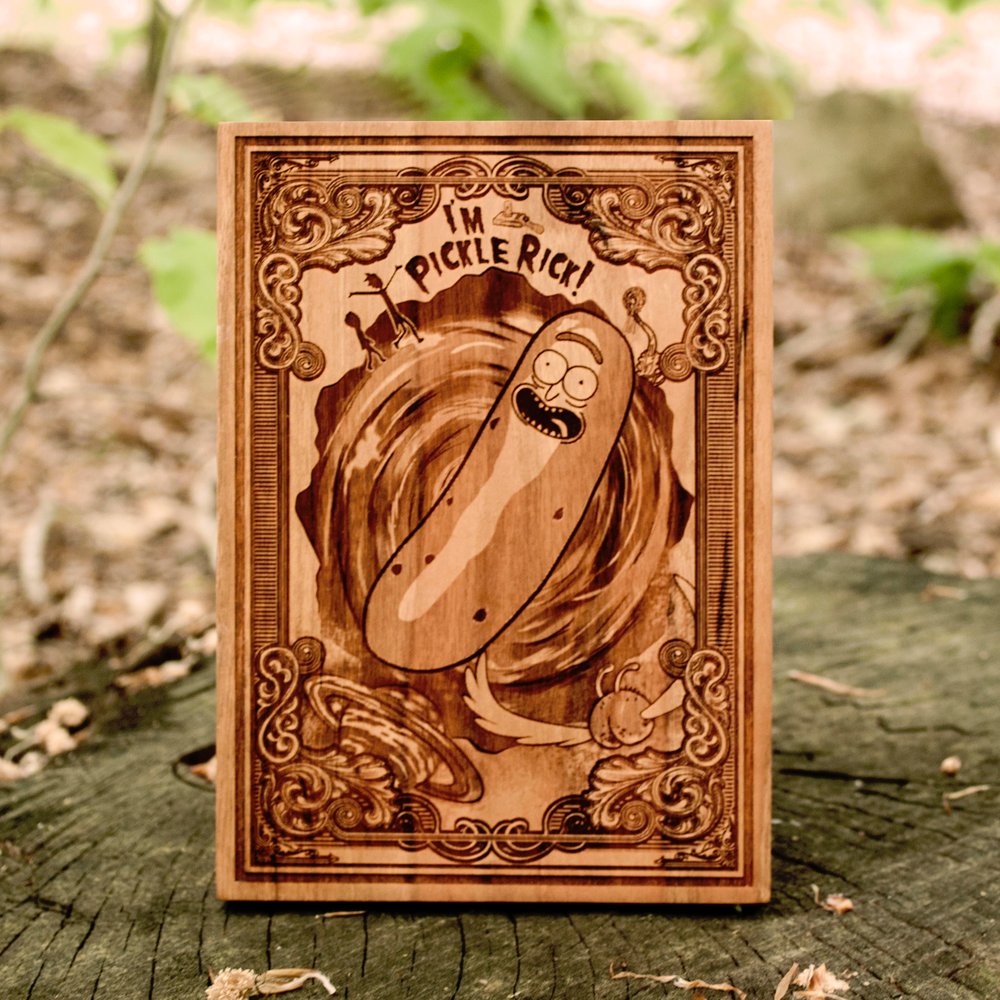 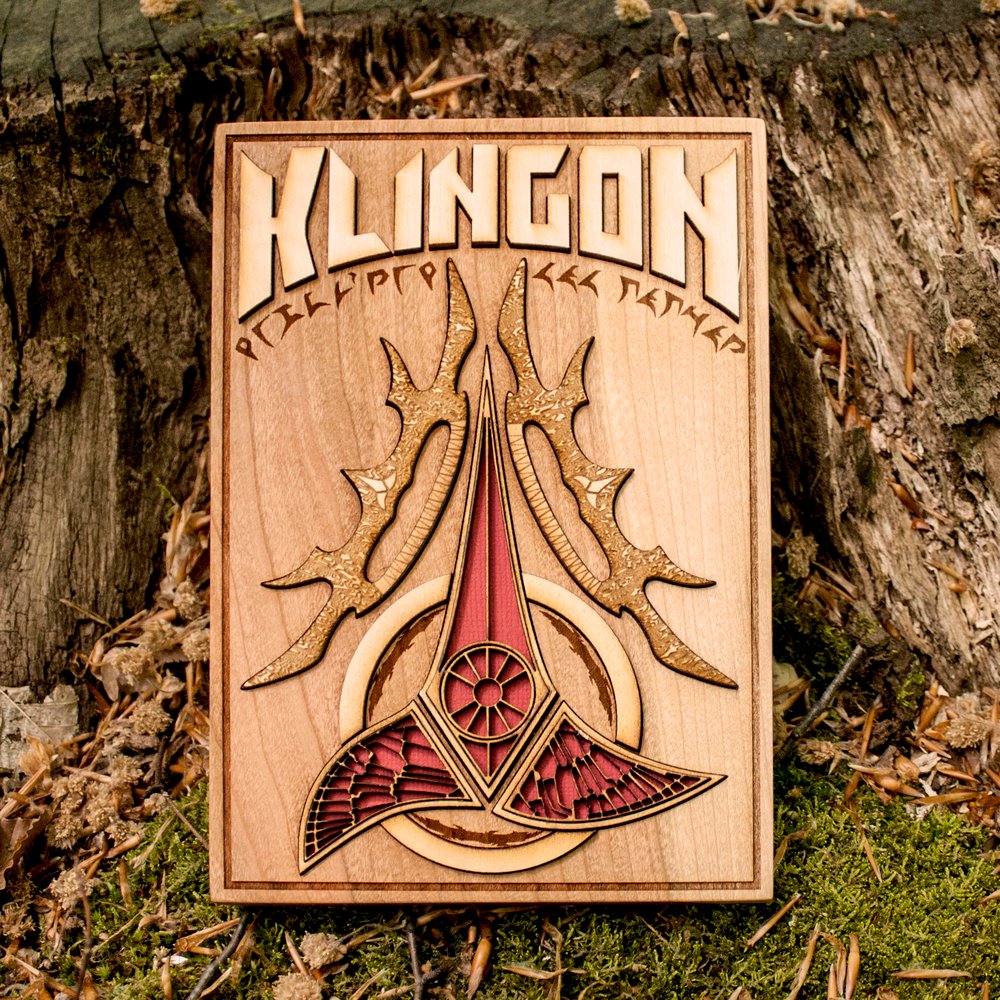 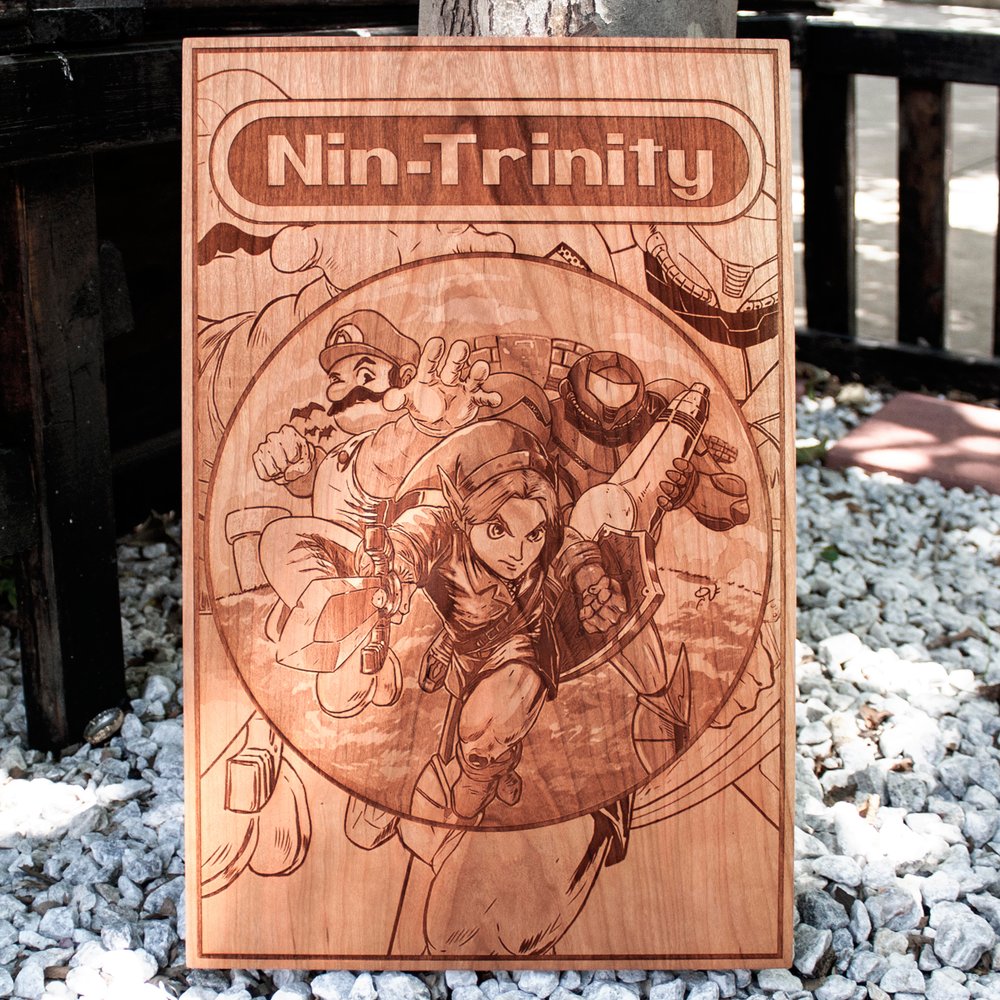 SpitfireLabs also occasionally delves into folklore and mythology. Some of these pieces of art include a depiction of the legendary Norse wolf Fenrir: 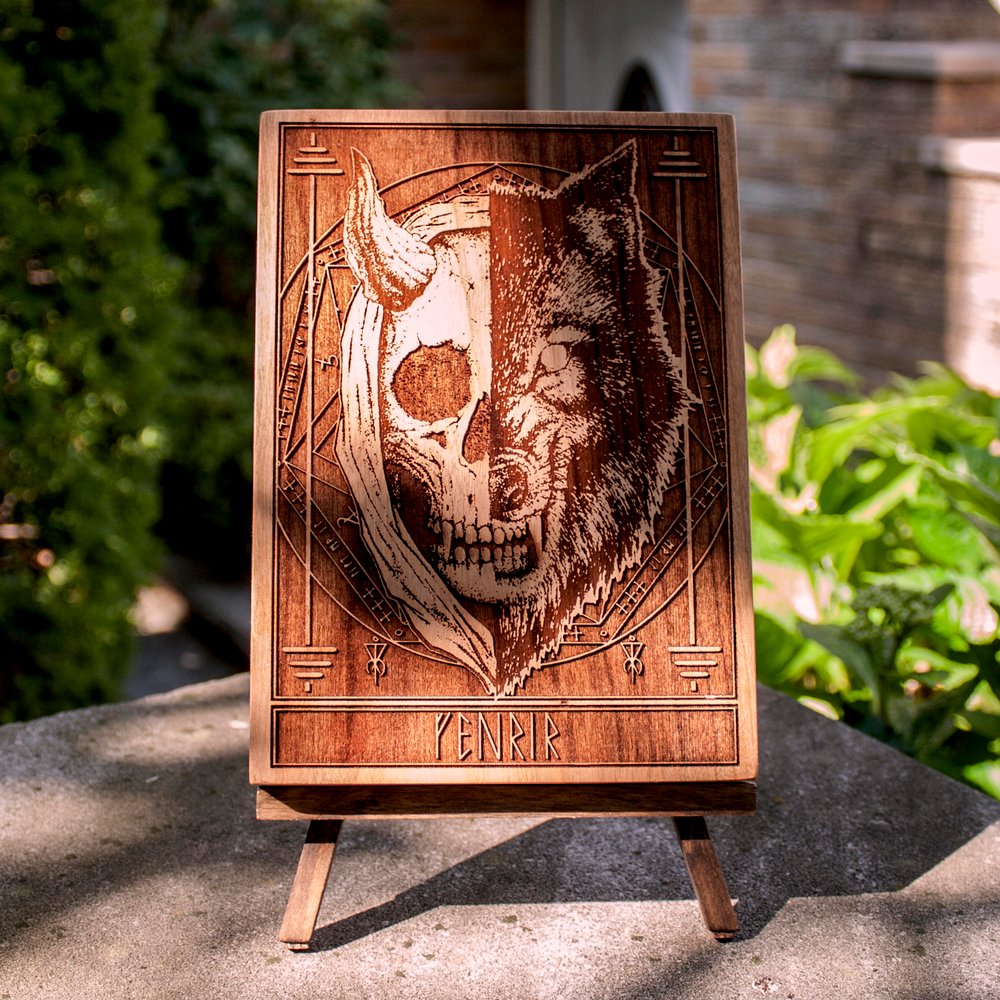 And a fully-functional Ouija Board with optional planchette: 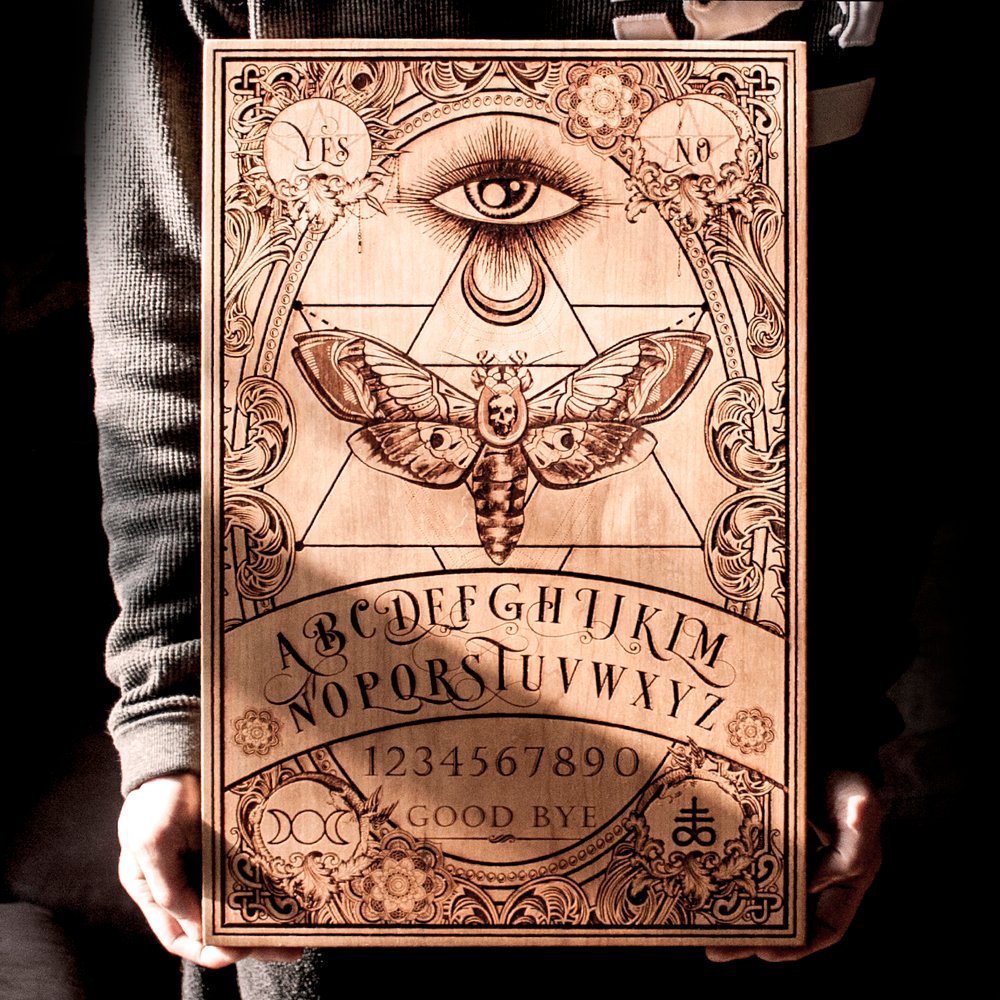 Some of the company’s work doesn’t easily fit into the above categories, though. Some, such as the Hunter and Shaman plaques, are inspired by World of Warcraft but don’t feature any art, armor, or characters from the game. Others, such as Cobra, are inspired by tattoos. And then there’s Dia De Muertos, which features a woman with candy skull style face paint. 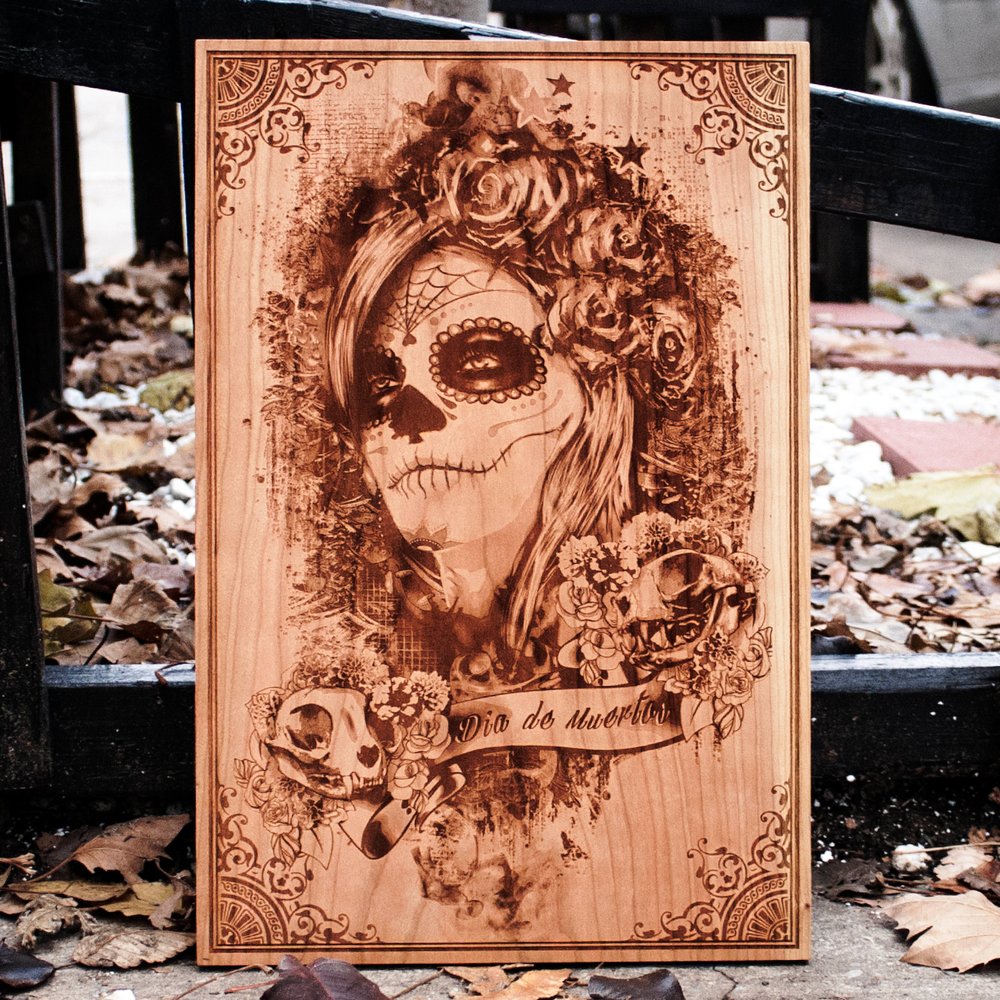 However, SpitFireLabs doesn’t just specialize in beautiful wooden boards. The company also produces humidors (boxes meant to store cigars, cigarettes, and other tobacco products), skateboard boards (wheels sold separately), and 16oz glass mason jars. But, out of all of SpitFireLabs’ products, its wooden NES cartridges and controllers are arguably its most impressive and beautiful. These pieces are where the company shines, as they are 1:1 scale pieces of laser-engraved wood brimming with detail that just pops. The front of each piece looks like a NES catridge and controller with fantastic ingrained detail, but owners can flip them over to show off in-game scenes minus the cartridge/controller layout. Display stands are sold separately, but each comes with a symbol associated with the game to complete the effect. 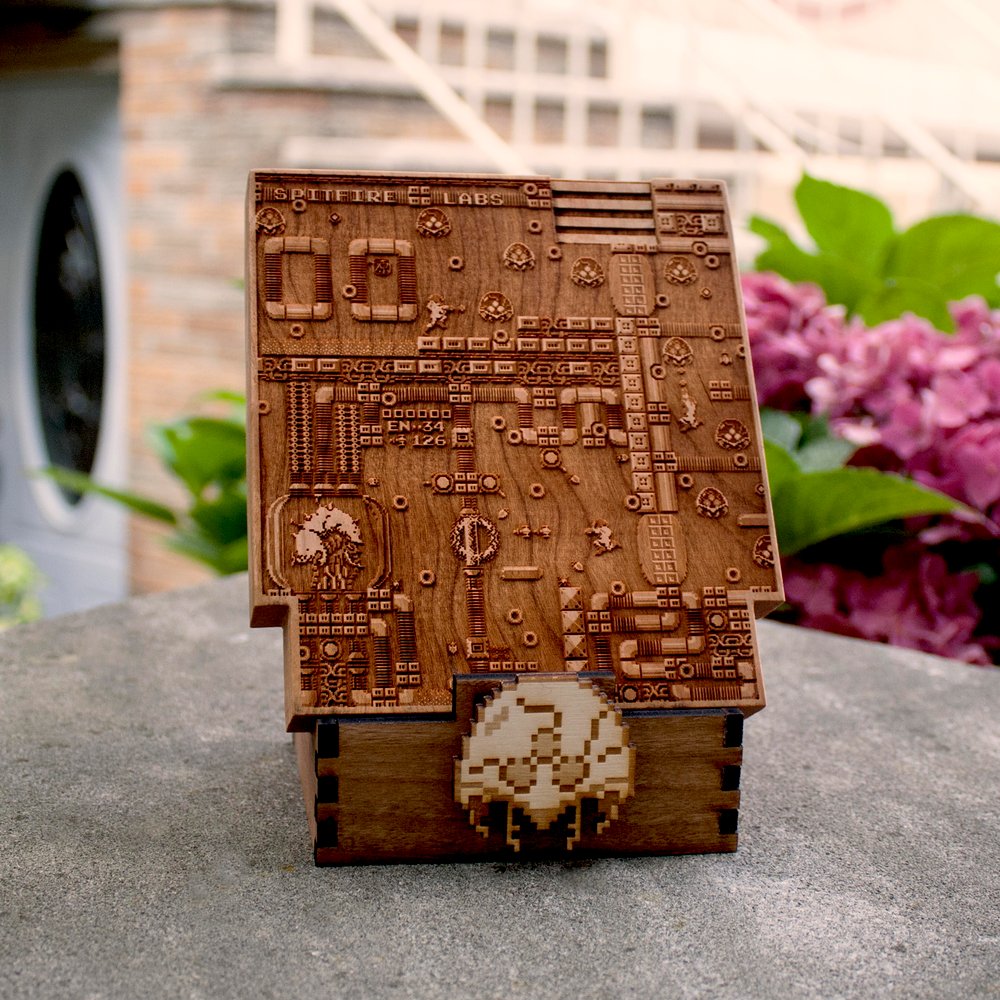 Prices range wildly for SpitFireLabs’ products. The least expensive items are the cartridge and controller stands at $15 and $25 respectively, followed by the controllers at $35 (all sold out right now). The 5″ x 7″ engraved plaques range from $50 to $65, and the cartridges are all also $65 (sold out as well). Meanwhile, the mason jars are $75 for a set of six (again, sold out). Finally, the 11.5″ x 17.5″ plaques cost a whopping $200, and the skateboard board and humidor cost $250 each.

Each product from SpitFireLabs is made in small batches, so they are available in limited quantities only. Once they’re sold out, they’re gone for good, at least online. The company usually stocks up on a few extra pieces for conventions. SpitFireLabs also works on custom commissions, which will please many potential customers. I didn’t even know about this company until I visited New York Comic Con, and I just happened upon the booth by accident. I do not know what other conventions the company attends, but it’s safe to assume SpitFireLabs will attend the next New York Comic Con.

I look forward to whatever SpitFireLabs does next and highly recommend its products, both existing and in-development. The company is always working on something new, so if you don’t see something you like, wait a bit and you just might be surprised. Fingers crossed for a laser engraved Game Boy featuring Pokemon Red and Blue sprites.