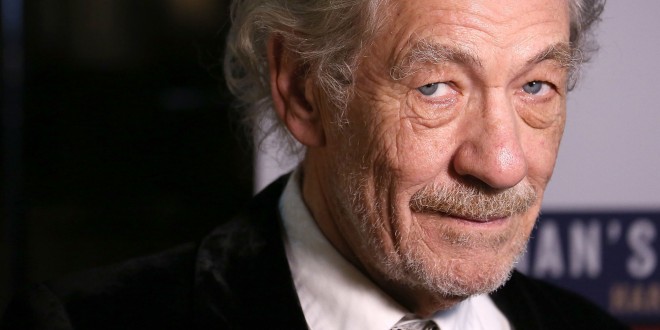 Recently in an interview with Gay Star News, renowned actor Sir Ian McKellen told the story of how he was evicted by Taylor Swift from the New York apartment where he had stayed for a while. The apartment was owned by Peter Jackson, the director of Lord of the Rings and the Hobbit trilogies and after McKellen played Gandalf in his movies, Peter Jackson let Sir Ian McKellen to stay there for free.

Sir Ian McKellen actually enjoyed Taylor Swift’s songs he even recited “Bad Blood” in an interview with Yahoo in July and his co-star Patrick Stewart from the X-Men movies even tweeted “So @IanMcKellen recited Bad Blood and I did Blank Space on @NPRAskMeAnother. May we join the squad, @taylorswift13?” The reason why Stewart mentioned the “squad” is because of the very well known fact that Taylor Swift is very attached to her friends. Unfortunately, McKellen doesn’t seem to be one of her friends and after she has bought Jackson’s apartment she immediately evicted Sir Ian out of his home. Although he was forced to leave his apartment before he was ready, he actually said in the interview that she had every right to buy the apartment. Also after the incident she did asked him and Patrick Stewart to appear in one of her shows in LA but McKellen had other stuff to do that night.

Taking in consideration that he is a very known and loved actor that has played Gandalf in the Lord of the Rings and the Hobbit trilogies, Magneto in the X-Men series and may more, Taylor Swift could have been more patient and let the actor leave as soon as he was ready, she shouldn’t have made him be evicted. Seeing how Sir Ian McKellen didn’t make a big deal out of it, he even speaks about it as a funny incident it shouldn’t bring to much hate for Taylor Swift.