Algorithm can paint like Van Gogh or other famous painter 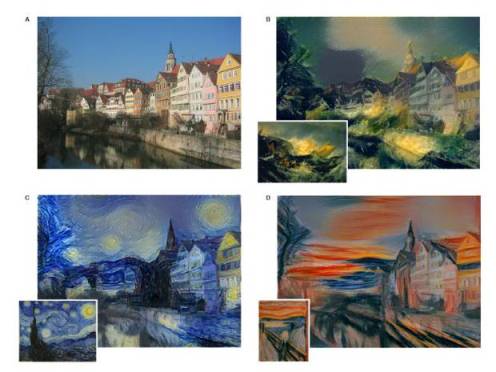 Algorithm can paint like Van Gogh or other famous painter

For a long time humans have been able to create artistic images, turning their visual experiences into paintings, using dozens of personal styles. Scientists have failed to make a computer or a robot learn how to paint, until now…

A team of German researchers from the University of Tubingen have created an algorithm that can turn visual experiences into paintings, by learning and using the painting styles of famous painters. This algorithm uses an artificial neural network of computers to accurately learn how to paint.

Artificial neural networks are statistical learning computers that use models inspired by biological neural networks, more precisely the human brain. These networks are designed to simulate how a network of neurons behave under a certain sensory input, like an image. This technology is used in hand and speech recognition, weather predictions or medical diagnosis.

The German researchers designed a deep learning algorithm that is able to understand the personal painting styles of world-renowned painters such as Vicent Van Gogh, J.M.Turner, Pablo Picasso or Edvard Munch. The computers are fed with images of the paintings and also a random photograph.

The algorithm teaches the computer to combine the photo with a certain image of a famous painting and then transforms that photo into an image that has the signature style of the painter. The algorithm is so smart that the background objects, or the layout remains the same, while the colors, technique and brush strokes of the painter are emulated into the overall picture.

The paintings used so far are Starry night by Van Gogh, The Scream by Munch, The Shipwreck of the Minotaur by Turner and Femme nue assise by Picasso. “The system uses neural representations to separate and recombine content and style of arbitrary images, providing a neural algorithm for the creation of artistic images”, said the researchers.

These findings can offer “a path forward to an algorithmic understanding of how humans create and perceive artistic imagery” emphasized the German scientists. The findings have been published in a paper entitled “A Neural Algorithm of Artistic Style” in the Cornell University Library depository.