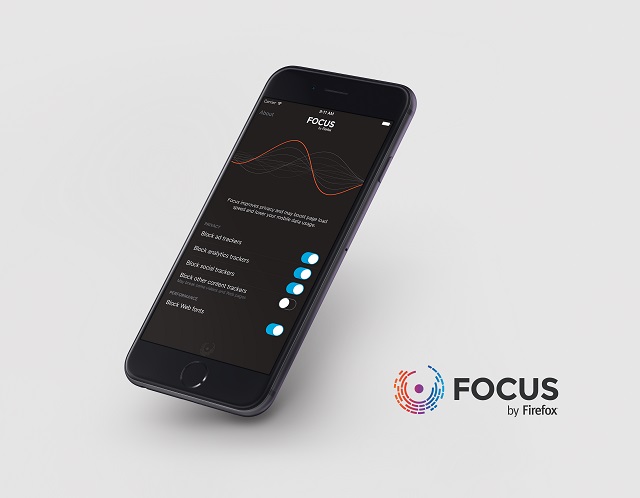 In a move to secure a better spot for itself in the mobile ecosystem, Mozilla has just released an ad-blocker for the iPhone and iPad called Focus by Firefox. Seeing as more and more people express discontent at all the data collecting and privacy issues they face with other browsers like Chrome, Safari and with Windows 10, Mozilla found it the best time to introduce a new content-blocker for iOS users around the world. Providing advanced privacy tools and ad-blocking services, Focus by Firefox will act as a filter for Safari on iOS. For those already using the Firefox browser, the company is still working on getting past Apple’s constraints on third-party browsers accessing a functionality known as “content blocker”.

With Focus by Firefox, iPhone and iPad users can easily customize their web experiences by blocking content they don’t want, such as advertisements and tracking codes online. With web experiences bombarded by analytics trackers, ad trackers and social trackers, Focus aims to give back control to iOS users. Focus is based off of private browsing, introduced in the Mozilla Firefox browser on all desktop platforms and Android as well.

In a move similar to AdBlock Plus, Focus aims to still allow ads from publishers who design them omitting tracking features. Thus, the app aims to help iPhone and iPad users set their preferences and still help content creators and publishers, without jeopardizing their privacy in the meantime. The “acceptable ads” model seems to be working as more and more software and advertising publishers try to offer ads that don’t track users and that don’t negatively impact their web experiences.

iPhone and iPad owners can download Focus by Firefox for free from the app store, which emphasizes the open source free model Mozilla stands out with. Unlike the majority of apps and browsers out there, Firefox  doesn’t rely on a proprietary ad network – which means Focus won’t have any ads either. Releasing a free app that aims to give privacy control as well as experience customization to iOS users is a pretty admirable move from the company. Although they are trailing along Chrome and Safari, Firefox might be evolving towards a better future.