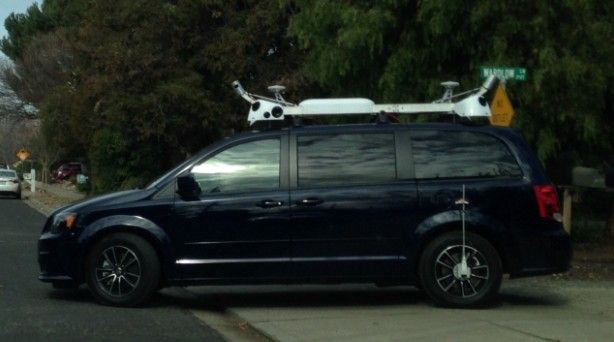 Rumors about an Apple self-driving car project in the making have surfaced this week after a mysterious black van showed up in the streets of California, outfitted with all kinds of high-tech equipment. Many started speculating that Tim Cook and co. are actually working on a self-driving car that would rival Google’s offering, invoking that Apple is getting into the business because it wants to expand its horizons. We also heard about the Apple search engine, which only fuels speculation about the company’s new ventures.

Black vans were spotted in San Francisco this week, equipped with something similar to the LiDAR, a mapping and sensing technology that is most often used in the process of making a self-driving car. The van was also equipped with multiple cameras on the top and people started jumping to conclusions about the company making its own self-driving car this year. Now the first thing that needs to come to mind when you look at the Apple van should be : Apple Maps. Apple has its own navigation and maps app, which is in dire need of improvement.

Apple is most likely working on improving Apple Maps and the supposedly self-driving car spotted in the streets serves exactly that purpose. 3D mapping technology is what the car does, most likely, so the more probable assumption would be that Tim Cook wants to get some sort of Street View feature out to Apple Maps soon. So no, Apple is not making its own self-driving car, at least not yet as far as we know. One small piece of evidence that corroborates the previous statement is that Apple doesn’t have any sort of permit for testing a self-driving car. While the company could partner with someone who does, we find that unlikely, because we would have heard about a new partnership.

Think about it, why would Apple use Dodge Caravans to test self-driving technology? The massive vehicles are in no way easy to maneuver, they are bulky and they are rather outdated. They’re perfect for hauling equipment around, though. And they are also among the taller vehicles in their category, which means more viewing angles, which translates to: mapping. If that’s not enough proof, you should know that the vans are leased in Apple’s name, which is in contradiction with Apple’s secretive policy when it comes to new technology.

The black (or deep blue) van used by Apple, outfitted with all that tech can’t be a self-driving car, because it has been spotted in multiple places over the year, all around the United States. Tests for autonomous cars are usually restricted to one area because there wouldn’t be any gain from going cross-country, unless Apple wants to make a self-driving 4×4 to explore Mars or something. At the same time, there are states in the U.S. which simply don’t allow testing of these vehicles on city streets, and the van was reported cruising around in said states (New York, for example).

Besides, there is more evidence corroborating the claims that Apple is working on 3D mapping technology. For instance, the Cupertino-based company has hired specialists like Torsten Krenz, who used to work at Navteq, as well as Philip Stanger, former CEO of Wifarer, among others who work in the data collection department of the company. The most likely purpose of the alleged self-driving car is to collect more and more data about the U.S. when it comes to traffic, routes and other things so that Apple Maps can truly become a platform that can rival with Google Maps and Nokia Here Maps.

iPhone 7: what we know so far about the next Apple flagship
Hoverboards are real, but will they work as expected?