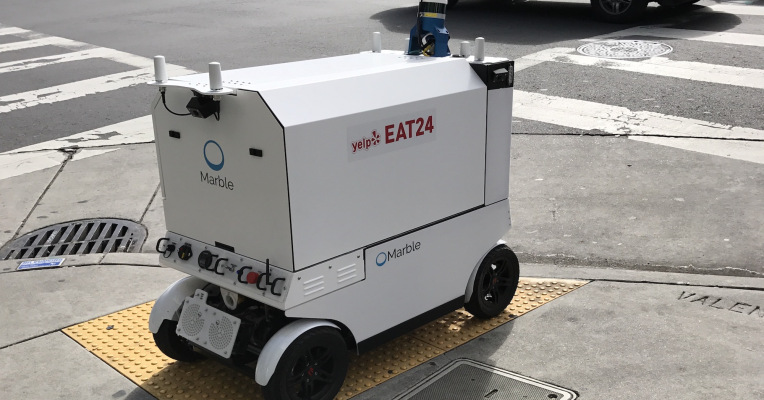 The upcoming robot apocalypse has never looked more delicious. While our future evil robot overlords might not be made out of food, they can at least deliver us our last meals before they exterminate us, all thanks to Yelp!

Ok, time to be serious. Yelp recently announced it partnered with the San Francisco robotics company Marble to test and create the Yelp Eat24 delivery robot. The device looks like a motorized suitcase, but rest assured, it is a robot.

Several restaurants in the San Francisco area, including DOA on Valencia, Truly Mediterranean, Aslam’s Rasoi, and Alhamra, have partnered with Yelp for these tests. Customers only need to place an order with the Yelp Eat24 app or on Eat24.com, accept the option to have the robot deliver food, and that’s it. Well, customers still need to receive a code via text message to open the robot’s cargo bin for their food,  but at least they don’t have to worry about a delivery guy getting stuck in traffic.

As of right now, the robot only delivers in the Mission and Potrero Hill neighborhoods. Also, keep in mind this is only a test. Yelp wants to know how people will react to these robots, and not just the customers; the reactions of restaurant staff and those who eat at the restaurants are just as important.

I know what you all are wondering: will these robots potentially replace human delivery people, and the answer is, “I have no idea but probably not.” Usually when robots replace humans, they are in the mass production setting, be it factory welders or cashiers. These robots essentially work faster than humans and can balance their increased costs to build/maintain with increased profits. The Yelp robot is as fast as a regular human delivery guy, and these food deliveries are by no means mass produced. However given the amount of money that went into producing Yelp’s robots, delivery people probably don’t have to worry about these robots stealing their jobs…yet.

Aaron GreenbaumJuly 10, 2017
Read More
New Transformers Trailer Is Exactly What We Needed
The PneuMobility Wheelchair Is a Breath of Fresh (Pressurized) Air
wpDiscuz