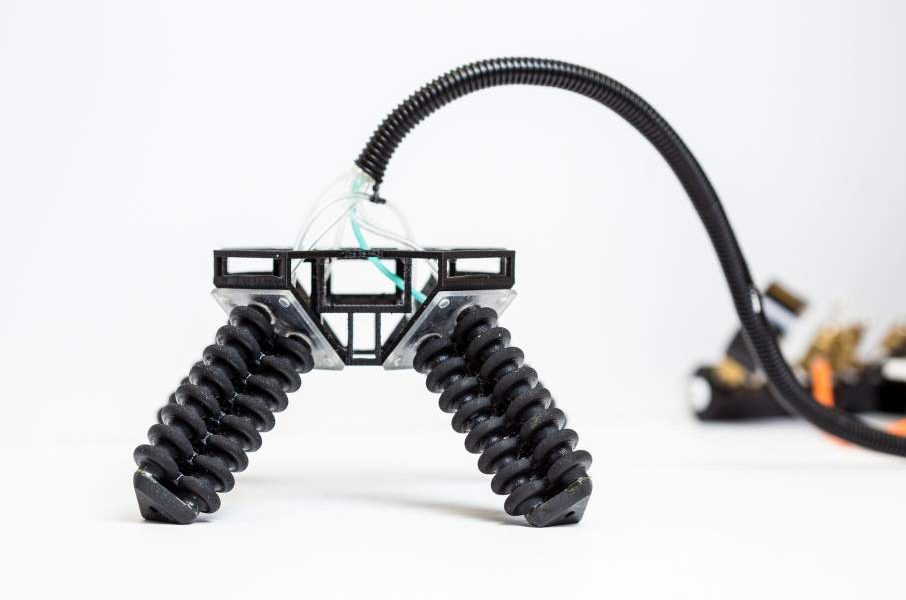 Developing robots that can move over different terrains with little difficulty is a challenging ordeal. Most robots use either wheels or mechanical legs, and each has its own advantages and disadvantages. Wheeled robots are less likely to fall over than legged robots but can’t move over rough terrain without losing balance, while legged robots traverse uneven ground more easily but risk falling over every time they lift their legs (even on flat surfaces). UC San Diego’s new robot is essentially the best of both worlds, as it can’t really fall over even when moving over sand and rocks, all thanks to its soft actuator legs.

According to UC San Diego’s video, any commercial 3D printer can create these legs, which makes them easy to produce. Due to their pliable nature, the legs can conform to their surroundings and crawl through different kinds of terrain without the need for complex sensors or software. Furthermore, the legs form an “x” that gives the robot radial symmetry and lets it travel in any direction without turning. The robot still can turn when directed, but it doesn’t need to.

You might wonder how the robot legs move if they are essentially just flexible plastic tubes, and the answer is pressurized air. Depending on how air is pushed through the legs, they deform and move in a variety of ways, not unlike octopus arms (I checked; octopi don’t have tentacles, just extremely flexible, boneless arms). Since the robot legs are a combination of multiple hard surfaces and flexible tubing, the robot is capable of a multiple forms of movement, including twisting, crawling, and shuffling. The robot’s max speed is currently twenty millimeters per second — approximately 0.045 miles per hour — but that could easily change as technology improves.

The robot may only be a proof-of-concept, but it could easily represent the future of robot locomotion. These 3D printed legs don’t require complex sensors or programs to keep balance, and they grant the robot more directional freedom of movement than traditional robot wheels or legs. Furthermore, 3D printed legs are extremely inexpensive to produce and can be printed en masse in several hours. In the future, these legs could easily become the de facto means of robot locomotion, but that day is a long way off. Still, it’s nice to plan for the future, even if it’s currently out of reach.

Aaron GreenbaumMay 22, 2017
Read More
Play From Work: Gadgets To Play With Your Dog Remotely
Dubai Marches Towards the Future with Robocops