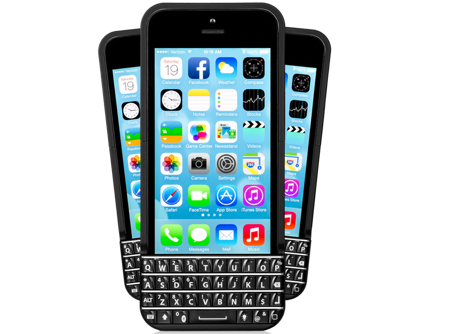 They didn’t kiss, but they did make up. Typo, Ryan Seacrest and BlackBerry have struck a deal, rather settlement and BlackBerry got the win. According to the BlackBerry press release, Typo is no longer permitted to manufacture keyboard cases for devices smaller than 7.9 inches. Typo and Seacrest agreed to the terms and the settlement, so all can be considered to be well. Typo has brought the wrath of John Chen and co upon the company and Seacrest when they started manufacturing the iPhone keyboard that endowed iPhones with QWERTY keyboards, to be used as BlackBerry phones are. Naturally, BlackBerry took offense and sued Typo for infringement. Although the case didn’t go to trial, we are glad that the two companies finally settled this dispute.

The restrictions imposed upon Typo span all across the world, so the company will not be able to sell any of its iPhone keyboards anywhere in the world, unless they’re made for devices larger than 7.9 inches in size. When Typo was first sued when they released the first iPhone keyboard case, they were made to pay about $860.000 in damages to BlackBerry, but Typo and main backer Seacrest thought that loss could be mitigated by yet another new product. The second generation Typo iPhone keyboard case, launched in February.

When BlackBerry execs saw that, it would have been odd if they didn’t take action, so they sued Typo once again. This time, however, the two companies managed to settle. To our disappointment, BlackBerry and Typo have not declared how much the company had to pay BlackBerry in the settlement, but it must have been more than $1 million according to our sources. One diligent tipster came through today and told us that the sum paid by Typo to BlackBerry was in the reach of at least $3 million, although that sounds a bit far fetched.

BlackBerry is firm about the information being confidential, so we don’t expect the settlement fee to be confirmed anytime soon. Seeing as smartphones were the main target of Typo, being restricted from manufacturing keyboard cases for the iPhone and such will serve a rather big blow to the company backed by Ryan Seacrest. What they will do and how they will reinvent themselves is up to the future. We’re expecting to see more large products from the company, though. We’re not sure how popular large tablets are nowadays, but it’s not looking for Typo at the moment.

Zach RileyNovember 5, 2022
Read More
Scroll for more
Tap
Google funds life-changing technologies for the disabled, and they want to hear from you
How to use Spotify from any country in the world, even the unsupported ones