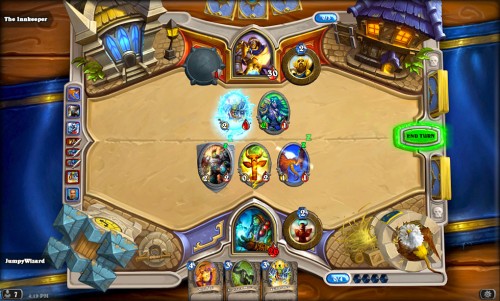 The Grand Tournament features a medieval jousting theme and card packs of 50 can be preordered right up until the 24th for $49.00. Those who preorder will receive an allotment of the new cards at random.

The two new game mechanics that will be introduced with the update are Joust and Inspire. Joust will force both players to reveal a single card from their deck, giving the advantage to the stronger of the two. Inspire will activate buffs for minions every time a player uses their hero power. Apparently, many of the new cards have been designed with the new hero powers in mind.

The Grand Tournament is the second major expansion to hit Hearthstone. Last year saw Goblins vs Gnomes, which added a similarly large amount of new content. Although Hearthstone sees a few new cards added every now and then, and update of this size is rare.

Blizzard has been steadily teasing the update by revealing a few of the upcoming cards. Now, with Hearthstone’s 3.0 update released today, the stage is set for The Grand Tournament. Players can take a look at the upcoming cards and get a feel for the new content.