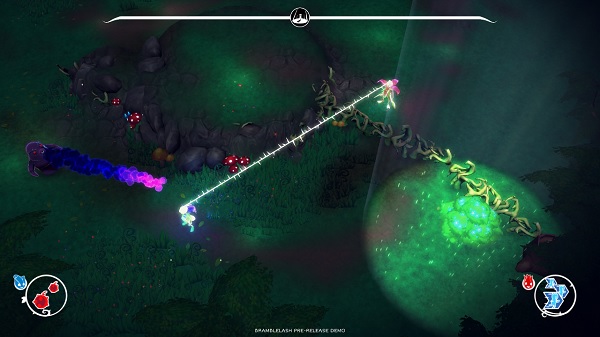 With the multitude of indie games on display at PAX Aus this year, it’s easy to get lost in the crowd. There’s a ton of games that deserve more recognition than they’re getting, which is why I want to take a moment to write about BrambleLash. A cooperative game from Perth developer ByteSprite, BrambleLash sees players connecting with each other via vines in order to kill enemies (or each other). I spoke with Liam Hunt, co-director and developer at ByteSprite, about the game.

While the co-op mode is interesting, it’s the versus mode where BrambleLash truly shines. Four players join a match and will need to quickly latch on to another player to create a lash. Once you’ve got a partner, you can start wreaking havoc on the other pair. But you or your partner can also betray one another at any moment.

Hunt explained that the co-op mode was intended as a way for players to learn the mechanics of the game before they joined in a versus match. When the game launches, it will support online multiplayer, so players will need the chance to warm up.

Hunt believes the best thing about BrambleLash is that it’s simple enough for new players to be able to pick up a controller and figure out what to do right away. “We wanted to make something that anybody could play,” he said.

BrambleLash is set for release around March or April 2016 and was Greenlit on Steam the morning before PAX. Based on what was on display at the show, it’s a game to watch out for.

Call of Duty: 2015 Race to Prestige is right around the corner
The Inspiration Behind Armello – PAX Aus 2015