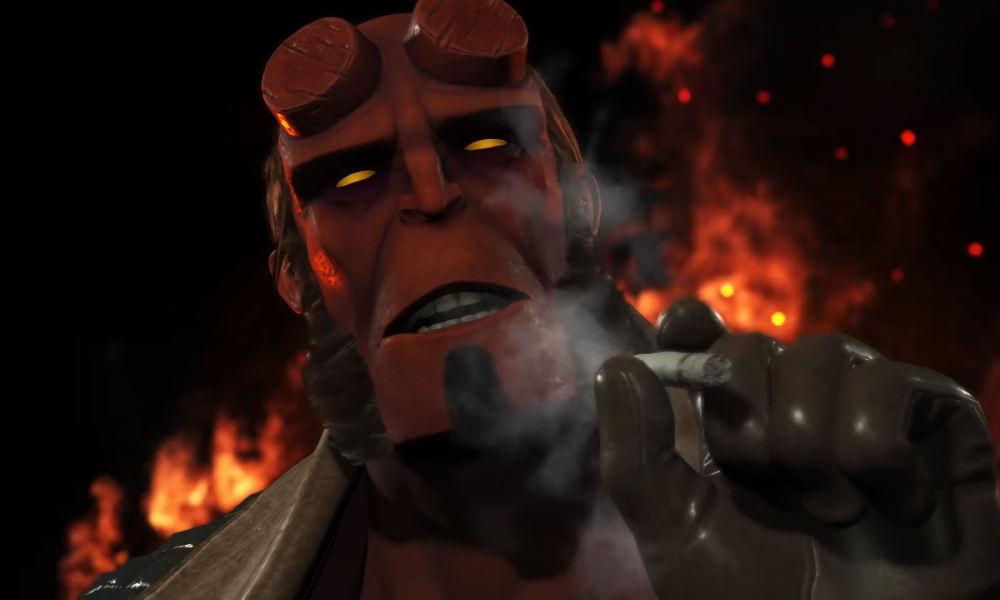 Yes, you read the title correctly. NetherRealm Studios announced that Black Manta, Raiden, and Hellboy are coming to Injustice 2. Things are about to get interesting.

Much like the announcement trailer that introduced Starfire, Sub-Zero, and Red Hood, this new trailer primarily exists to hype up the inclusion of Raiden, Black Manta, and Hellboy. However, instead of just staring each other down, these characters interact with one another, albeit by Black Manta launching shoulder-mounted rockets at Raiden (I’m already liking this version of Black Manta) and Hellboy catching one of the rockets in his iconic Right Hand of Doom. And then Hellboy uses the rocket’s exhaust to light his cigarette like the absolute badass he is. Now that’s how you introduce a character.

While this trailer doesn’t provide much information on the characters’ combat styles, aside from Black Manta’s shoulder-mounted rocket launchers and Raiden’s teleportation ability, it provides a good look at Hellboy, who appears very different from his fellow combatants. While every other Injustice 2 character is rendered in a realistic fashion that occasionally borders the uncanny valley — especially Superman and Braniac — Hellboy is extremely stylized and looks as if he jumped off the pages of one of his graphic novel. However, Ron Perlman isn’t voicing Hellboy in Injustice 2. Don’t get me wrong, though; the new voice actor captures Hellboy’s personality extremely well, but whenever I read the Hellboy graphic novels, I hear Perlman’s voice coming out of Hellboy’s mouth. I’m not upset or anything, I just would have preferred Perlman, that’s all

Now, some of you might wonder why Hellboy is even in Injustice 2, as he belongs to Dark Horse Comics and not DC. Well, I think we can chalk this up to NetherRealm Studios’ love of guest characters. The company’s previous game, Mortal Kombat X, includes guest appearances by Jason Voorhees, Leatherface, The Predator and The Alien. Furthermore, both Injustice 2 and the original Injustice game revolve around the existence of alternative universes, so the inclusion of comic book characters from non-DC universes such as Hellboy actually makes sense when you think about it.

I look forward to the announcement trailer for the final three Injustice 2 DLC characters, especially since we now know DC and Mortal Kombat characters aren’t the only possibilities. While it might be a bit of a stretch to hope for a Marvel character, I personally would like to see Image Comic’s The Savage Dragon or 2000 AD’s Judge Dredd. If not, well, there are plenty of Vertigo Comics characters to choose from, such as John Constantine and Dream of the Endless.

Prepare to Be Spooped with the Humble Spooky Horror Bundle
What Metroid: Samus Returns Could Mean for the Franchise