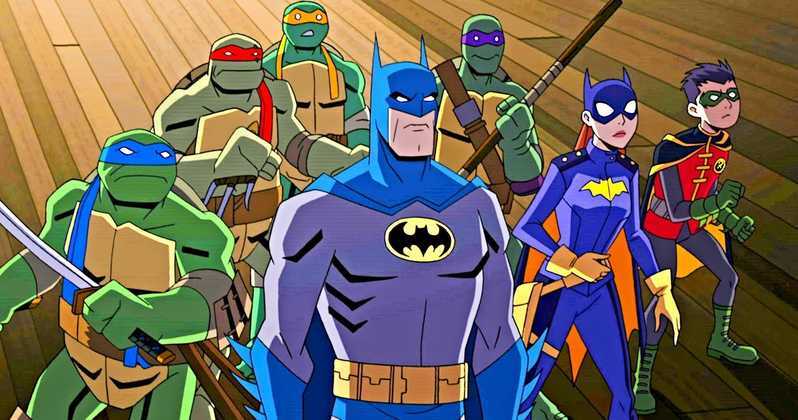 The green mutated group of turtles and a large cast of DC characters will all make their appearance in the upcoming film, including iconic voice actor Troy Baker (The Last of Us, Infamous: Second Son) as both Batman and the Joker. While both of these roles may not be completely new to the veteran voice over legend, it will be a first time that he — or any other actor for that matter — will playing both roles in the same film.

But Baker isn’t the only big name to drop into the upcoming crossover animated film. The likes of Tara Strong (The Powerpuff Girls) will play both Harley Quinn and Poison Ivy, Carlos Alazraqui (Reno 911) as Bane, Eric Bauza (The Woody Woodpecker Show) as Leonardo and Saturday Night Live star Kyle Mooney playing Michelangelo. There’s plenty of other DC and TMNT characters a part of the character line-up, leaving a massive cast to support the upcoming animated movie.

In an exclusive SyFy look at the upcoming movie, the star-studded cast has revealed a flurry of exciting voices to take on the roles of both DC and Turtles characters. Both Warner Bros. and DC Entertainment are teaming up with Nickelodeon to bring the animated crossover movie. The powerful and nimble turtle team will pair up with the Black Knight and take on the many familiar faces of villains found in the DC universe.

Crossover project are always exciting as it gives fans from both series a look at the occasional ‘what if’ scenario. What would happen if Leonardo took on the Joker? Well, this is exactly what this new film looks to answer. With two popular franchises teaming up for what looks to be an epic animated movie, hopefully there will be more in the future for more crossover projects involving the two universes.

Batman vs. Teenage Mutant Ninja Turtles is set to arrive this coming spring digitally and on 4K and Blu-ray format. Stay tuned for more on the upcoming animated film.