There’s Only a Few More Days to Preorder Battalion 1944 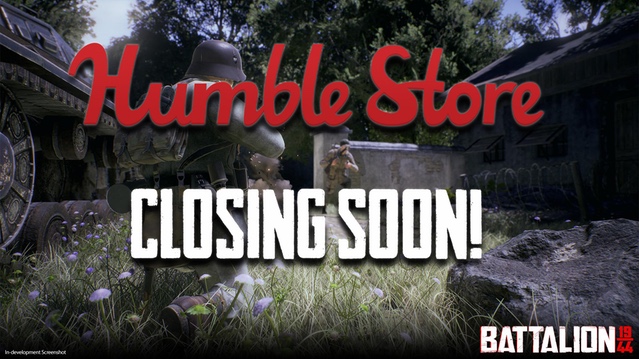 There’s Only a Few More Days to Preorder Battalion 1944

According to the Kickstarter for Battalion 1944, after March 31st you’ll no longer be able to access the Pre-order Humble Store. If you miss the cut-off, the next time you’ll be able to purchase the upcoming World War 2 Shooter will be when it hits Steam Early Access.

“Battalion 1944 recaptures the core of classic multiplayer shooters and propels WW2 into the next generation. Battalion 1944 utilizes the most advanced industry technology to create a visceral and heart-thumping multiplayer experience that has been crafted by the designers who have grown up playing Medal of Honor and Call of Duty 2.”

Battalion 1944 has players excited for its wide variety of features and gameplay reminiscent of shooter classics mentioned above like Medal of Honor and Call of Duty 2. The game is described as “an infantry based first person shooter with an emphasis on raw skill. No grinding, no ‘exosuits’, just you and your skill as a player.”

The focus on pure gameplay without time-gated content requiring grinds like levels or gear lets players get immediately into the action and play on a level playing field with players that have been playing for much longer. Of course, the veterans will still probably wipe the floor with newcomers due to the focus on pure skill – a trait that’s developed with practice and more practice.

Take a look at the trailer for Battalion 1944 from Kickstarter below.

If you want to preorder the game before the cutoff you can do so here.