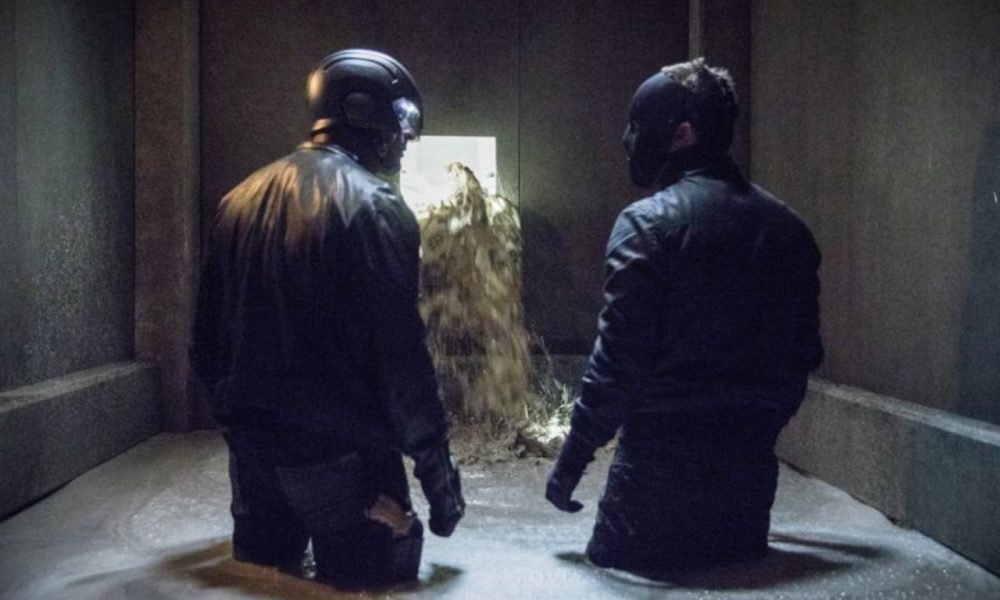 This week on Arrow, we get back into the main plot. Prometheus sends a coffin to Mayor Queen’s office with the body of an unknown man inside. It is later found out through forensic work that the man was accidentally killed by Robert Queen, Oliver’s father. Thea returns to the show and helps Oliver reconcile with the news while also dealing with her own identity crisis. Meanwhile, Diggle and Oliver track Prometheus to an abandoned building where they are trapped in a room that slowly fills with cement. Meant to be symbolic of how Robert killed the man in the beginning of the episode, Diggle and Oliver are saved by Black Canary and Mister Terrific.

Oliver and Thea meet with a man who served as the lawyer for Justin Claybourne, Prometheus’ father, and find out they’ve been in contact. After being motivated by Felicity, Oliver dons the Green Arrow outfit once more and the team fights Prometheus and his thugs. While the team deals with the thugs, Green Arrow fights Prometheus one on one. He corners Prometheus and reveals that he learned through the lawyer that Claybourne was planning on disowning his son and that everything Prometheus has done up until now has been for a lie. Seemingly broken, Prometheus submits to Green Arrow who throws him in an ARGUS prison. All the while, the episode is broken up by a continued subplot of Rene attempting to earn back custody of his daughter and flashbacks of Anatoly dropping Oliver back off on the island so he can be rescued circa episode one of the series.

The theme of this episode is in the title: honor thy fathers. This episode was very much about Robert Queen and Justin Claybourne and the effect that both men had on their children. Much of Thea’s story in this episode revolved around coming to terms with her mother, biological father, and step father all being terrible people. Oliver’s role here, beyond crime fighting, was helping his sister deal with this fact and finally showing her the message that Robert created for her prior to his death. The elements of Robert’s failings as a parent and how his children must deal with that and not focus on the past were very well done. Maybe it’s the fact that I’ve spent five years watching these characters grow, but their reactions seemed entirely in line with the characters they have become and it was very touching. The flashbacks to the island where Anatoly and Oliver discuss Robert and what he wanted of Oliver was also more impactful than I thought it would be.

There are a few things that didn’t work in this episode. For starters, the impact of Claybourne’s failings as a parent had nowhere near the impact that the story revolving around Robert did. This is mainly because Claybourne was introduced as a character halfway through this season, but we as an audience are not meant to buy Prometheus’ reaction to his father’s plan to disown him. This is especially the case since the episode ends with him smirking at the camera and the trailer for next week’s episode shows him being his usual, smug self. Along with this thought, it seemed a bit unbelievable that Team Arrow, a group renowned for their intelligence and strategy, would start celebrating so early. None of them stopped to think “Wow this was really easy. Maybe this mastermind who has given us so much trouble the past six months is up to something.”

These flaws are very minor and did little to detract from a pretty solid episode that’s up there with some of the better ones this season. The set up for the final two episodes of season five was great and it managed to move the plot forward in interesting ways for the next season. As of right now, I maintain that the seventeenth episode “Kapiushon” is my favorite this season but from the looks of where things are going, it could easily be dethroned by either or both of these next two.

Christopher WheatleyFebruary 11, 2019
Read More
The Flash Episode 3×21 “Cause and Effect” Recap and Review
The Witcher Netflix Series Will Be Based on the Novels, Not the Games