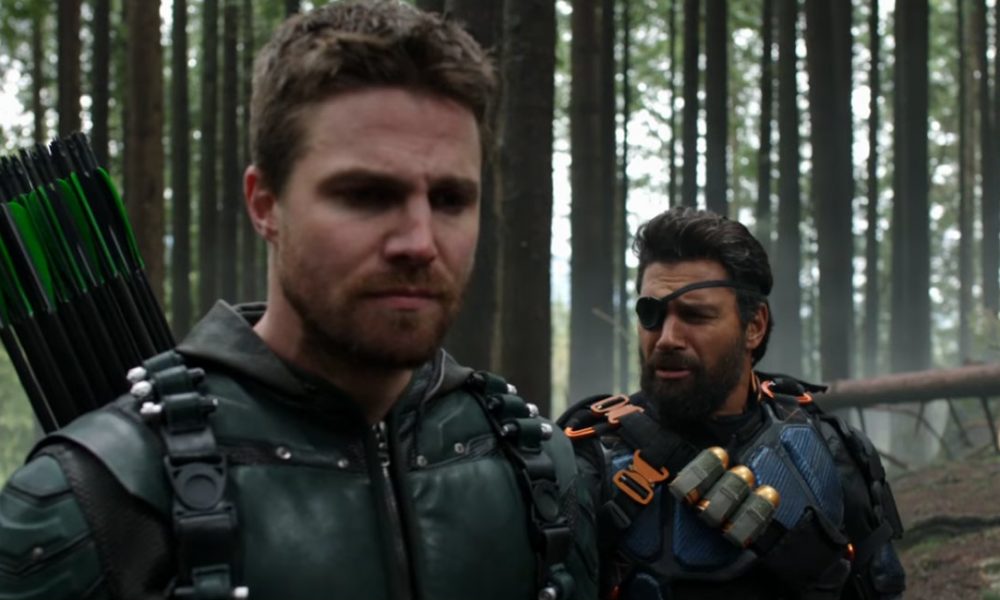 The Arrow Season 5 finale begins with Oliver approaching Deathstroke to ask for his help in saving his son William from Prometheus. He offers Deathstroke the chance to find his own son and release him from confinement if he complies. After revealing that the Mirakuru super-soldier drug is no longer flowing through his veins and he is in complete control of himself, Deathstroke agrees to help. Oliver offers the same basic deal to Captain Boomerang as well: help me and you walk. The three of them walk into a trap and it is revealed that Boomerang had already been approached by Prometheus with a better offer. When Nyssa and Malcolm arrive, Boomerang and Talia al Ghul retreat leaving Artemis behind to be captured. Oliver’s makeshift team frees Thea, Curtis, Felicity, and William’s mother Samantha from confinement and they all split up.

Thea accidentally steps on a land mine and Malcolm seemingly sacrifices himself to prevent her death and take out Captain Boomerang with him. That group arrives at a plane left by Prometheus on the island, but find that the island is covered in bombs linked to a dead man switch that will activate if Prometheus dies. Green Arrow, Nyssa, and Deathstroke then proceed to save the rest of Team Arrow and a massive fight breaks out. In it, Nyssa overpowers her sister Talia, the Canaries face off, and Oliver forces Prometheus to retreat. He follows Prometheus to a boat where he is forced to choose between saving his son or killing Prometheus and thus blowing up the island with his friends still there. He manages to free his son, but Prometheus shoots himself and the island explodes. All the while there are flashbacks of Oliver killing Konstantin Kovar and escaping the island circa episode one of the series.

This was easily the best DC finale all week. The return of Deathstroke was fantastic and it was great to see him have all his marbles back. I loved the way the writers played with the audiences’ anticipation of that character by having him double-cross left and right but still end up on Green Arrow’s side. There were a lot of cool foil battles in this episode as well. Seeing Nyssa defeat her sister, despite seeing them interact for the first time this episode, was strangely satisfying. The battle between the Black Canary and Black Siren was quick but cool as well. Prometheus was also a huge highlight considering he’s such a wonderful villain and is always 10 steps ahead no matter how much you think Oliver is catching up. Literally every situation he put Oliver in was shocking and had me wondering just how far ahead he planned all of this, especially the ending where he made Oliver choose between his friends or his son. The acting was also superb throughout, with a shout-out to Stephen Amell (Green Arrow) especially.

The most interesting aspect of this episode was the legacy it represented. Arrow has been going for five seasons now and the entirety of the time, it has been showing five years of Oliver’s life in flashbacks leading up to the very beginning of the series. This episode brought the series full circle. Not only that, this episode was an homage to the series as a whole. Season 1 was represented by Malcolm Merlyn and the flashbacks, Season 2 by Deathstroke and Lian Yu, Season 3 by the al Ghul sisters and the relationship between Malcolm and Thea, Season 4 by the romance between Oliver and Felicity and continued plot about William, and Season 5 by Prometheus and the general plot. Every single season was represented perfectly, with the Season 1 moments being especially heartfelt and powerful; I was getting very teary eyed when Oliver called his mother during the flashbacks after five years of not being able to talk to her.

My only gripes are minor nitpicks. I really hate cliffhanger endings, so ending the episode with the island exploding and all of Oliver’s friends seemingly dead was something I’m not a fan of. Also, if Malcolm did die the way he seems to have died, it’s fitting for his character but was very quick and anti-climactic for a series mainstay since the very beginning.

Beyond that this was a fantastic finale episode topping off an amazing season of Arrow. I’ll need more time to process my thoughts on the season as a whole but it might have taken Season 2’s spot as my favorite of the show. Only time will tell. 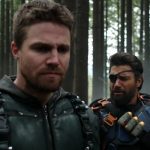 Christopher WheatleyFebruary 11, 2019
Read More
The Netflix Castlevania Trailer Makes Me Weep Bloody Tears of Joy
Pirates of the Caribbean: The Good, The Bad, and The Ugly