Better Call Saul Renewed for Season 4: What to Expect 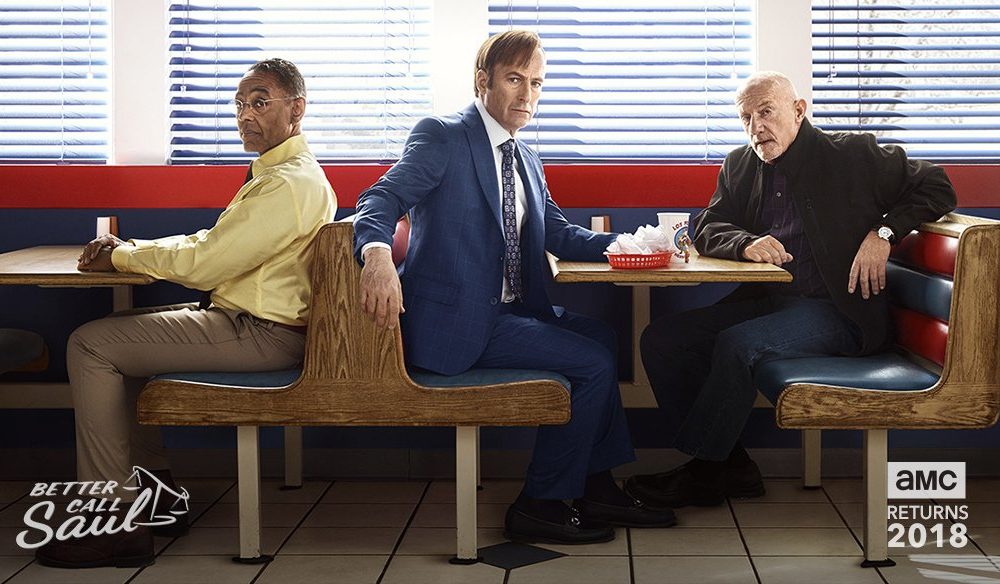 Jimmy McGill will be returning to television next year in the successful Breaking Bad spin-off Better Call Saul. AMC confirmed fans will get another 10 episodes to see the upstart lawyer’s evolution into Saul Goodman.

Created by Vince Gilligan and Peter Gould, the show stars Bob Odenkirk alongside new and returning members from the Bad cast. The plot revolves around Jimmy’s quest to become a lawyer, as well as what led up to the events of Breaking Bad, including the origins of Mike Ehrmantraut and Gus Fring.

President of AMC Charlie Collier said of the renewal: “Supporting artists we respect and admire; delivering truly outstanding character development and nuanced dramatic twists and turns; continuing a legacy of bold creative choices; loving writing that is the best in the business: Truly, ‘S’all good, man.’”

According to AMC, the third season was the third highest-rated drama on cable among adults 25-54. It averaged 3.6 million viewers per episode. In looking ahead, let’s look at what we’ve seen and what we’re expecting to see.

Warning: Spoilers for Better Call Saul through season 3 below.

Season three doubled down on Jimmy’s descent into a full embrace of criminal activity. The last few episodes felt like the end of House of Cards season 4, in that the actions of the main character seem as terrible as they can possibly get. So, where do they go from where they left off?

Season three was a realization of relationships. In the world Jimmy lives in, you live based on the connections with the people around you. Much like finding clients as a lawyer is based on networking and connections (as we saw with Kim getting the Mesa Verde gig), those relationships character’s form quite literally keep them alive.

The audience saw this idea this season with Chuck. As a hermit, Chuck only has Jimmy. By cutting him out, Chuck got rid of a nuisance, but cut himself off as well. Without Jimmy, Chuck had no one to lord over from the moral high ground. He lost his only adversary. Chuck tried to ignite a rivalry in his own firm with Howard, but he was quickly given a victory and expelled from HHM. Without anyone, either friend or foe, Chuck was out of connections, and therefore dead.

This is why the audience worries for Jimmy. In Jimmy’s illegal behavior, he lost his relationship with his brother and his clients, but grounded himself in a strong relationship with Kim. In losing Chuck, Kim is Jimmy’s only last real relationship. Without her, he has no one. Their relationship, while strong, is tenuous due to Jimmy’s frequent law breaking, most of which Kim isn’t privy to. If Jimmy goes too far and Kim finds out, Jimmy will lose his last relationship, and go the way of Chuck.

This is also why the audience can speculate on other main characters. It’s why the audience doesn’t worry about Mike. Not simply because he’s in Breaking Bad, but because he has a solid support system with his daughter in law and granddaughter, as well as the church community they belong to. It’s also why Nacho has basically been sentenced to death (or exile). Nacho lost his father because of his connection to the cartel and Hector Salamanca. His efforts to kill Don Hector prove right in the way of vengeance, but in doing so he loses the last relationship he has. Even Don Hector himself shows this. Tuco is in prison, he lost Nacho’s loyalty, and his own loyalty to the cartel is all but gone. By losing these relationships, he suffers a heart attack (and is confined to the chair we see him in in Breaking Bad).

Using this equation of relationships=life, we can guess what’s in the future of Better Call Saul.  Jimmy’s promised and eventual decay into Saul Goodman comes with a price– Jimmy McGill’s life. When Jimmy loses Kim, which will probably happen when she catches him going to far with some scheme, he loses his last connection. No brother, no clients, no partner. From this, Jimmy has only one real option– continue down the path of a criminal. Rather than die physically, Jimmy dies in name and practice– and finds himself in Albuquerque as Saul Goodman.

It’s no coincidence that Nacho doesn’t appear in Breaking Bad. With his relationship with his father broken and his attempted assassination of Hector, he is alone. If Nacho isn’t dead by the end of next season, he’ll be begging Jimmy for an out. Perhaps this is where Jimmy stumbles upon a certain Vacuum repair shop for the first time.

Mike will be the only one able to walk this tightrope and keep the people close to him there. Mike has always seemed the most morally-straight character on the show, even more than Chuck’s lawful-good persona. These morals won’t protect him, but they will maintain his relationships, which is all he needs to do.

Better Call Saul returns in 2018. Until then, we can only wait.

Christopher WheatleyFebruary 12, 2019
Read More
Scroll for more
Tap
Lucas Museum of Narrative Art Approved by the LA City Council
Spider-Man Will Not Be in the Venom Movie, Not Even as a Cameo