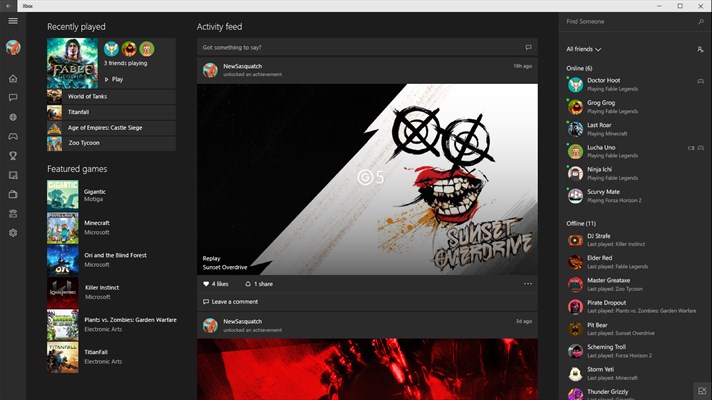 Microsoft’s Xbox Beta app is now available on the Windows 10 store. Microsoft released the app in kind of a surprise move after announcing a few days prior that Windows 10 users would be able to have an input on the Xbox app for its latest operating system. Now, they’ve unleashed the app in its beta version for the public to start playing with.

The Xbox beta app for Windows 10 is based on the Xbox One Preview Program. That was a popular program that users could opt into in order to receive updates early while they were still in their beta stages. Those users would provide feedback about the updates and would help Microsoft decide how or if those updates should be released to the wider public. Now, Microsoft hopes to achieve something similar with the Xbox beta app. They want users to provide feedback on the features that are set to come to the Xbox app.

To get the app and partake in providing feedback, download the beta app from the Windows 10 store. The Xbox beta app installs alongside the full app, rather than replacing it, so users can run both at the same time.

The latest features to come to the app include a live view of your Xbox Live friends list and easy comparisons of your gamerscore with others. The latest update also allows users to type text into their Xbox One from the app.

Feedback has become a core component of Microsoft’s strategy with the Xbox One. While the console first launched with many negatively received features, the company has changed many of those things over the course of its monthly updates based on the feedback of its users. The Xbox One Preview Program was one of the updates designed to garner feedback from users, and it became very popular and helped the Xbox One recover after some initial negative press.

The Windows 10 Xbox app is just the latest product from Microsoft to enter the beta scene. Another is the Xbox One Smartglass app, which has had its beta mode available on the Android store for some time.