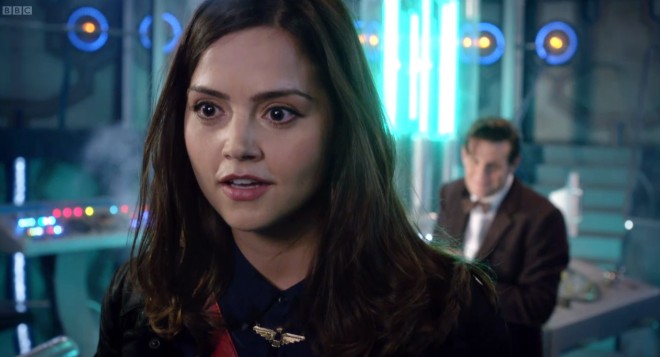 Doctor Who’s assistant Clara Oswald played by Jenna Coleman has announced that the decision of her leaving the show has already been made. There were a lot of rumors saying that Coleman will leave the Doctor Who series and they were confirmed during an interview on Nick Grimshaw’s Radio one show. Apparently she’s been thinking about leaving the precious TARDIS behind for awhile now and Steven Moffat, the writer and producer of this season has created a story for Clara so she will exit the show at the right time.

“I think it’s really cool. Obviously we’re not going to give away any details, but it will happen at some point this season,” said Jenna Coleman during the interview. Coleman has been around since 2012 when the doctor was sill played by Matt Smith. She’s been a part of this show ever since as supportive role for the confusing regeneration that The Doctor had. The new doctor now played by Peter Capaldi had some issues after his last regeneration and Clara Oswald was there for him. The reason behind her leaving seems to be a revolving around the new announcement she made, that she will play Queen Victoria in a mini-series for the British Channel ITV.

The long awaited 9th season of Doctor Who premieres today on the 19th of September. For us, viewers, we are very curious to see under what circumstances and when will Clara Oswald leave The Doctor and why she will never return. And if Clara Oswald leaves the TARDIS, who will be the next companion of The Doctor.