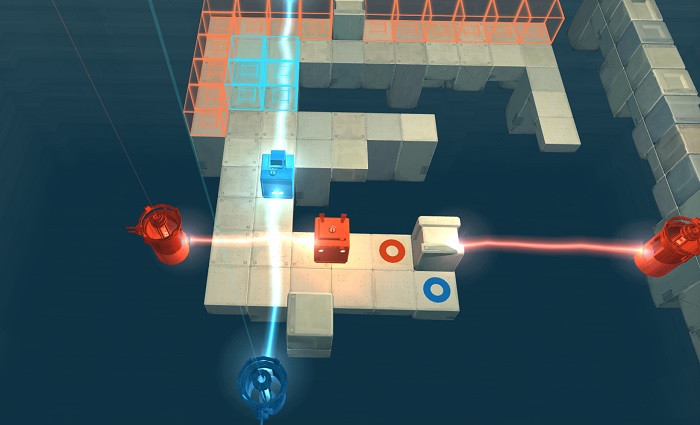 There were plenty of co-op games at PAX Aus this year, but none of them forced players to think as hard and act as carefully as Death Squared. This indie game from Sydney-based SMG Studio has players attempting to move their cubes through the levels without accidentally killing one another. And accidentally killing your partner is deceptively easy in this game. I spoke with Patrick Cook from SMG Studio about the inspiration behind Death Squared.

“The original idea was four people stuck in a dungeon, and they had to escape using buttons and levers,” Cook said. “But everything would just kill everybody with traps. And then it became a more abstract thing as it went on.”

Death Squared now features small, claustrophobic levels riddled with traps and dangers. The solutions to the levels I saw at PAX were all actually quite simple, but deceptively difficult. As soon as one player makes the wrong move, they might have killed their partner. Getting yourself or your friends killed is far too easy.

“It’s a very, very communication-driven game,” Cook said. “One thing I really like about this game is I can hand a controller to someone, and say work together to stand on your circle. That’s all the information given. That’s the thing I love about this game – it’s got a very simple premise, but it gets very challenging to complete the task.”

With the game currently at the early alpha stage, the team is still experimenting with what else to add. “We’re still at the point where we’re going to try a whole bunch of things, and just see what we can play around with and keep the things that are really fun and work.”

SMG Studio has been developing Death Squared for around a year, but Cook said it’s only been in “serious” development for three months. Currently, the game only supports local multiplayer. Cook said that online multiplayer is something SMG would like to include, but they aren’t yet sure how the logistics of an online system would work for players, given the importance of communication to getting through each level.

SMG is aiming to release Death Squared mid 2016. It will be available on PC, Mac, and Linux via Steam, and they are looking into securing a Playstation 4 and Xbox One release.