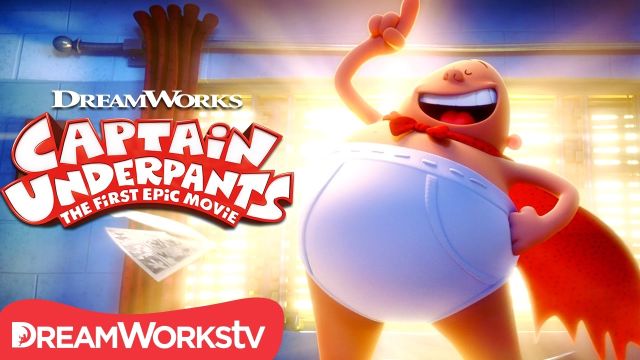 Captain Underpants is an animated film based on the children’s novel series by Dav Pilkey. First published in 1997, the series has produced twelve books, three spin offs and finally a featured movie.

Pranksters George (Kevin Hart) and Harold (Thomas Middleditch) are in trouble with their principle Mr. Krupp(Ed Helms) for going over board with their pranks. Mr. Krupps’s only solution is to split the boys into separate classes. With a last-ditch effort to save their friend ship, George uses his hypno ring to hypnotize Mr. Krupp. To their surprise is actually works. George and Harold make Mr. Krupp believe he is a super hero from their own comics, Captain Underpants.

Dreamworks has been trying to make Captain Underpants movie since the first book was originally published. Dav Pilkey was never interested in selling the rights for a movie version. In 2011 Pilkey was ready for Captain Underpants to become a motion picture. He realized a film could “properly convey what he was trying to do with the books” based on “the subtle way that morality and personal responsibility were handled” in How To Train Your Dragon and Kung Fu Panda. CCO Bill Damaschke of Dreamworks was able to secure the rights to finally make their film adaptation.

Set to release June 2nd, 2017. Check out the humorous trailer of a grown man running around in underpants.