NASA confirms the existence of liquid water on Mars 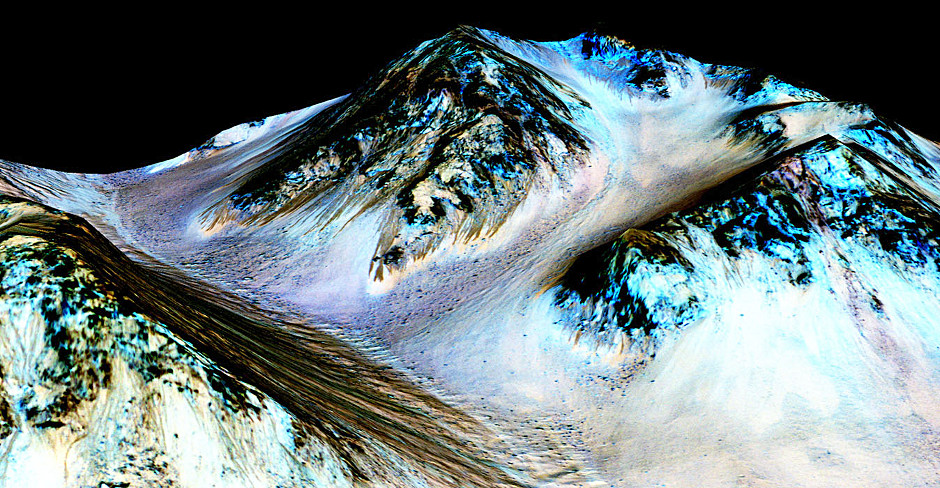 NASA confirms the existence of liquid water on Mars

Today, scientists from NASA solved one of the major Mars mysteries: does the Red Planet have liquid water on its surface? The answer is yes. NASA’s Mars Reconnaissance Orbiter (MRO), a spacecraft that orbits the Red Planet has confirmed that specific geological features from the surface of Mars, dark narrow streaks are made by liquid water.

Until now, scientists knew that water existed on Mars, but only as its polar ice caps. Earlier this year, the rover Curiosity found that liquid water is present under the Martian surface. In 2010, the MRO detected some interesting features on the Red planet – dark narrow slope streaks that look like some kind of liquid flowed there. They were larger during Mars warmer season and became narrower and shrank during Mars colder season.

Using an infra-red spectrometer from the MRO, the scientists revealed that the dark streaks were composed of hydrated salts, such as perchlorates or sulfates. They have the property of absorbing atmospheric water and can lower its evaporation rate. “What that seems to be telling us is that water plays a key role in the formation mechanism of these features,” said Lujendra Ojha, author of the study on Mars’ water.

The Reccuring slope linae, as the streaks are officially called are formed near the Martian Equator and during periods of warmth, when surface temperatures can reach up to 70 degrees Fahrenheit (23 degrees Celsius). The salty water then flows downhill on the planet’s sloping geological features and leaves a darkish mark on the surface.

Until now we can only speculate where this water is coming from – from vapors in the Martian atmosphere, attracted by the salts, or maybe from an underground source. Further studies need to be undertaken. But this discovery is big because in the near future we can answer the biggest Mars mystery – is there any life on the Red Planet?

This finding now published in the journal Nature Geosciences is important because it is known that here, on Earth liquid water is linked to the existence of life. In the Atacama Desert, salty water deposits are a refuge for active microbial communities, so the discovery widens the perspective of finding microbial life on the Red Planet.