Windows 10 Gets A Major Update For November 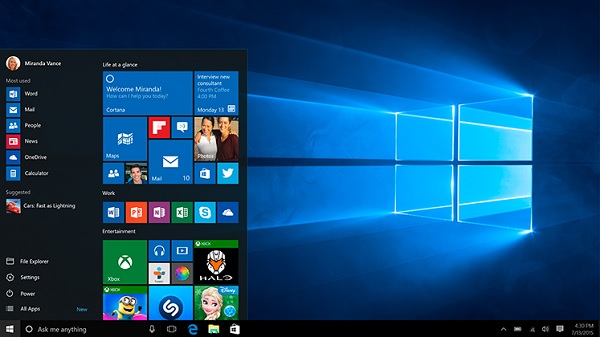 Windows 10 Gets A Major Update For November

Microsoft released its first major update for Windows 10 a couple of days ago. It’s sort of like Windows 10’s first service pack. Among the features include better performance, improvements to messaging, easier device activation, and additions to Cortana. Windows 10 users should receive the update automatically through Windows Update, and Windows 7 or 8 users will now be able to upgrade to Windows 10 with this new update already installed.

The update comes with a huge list of new features, but we’ll just focus on the major changes here. A more detailed list can be found in an update from Terry Myerson, Microsoft’s executive vice president of Windows, on the company’s blog.

The biggest, and arguably most important change, is performance. Myerson says Windows 10 devices can now perform tasks 30% faster than they would if they were using Windows 7 on the same device. That’s nothing to sneeze at.

Cortana now has a pen input feature. That means if your device has any kind of pen input, you can scribble down notes and Cortana will work out what you’ve written down. It will save any phone numbers or email addresses and set up reminders for you. It will also keep track of many of your other appointments, such as movie times, and can now be used to book Uber trips. Of course, if you’re like me, you disabled Cortana when you first installed Windows 10 because you didn’t want to send all the details of your personal life to Microsoft. Unfortunately, that issue isn’t at all addressed in this update, so security-minded users will likely continue to stay away from Cortana.

The start menu has been made significantly larger. It spreads much wider across the screen. It’s also got a larger app limit. Until now, the start menu couldn’t handle more than 512 app tiles on the screen. Now that limit is 2048 tiles. It’s not clear why there needs to be a limit at all.

Microsoft is keen to push Windows 10 as a business platform, and it’s easy to see why. A huge portion of Windows’ user base comes from its business customers. The update adds two new enterprise features for free. The first allows IT departments greater control over which Windows updates they want to install within an organisation. The second update is for the Windows Store for Business, which gives IT departments greater control over the way apps are distributed to devices within an organisation.

Similar to Apple’s ‘Find My iPhone’ feature, this allows users to log-in to their account and see the last known location of their device. It works on all Windows 10 devices, too – not just for mobile devices.

Zach RileyOctober 27, 2022
Read More
Scroll for more
Tap
Top 10 best smartphones to buy
Ducky: an app that helps you see how much you’re destroying the planet