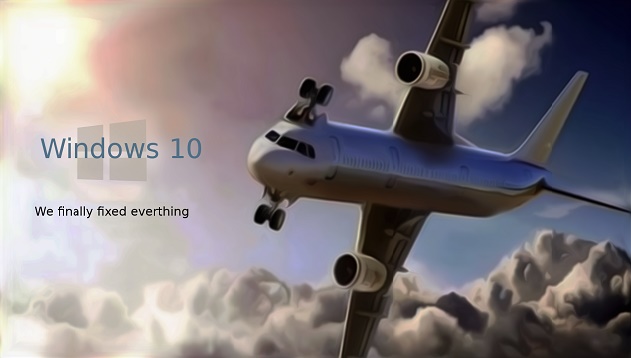 In some ways, Windows 10 is one of the best versions of Microsoft’s operating system to date. On the other hand, though, this is also the buggiest OS I have ever had the misfortune of installing on my machine, especially as of late. There are plenty of problems currently plaguing the software, from Cortana acting like an AI and trying to search for stuff on the web without being told to do so, to Windows 10 causing games to crash or freeze due to poor compatibility. And then there’s the dreaded – and by now – infamous reboot loop while you’re trying to reinstall the operating system or install a certain cumulative update called KB3081424.

I’ll spare you most of the details as you probably already know them by now and try to get closer to the good part – a way of helping you fix the Windows 10 reboot loop. Suffice it to say that my PC fell victim to the loop yesterday while I was reinstalling Windows 10 and yet here I am writing to you from the same PC, so needless to say I was able to find a fix. No, it doesn’t involve trying to edit the registry like most people want to suggest. But to clarify, if you’re trying to update to KB 3081436 or KB3081424 the regedit solution MIGHT fix the reboot loop, but if you’re reinstalling Windows 10 and your PC keeps restarting immediately after you see the Windows logo you can forget about it.

Instead, your goal is to get to the Boot Options menu, look for the Troubleshoot panel and reset your Windows 10 from there. Also, trying to boot in safe mode (which was a feat in and of itself) did nothing to help, as even after I got to the Windows Startup Settings and enabled Safe Mode (F8 or F8+Shift don’t work in Windows 10 apparently) the reboot loop just resumed and Safe Mode was nowhere to be found. Now, if you have Windows 10 on a DVD or USB stick you can  go to BIOS, choose one of those as the primary boot device instead of your hard drive and reinstall that way. Unfortunately, I choose to reinstall Windows 10 from the built-in Recovery feature found under Update & Security and did not have a DVD or USB with me. Reckless, I know.

So, if you’re in the same situation you’ll need the Boot Options menu and that’s generally accessed via Update & Security -> Recovery -> Advanced Startup or by holding SHIFT while restarting your PC in the usual – not by pressing the physical button – way. So in other words, from within Windows 10, which at that time was obviously not an option. As far as I can tell, there is also no combination of keys you can press to force the menu to appear, so you’ll have to do it the old school way – manually restart the PC several times until the thing pops up. However, there’s a catch here as well because you apparently have to restart it a certain number of times. For me, it was 3 times so I suggest starting from there. You’ll know when it works because you’ll get a “Preparing Automatic Repair” message during the Windows 10 loading screen, which usually just sits there planning the next imminent restart if you’re stuck in the loop.

Once you get to the Boot Options menu you’re almost home free, but of course, there’s another problem you’ll have to deal with. Namely, the menu doesn’t seem to like peripherals connected through USB so if you have those – like most people nowadays do – you won’t be able to use them. Your best option now is to look for a PS2 mouse or keyboard as they are traditionally guaranteed to work in situations like these. If you have one of those nearby make sure to plug it in BEFORE starting the whole process. Only my PS2 keyboard seemed to work on said menu, but I did hear reports of people saying that wireless peripherals work as well so you can try your luck with one of those if you don’t have anything with a PS2 connector. Meanwhile, if all you have is USB you could try going to BIOS and looking for the relevant options to enable USB support for mouse or keyboard. Although that didn’t do anything for me, it might work for you and is definitely worth a shot if all else fails.

As for the final step of your journey, things get a lot easier once you’ve accessed the Boot Options menu and have a keyboard or mouse that work there. What you’ll want to do is navigate to Troubleshoot and there you can find the option to Reset your PC. Choosing this will allow you to reinstall Windows 10 from scratch and avoid getting stuck again in the reboot loop. The Boot Options menu also contains options for attempting to repair Windows 10, messing around with Startup Settings or restoring your system to a previous point (if you have one). For me, the Reset PC option seemed the most hassle-free and reasonable one, but you could attempt to go another route if you like. Keep in mind, though, that if something goes wrong and you’re stuck in the reboot loop again, you will have to repeat the process again.

As far as I know this method might not work for everyone, but it’s the only thing that worked for me which is why I wanted to share it with you guys in the interest of helping fellow Windows 10 users in need. With that being said, Windows 10 continues to be highly unstable even after a clean install and with everything up to date.

In fact, the operating system seems to be getting worse because of the latest updates. I’m talking blue screens, crashes, freezes, and lately even the display drivers are fed up. People are talking about bad compatibility with AMD cards, but I’m running and Nvidia card and got the message “display driver stopped responding” multiple times over the last few hours. Needless to say, some of the problems are affecting all sorts of devices and Microsoft is excruciatingly slow when it comes to fixing them.

Personally, I love Windows 10 and many of its new features, but I’ll also be the first to say that if you’re still running Windows 7 or 8.1 you should probably stick with it for the time being and wait for some proper patches to start rolling in. We’ll let you know when they do so stay tuned.