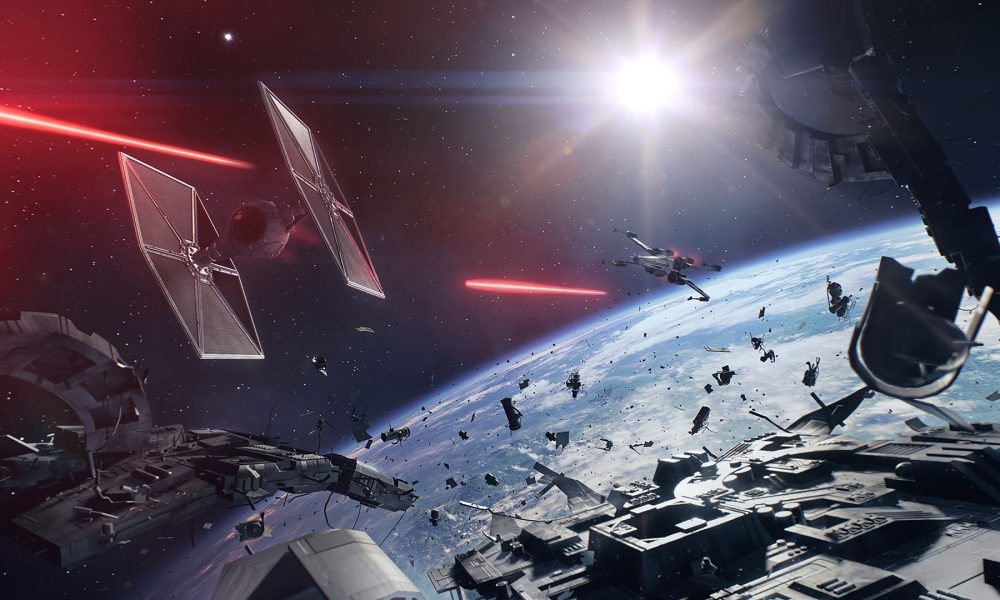 Focused primarily on space battles, the trailer shows off both ships and locations from across the entire saga. Beginning with the classic X-Wings and Y-Wings dog fighting with Tie Fighters, we jump forward (or is that back?) to Darth Maul’s Scimitar and Trade Federation fighters. From the off, it looks and sounds amazing, as hundreds of starfighters wage war around massive capital ships. A few familiar ships also pop-up, including the Millennium Falcon and Slave I.

Even Yoda is getting in pn the action and it seems like he’s had enough, manning a laser cannon that looks bigger than he is.

The ‘Starfighter Assault’ game mode being showcased really looks to be upping the stakes after Star Wars: Battlefront finally got space battles in the Death Star DLC.

With the flying aspect of the game being handled by Criterion Games, these space battles look intense, using camera angles and the sense of speed seen in the recent films. Matt Webster, the general manager of Criterion Games, has confirmed that space battles will be a major part of both the single-player campaign (which follows directly after the Battle of Endor) and multiplayer, giving fans plenty of chance to get to grips with their favorite starfighter.

Webster also confirmed that each ship will handle similarly, with the skills and perks that a player picks up as they play through the multiplayer making the difference rather than using specific vehicle stats. All ships can be flown in first-person and we expect to see several more be shown off in the run up to release.

Star Wars Battlefront 2 will launch on November 17th for PlayStation 4, Windows PC and Xbox One. On top of that, players will be able to get a taste of the action in the open beta running from October 4th to October 9th.

You can watch the full trailer below.