A Review of Samurai Jack Season 5 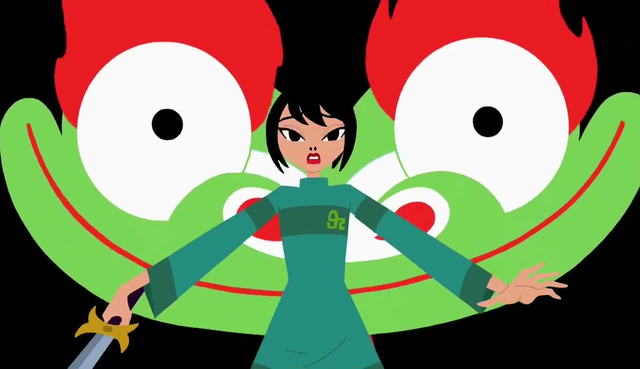 A Review of Samurai Jack Season 5

Samurai Jack was one the greatest cartoons ever created. It had action, comedy, memorable characters, and, most importantly, a pro-active villain who was funny and terrifying, sometimes at the same time. Fans were devastated when the show was cancelled in 2004, especially since it ended without so much as a cliffhanger. However, when the show was brought back in 2017, audiences were excited to see Jack in action again, but they were also anxious due to the underwhelming reboots of other classic cartoons, such as Powerpuff Girls and Teen Titans. So, how do I think Samurai Jack’s final season fared? Now that it’s over, I can finally voice my opinion.

In Seasons One through Four, Samurai Jack was an episodic show. In one episode Jack could be running from alien hunters; in another episode he would team up with Spartan warriors to defeat robo-minotaurs. Then, another episode would follow Aku as he told stories to children. This episodic nature let audiences watch the show out of order and still know everything they need to know about the plot and the characters. Season Five actually introduced a narrative arc to Samurai Jack. This season takes place fifty years after Season Four, after Jack has lost his sword, his patience, and any means of traveling to the past. Audiences now need to watch episodes in order, but that’s because Jack is on a quest to reclaim his sword, and each episode builds on the previous one. However, this story has one or two plot holes, namely that Aku doesn’t realize Jack lost his sword. This plot thread flies in the face of previous seasons that established Aku’s ability to magically spy on Jack. Granted, during the fifty year gap, Aku realized the best way to kill Jack was to let old age do him in, but during that time Aku would still have to spy on Jack from time to time to know if he was dead. In doing so, Aku would then realize the sword was gone and Jack was essentially powerless. This plot hole doesn’t ruin the entirety of Season Five, but it makes me question Aku’s analytical skills.

They might be a little more difficult to judge since, unlike previous seasons where Jack and Aku were the main characters, Season Five introduces two new characters, specifically the musical robot assassin Scaramouche and Ashi the actual daughter of Aku. Here are my thoughts on all four of them:

Samurai Jack
Jack barely resembles his old self in Season Five. The once stoic and collected samurai is now constantly tortured by hallucinations of his inner demons. In the past, Jack could keep them under control, but since he’s been trapped in the future for fifty years with no way to defeat Aku or travel to the past, it makes perfect sense his demons would be stronger than ever, taunting him with the sweet release of death through seppuku. This hopeless state makes Jack someone the audience wants to root for even more — not just to defeat Aku but also to overcome his psychological problems.

Aku
Aku retains his ability to be both comedic and menacing within the span of one sentence, but in this season he also serves as a narrative parallel to Jack. After Aku destroyed the final time portal, he hoped to just wait out Jack’s life and let him die of old age, but when that doesn’t happen, Aku fears he will never be rid of Jack; this fear affects Aku, and he retreats from the rest of the world, so he won’t be reminded that Jack is still alive. Of course, once he realizes Jack doesn’t  have the magic sword, Aku returns to being the Shogun of Sorrow that longtime fans remember and loved from Seasons One through Four. Furthermore, this little bout of depression gives Aku a small character arc rarely seen in cartoon villains.

Scaramouche
This robot assassin is ding-dong-diddly fantastic, baby! Samurai Jack is known for its huge cast of eccentric and memorable one-off characters, and not only does Scaramouche fit the bill, but he is a returning character, a position only accredited to Jack, Aku, and The Scotsman prior to Season Five.  Also, his tuning fork dagger is downright iconic. The only problem I have with Scaramouche is he dies in an anti-climactic fashion, but it is meant to demonstrate that Aku is his old self again, so I can’t complain too much.

Ashi
Ashi is arguably the worst realized character in the show. Initially, she is a member of the Daughters of Aku, a team of women who were raised to kill Jack. For the first several episodes that’s all she is: a powerful new enemy for Jack to overcome. However, after Jack defeats Ashi, she quickly becomes an ally-turned love interest for Jack, and she is also instrumental in the final fight with Aku. While Ashi’s presence mixes up the narrative by providing Jack a permanent companion, Ashi’s story of redemption and love feels rushed and forced. Maybe their relationship would have been more believable and natural if Jack and Ashi were given more episodes together, but that could just be me.

Aside from Ashi, every character in Samurai Jack is in top form, especially returning characters like The Scotsman and Da Samurai. I might be ragging on a bit about Ashi, but she feels out of place. Even The Scotsman’s mountain of a daughter Flora is a better realized character, but that’s probably because she is the daughter of two established characters while Ashi isn’t. Curse my nostalgia goggles.

Samurai Jack does not disappoint on action, which remains fast, fluid, and flashy. Despite Season Five airing on Adult Swim, the show is, for the most part, no more violent than previous seasons. Sure, plenty of blood is spilled, but the violence accompanying the blood isn’t too different from Seasons One through Four. Even particularly violent battles, such as Jack’s fight with the Daughters of Aku, Ashi’s skirmish with the orc army, and the combat between the wolf and the strange green creatures, would have been mostly unchanged (minus the lack of blood) had they aired on Cartoon Network and been made for younger audiences. The action in Season Five is the kind of action audiences have come to expect from Samurai Jack, just with blood.

Samurai Jack expertly combines comedy and action. Instead of relying on quips, one liners, and jokes, the show prefers the “show, don’t tell” school of comedy. For example, one episode (not a Season Five episode) opened with Aku placing an order for delivery via phone. Merely picturing Aku speaking on a rotary telephone to order an assassin to kill Samurai Jack is funny enough, but his conversation plays out as if he were ordering a pizza, which makes the scene even funnier. This comedy, while not gut-splitting, returns in the fifth season unscathed. Season Five uses this kind of humor to create hilarious scenes, including The Scotsman charging into battle on a wheelchair pushed by Flora and Aku seeing a psychotherapist who is merely himself in a tweed jacket and glasses. In fact, the funniest scene in Season Five is in the final episode, when Aku begins a special announcement by playing the original show’s opening. While Season Five has some funny lines, they accentuate an already funny scene rather than make a scene funny.

Unlike modern reboots, Samurai Jack is a continuation of previous seasons and thus heavily relies on nostalgia; audiences need to remember the original show fondly to get the most out of the fifth season. After all, fifty years have passed in the world of Samurai Jack; most returning characters have grown old and changed, and viewers need to know who they used to be to appreciate these changes. This reliance on nostalgia works for the most part, but it is also a double-edged sword because of the inescapable fact that Aku’s original voice actor, Mako Iwamatsu, died in 2006. His replacement, Greg Baldwin, has a lot of trouble mimicking Mako’s performance, which is a shame since Baldwin was a decent stand-in for Mako when he took over for the role of Iroh in Avatar: The Last Airbender. While Season Five can be appreciated as its own show, it takes on a whole new (and better) meaning when viewers understand the self-references.

Samurai Jack Season Five is exactly what longtime fans want. The comedy and action are up to the standards of the previous seasons; it has a decent story, and the characters are, for the most part, memorable and likable. The biggest problem with the season is that it’s the last one. I would have loved to see a sixth season, even if it only only existed to answer several nagging questions, such as how The Scotsman lost his eye or where Jack trained to use guns. After all, the origins of Aku and Jack’s magic sword weren’t revealed until near the end of Season Three, so this wouldn’t be the first time the show told events out of order. Regardless, Samurai Jack fans can rest easy knowing Jack finally made good on his promise to return to the past and undo the future that was, and now never shall be, Aku.