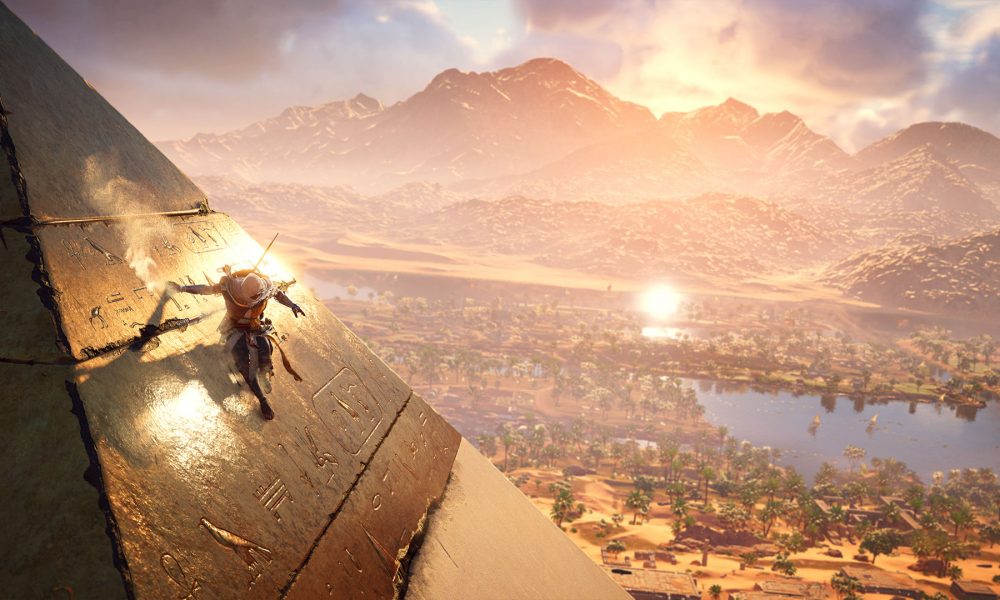 Assassin’s Creed Origins is the breath of fresh air that a stale series needed. Even at first glance, there’s something different about it. An air of change that the IP was crying out for. The year off gave the fan base room to breathe and Assassin’s Creed is all the better for it.

The move to Ancient Egypt has helped. The setting does much more than present breathtaking vistas. It offers a sense of mysticism and wonder that was missing from Victorian London or the French Revolution. I’d go as far as to say it’s the best setting yet, taking the series in a direction that suits the gameplay much better.

A shift in gameplay hasn’t hurt either, taking elements from many different sources including, surprisingly, roleplaying games. This is most apparent in the side quests, which seem to have taken cues from more traditional RPG’s like the Witcher. Interesting and varied mission design makes levelling up (!) a joy. Gone are the auto-fail stealth missions and abundance of ‘tailing’ objectives, replaced with memorable characters and experiences that stick with you.

Side missions now include a variety of activities. Sometimes you might find yourself clearing a bandit camp that has stolen from a local healer, elsewhere you’re fighting in gladiatorial battles, taking part in naval combat or hunting giant crocodiles. There’s a real range of different objectives you undertake, some can be quickly completed, others open up into multiple stages, taking you to many different locations across the dunes.

Ancient Egypt also allows for a much wider narrative scope, as you struggle with the morality of your own personal revenge mission while wading through the mess of Ptolemy, Cleopatra and Caeser vying for control. It’s dark and it’s complicated but it’s vastly better than Desmond’s story. It helps that main character Bayek is one of the best protagonists since Ezio, with actual realistic ambitions and faults.

It all culminates in an exciting journey that is genuinely tense, rewarding and finally free of having to climb six tourist attractions before you can start doing anything.

The biggest addition to Assassin’s Creed Origins is the inclusion of a RPG style levelling system. XP is rewarded for everything, from stealthy killing sprees to discovering unique locations. Each time you ding, you’re rewarded an ability point that can be put into an impressive skill tree. Levelling and upgrading was present in previous games but it was generally much more simple, whereas this skill tree really caters to how you want to play.

An exciting journey that is genuinely tense, rewarding and finally free of having to climb six tourist attractions before you can start doing anything.

There are three main ‘hubs’ of skills, offering abilities that improve your combat prowess, your hunting abilities or the effectiveness of tools such as sleep darts, poison and grenades. While there are some pretty obvious choices to be made at early levels, the higher abilities really reflect how you want to get things done. We’re willing to bet that not many Bayek’s would be too similar once you hit the higher reaches.

Skill variation is also excellent. Some of the combat skills let you improve finishing abilities or provide the opportunity to become a better counter fighter, while the hunter abilities let you control arrows in mid-air, slow down time and the like. It allows you to fine-tune your Bayek, turning him into the perfect instrument for your preferred playstyle.

This focus on flexibility also translates to the missions. Origins has embraced the idea of sandbox, rather than the hint heavy focus of previous titles. As an example, about an hour or so into the game, I accidentally stumbled upon my first main assassination target while exploring a fortified temple.

I already knew of his existence and the game had already warned me that I’d need to level up to effectively kill him but that was it. By time I’d realised where I was and who he was, I was sitting in a bush praying that my gear and abilities were good enough to finish the job.

This idea of organic exploration and a more natural mission structure isn’t necessarily new in gaming but for Assassin’s Creed, it’s a revelation, especially when the older games started proper assassinations with cutscenes and tedious set-up or heavy hints on what you should probably do. Things can (and often do) go wrong, so you’re forced to improvise. 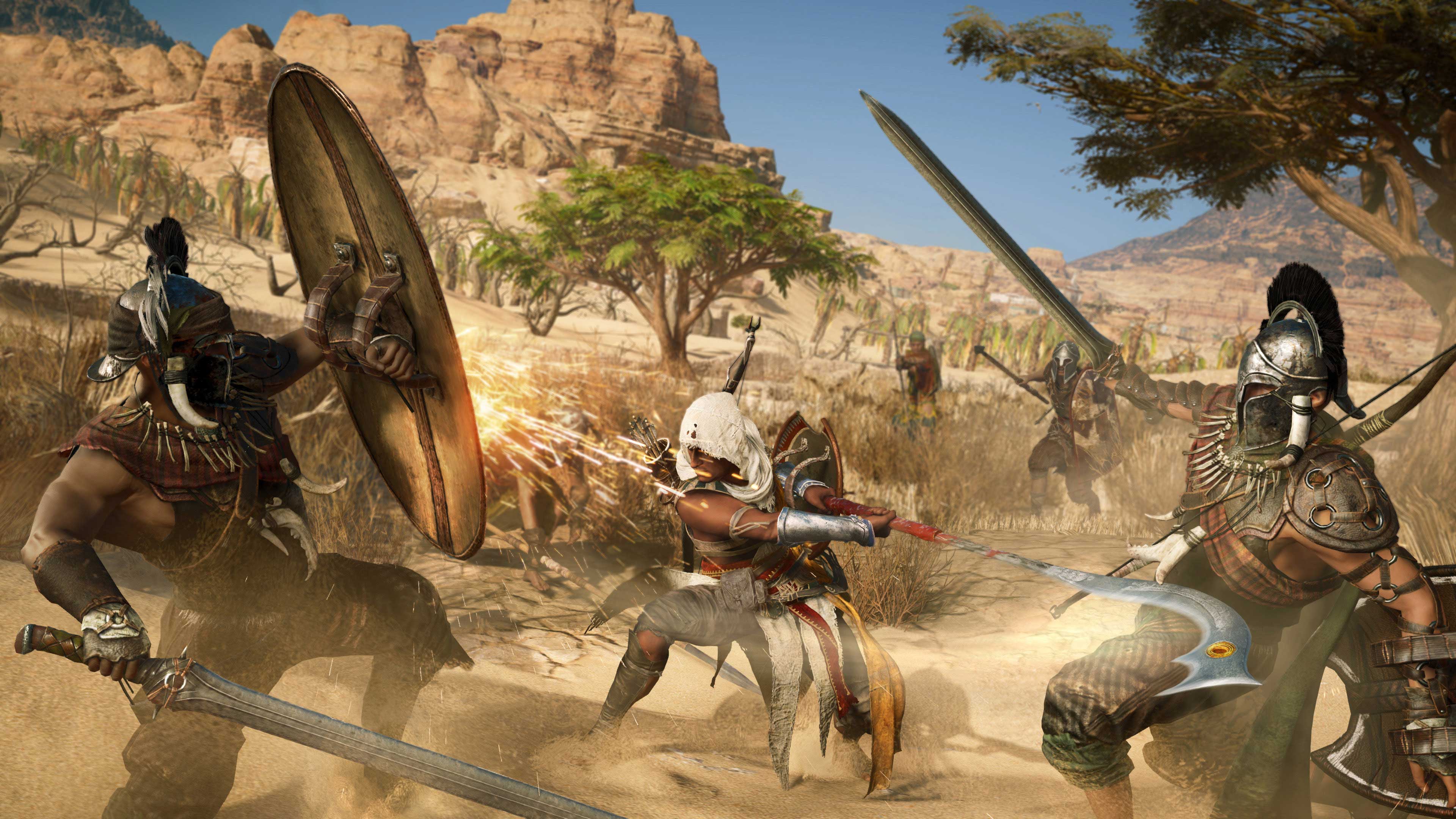 It helps then that when the brown stuff hits the fan, you can rely on the improved combat system to get you out of bother. Gone are the days of waiting for one of thirty enemies to swing so you can perform countless counter-kills.

There’s less of a ‘magnet’ approach and combat is much more free-form. Origins places much more focus on dodging, blocking and parrying, artfully sidestepping becoming a clone of the Arkham games or Shadow of Mordor. It makes everything a bit more difficult but much more rewarding.

Multiple enemies can and will rush you. Damage has been amped up for everyone involved. Weapons even have hitboxes, making the sweeping swing of a spear effective at holding lower level mobs at bay.

You might have noticed that I’ve mentioned gear and different weapons in this review and yep, Assassin’s Creed Origins officially has loot. Older games flirted with the idea, offering several categories of weapons that could be bought from merchants. Origins has taken it one step further with a widely increased arsenal of weapons, each with individual stats and even tier colours.

From famous landmarks to tiny groves, the horizon is always filled with something you want to visit.

Weapons, shields, bows and armor crafting pieces can be found everywhere, from big shiny chests to enemies you’ve just kicked off a roof. The weapons are split into categories, ideal for a range of playstyles. Swords are balanced and afford the opportunity to use a shield whereas maces and axes have wide sweeping hitboxes and increased damage. Some weapons might increase the rate at which you achieve a weapon’s special ability while another might heal you while attacking.

It all just adds to the idea of flexibility, allowing you to tailor your entire Assassin’s Creed Origins experience. The weapon system also means thinking a bit more tactically. Older games could be completed with your bare hands and the hidden blade. That’s still true of Origins but you’ll be hardpressed to get past a Roman shieldwall with just your fists.

The use of heavy weapons to knock down a stubborn defense before switching to a lighter weapon is not just possible but encouraged. You can even switch from a ranged bow attack to melee on the fly, if you’re so inclined. While big fights in enclosed areas can feel a little clustered, the combat system holds up well and is much more entertaining than previous years.

While the weapon system is a welcome addition, the idea of finding a rare weapon is let down by the sheer abundance of them. As you work through the main story, discovering a rare weapon becomes less and less exciting, unlike say finding a Destiny exotic or Borderlands unique. Eventually you’re drowning in a stack of slightly different swords. There are glimpses of some pretty innovative weapon effects (especially cursed weapons) but I feel like there is more room to play with.

It’s a shame as well that so many cosmetic options are hidden behind microtransactions. While you do unlock several outfits throughout playing the game, a lot of the better or cooler looking cosmetics are strictly paid for with Helix Credits. I received 200 upon starting the game properly but aside from that, you’re looking at spending real money. Again, Ubisoft club points can be spent on some legendary weapons so if you still have a big pool of points, Origins can take advantage of them.

In terms of the map, Assassin’s Creed Origins is vast. As you work your way through the region, you’ll come across multiple cities with wildly different architecture and styles. Exploration is a joy with goodies hidden in tombs, lakes and isolated open desert, every crest of a hill revealing something to catch the eye.

It’s this aspect of organic navigation where Origins channels Breath of the Wild. From famous landmarks to tiny groves, the horizon is always filled with something you want to visit.

It looks fantastic as well, running particularly well on the PC (which this review is based on). The entire region can be explored with no loading screens (save fast travel and cutscenes), providing a seamless experience. The draw distance is huge, the frame rate was stable and environment pop-in is minimal. In my playtime I experienced a few bugs with floating bodies but nothing serious enough to hamper progress. All in all, Assassin’s Creed Origins ran very well.

At it’s core, Assassin’s Creed Origins is still an Assassin’s Creed game. You still parkour around a beautiful environment. You can still climb towers and jump into the bales of hay. The difference is, this is Assassin’s Creed after a year off. A year spent training on a mountainside and pulling trucks through snow drifts. It’s bigger, meaner and has a lot more up it’s sleeve. It’s a welcome reunion for a series that still has tons of potential. 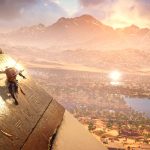