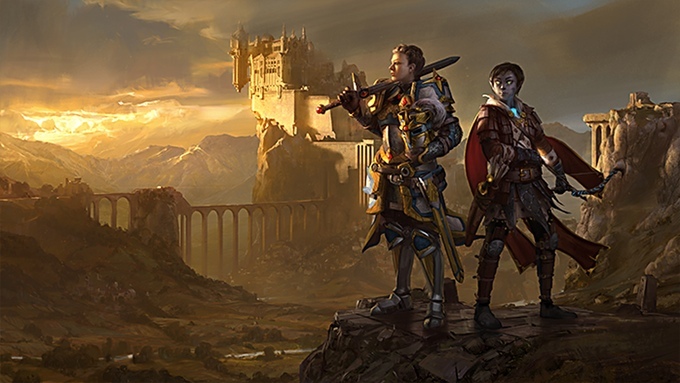 Former BioWare developers have turned to Kickstarter to fund their next project, Mooncrest. It’s set to be a story-driven fantasy RPG that focuses on two female protagonists, and the team developing the game apparently has more than 20 years of combined development experience. Mooncrest has a $400,000 fundraising goal and at the time of writing is sitting at almost $9,000 pledged.

The ad for Mooncrest is a little weird – it doesn’t show any gameplay or give much information about what exactly we’ll see in the game. Instead, the video shows two women go from being on the verge of getting into an argument over a traffic incident to discussing what they’d like to see in a video game. They reminisce about the RPG games of old, talking about Souls combat, challenging puzzles, and strong female protagonists. Meanwhile, a group of KnightMayor developers are listening in from the background.

This isn’t the first we’ve heard of Mooncrest. KnightMayor have been releasing small updates about the game over the past few weeks. KnightMayor, which is made up of former BioWare developers, intends to make the game in the same vein as the classic old BioWare RPGs.

Mooncrest promises a story of “sisterhood,” with both protagonists being female, and “an immersive story of fellowship where the interactions with your wayward companion propel you on an adventure of intrigue.” According to the Kickstarter page, the game will feature real-time combat “where your wits will matter as much as your reflexes” and challenging puzzles that will “reward your cleverness.” Sounds good to me.

“After generations of peace, whispers of an ominous threat are heard on the streets of Mooncrest,” the pitch reads. “Can a mismatched pair of heroines overcome the challenges of their enemies and each other or will all end in ruin?”

There’s no launch date yet for Mooncrest, and its completion time will likely depend on the success of this Kickstarter campaign. There are 29 days left until it finishes, and we can likely expect more information over the next few weeks. It’d be great to see a classic-style RPG with two female heroines.