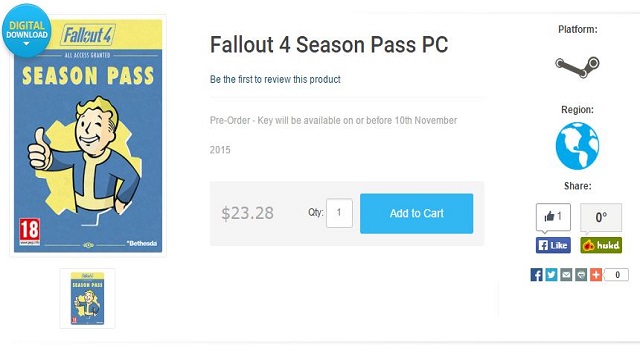 Excited for Fallout 4? Well, join the club because we, too, are just dying to get our hands on Bethesda’s highly anticipated open-world RPG. As it stands, the game is still two months away but there’s already an undeniable amount of hype floating in the air. In order to make sure that everyone is paying attention to the upcoming big release, Bethesda already put out a mobile game called Fallout Shelter and will follow by launching next month a Monopoly game inspired by the popular series. Moreover, the company already announced plans for multiple DLC packs and a Season Pass that can grant you access to all of them for just $30. Having said that, we know of a way by which you can grab said Season Pass a bit cheaper so read on if you wish to learn more.

Our good friends over at CDKeys are offering great deals for pretty much any game (mostly PC, though) and that also includes the Fallout 4 Season Pass for just $23.28. Needless to say, this is a pre-order so expect to receive the key only on or before November 10th when the game launches. Since the Season Pass requires the base game, it would probably be a good idea to grab that first if you haven’t already. Coincidentally, the retailer has a good deal for that as well. Pre-ordering Fallout 4 from CDKeys will only set you back $40, which is about $20 cheaper that what it will end up costing at most stores. No need to worry about any currency converting funny business either. Even if you live in the UK or mainland Europe, 40 bucks is 40 bucks. Not 40 Pounds or 40 Euros, just the equivalent of 40 good ol’ US dollars.

In addition to Fallout 4 and its Season Pass, CDKeys has discounts on a wide variety of other titles that you may want to look into. Just a few of the games currently on offer include Dark Souls 3, XCOM 2, Starcraft 2: Legacy of the Void, Star Wars: Battlefront, Mad Max, Metal Gear Solid V: The Phantom Pain, Just Cause 3, Dishonored 2, and Rainbow Six: Siege. There are also many more where those came from so make sure to check ’em out.