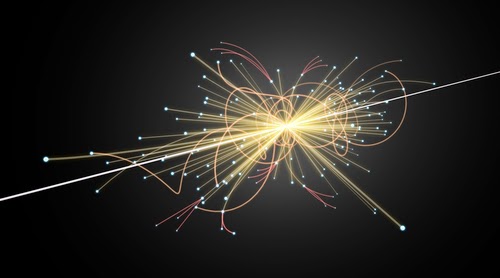 An unexpected discovery was made by scientists from the University of Kansas working with an international team of researchers at the Large Hadron Collider, the quark-gluon plasma. What is this plasma and why it’s so unexpected?

Well, quark-gluon plasma is a state of matter which was hypothesized to exist at extremely high temperatures and densities, milliseconds after the Big Bang, when the Universe was in this quark-gluon plasma state. This period is called the Quark epoch by physicists, a true physical hell.

Generally this type of plasma appears when two lead nuclei collide at high speeds and high densities. Scientists believed that this was the only case in which this plasma is produced. But the experiment at the LHC proved otherwise. This new state of matter was generated by colliding only lead nuclei just with protons inside the supercollider’s Compact Muon Solenoid Detector.

“Indeed, these collisions were being studied as a reference for collisions of two lead nuclei to explore the non-quark-gluon-plasma aspects of the collisions,” said Quan Wang a postdoctoral researcher at Kansas University.”The analysis presented in this paper indicates, contrary to expectations, a quark-gluon plasma can be created in very asymmetric proton on lead collisions,” he added.

The researcher described the new quark-gluon plasma as a very hot (4 trillion degrees Celsius or 7 trillion degrees Fahrenheit), very dense state of matter composed of a mishmash of quarks and gluons. This type of plasma has very strong interactions between quarks and gluons “which distinguishes the quark-gluon plasma from a gaseous state where one expects little interaction among the constituent particles”, said Wang. This is why the researchers think this new quark-gluon fluid-like matter might be very similar to the one at the beginning of the Universe.

The experiment shows this is the first evidence that the smallest droplet of quark-gluon plasma is produced in a proton-lead collision, that’s why the physicists involved in the process dubbed the resulting new state of matter “the littlest liquid”.