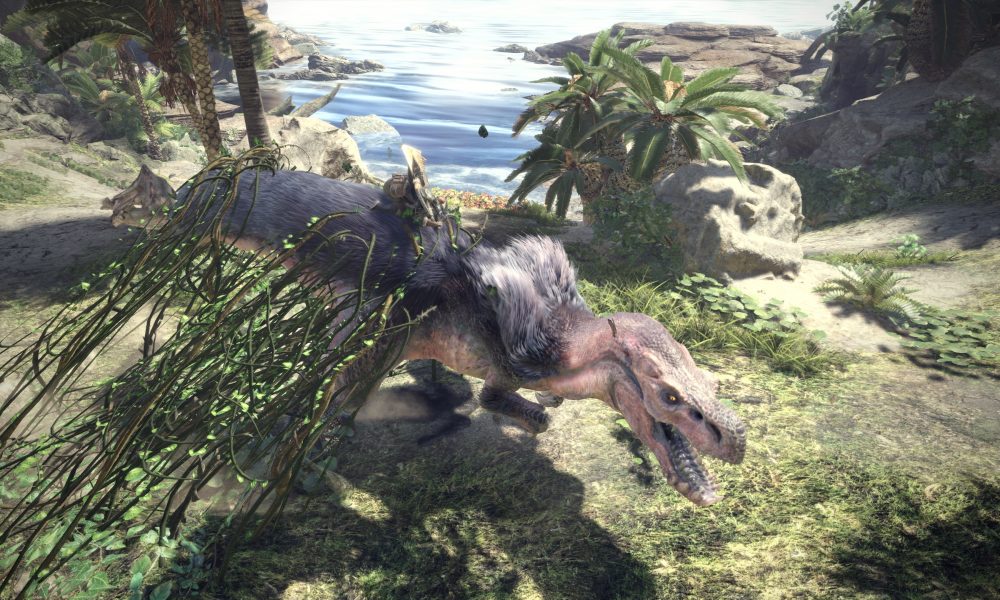 I am a Monster Hunter fan. I live, breathe, and eat Monster Hunter. I have put well over one hundred hours into Monster Hunter Tri alone, so I was beyond excited when Monster Hunter World was announced during E3. My biggest problem with the announcement, however, was that it was scripted and didn’t do a good job of showing how the various mechanics work. Lucky for us, someone leaked a recent gameplay video of the game and MathChief posted it on YouTube. It’s twenty five minutes long, and I highly recommend watching it, but if you don’t have the time, I’ll just summarize how the gameplay video demonstrates the changes. Just keep in mind that the video is all in Japanese, so I might be wrong about a thing or two, and I probably missed some pertinent information.

In every Monster Hunter game to date, the game world has been divided into numerous simple, interconnected zones, separated by loading screens. These zones are small and serve as miniature battle arenas. These areas range from open plains to frozen caves, and each makes for a tense fight against a monster. The upcoming game changes this formula by eliminating loading screens and combining all the areas into one sprawling map. The new, larger map helps keep the action intense, whether the player is chasing after (or far more likely, running away from) a monster.

Since levels are now large, open maps, players actually have to hunt for monsters. Previously, players needed to wander aimlessly to find a monster, but in Monster Hunter World, monsters leave behind tracks and drool that players can follow. Gamers can either track these marks by sight or use the optional Scoutflies. Furthermore, players will find a bevy of monsters, not just the ones they are hunting, so Monster Hunter World introduce various exploration systems, such grappling hooks and stealth mechanics; players can either hide in tall plants Assassin’s Creed style or wear personal duck blinds. These new additions will help sell the concept of “humans using tools and inventive means to fight giant monsters” and help make the game feel like an actual hunt.

Combat is the spice of the hunt

The biggest changes to Monster Hunter’s combat are the addition of contemporary features. The first feature is “drop-in-drop-out multiplayer;” previous Monster Hunter games forced players to create teams before they started a hunt, but Monster Hunter World will let gamers recruit friends to join their hunt on the fly. Additionally, players can now select items via an item wheel instead of scrolling through them one at a time. However, not all changes revolve around the underlying mechanics. For example, the previously mentioned grappling hook is part of an arm-mounted crossbow that can also fire rocks, and the duck blind is one of many cloaks that provide temporary boosts, such as making monsters more likely to attack players who use a certain cloak. However, the biggest change to combat is that players can see how much damage they deal with their attacks, even though monsters still don’t have health bars. As with the Scoutflies, these damage numbers are optional and can be turned off.

The titular monsters have also received various upgrades of their own. Monsters will now react to other monsters and even attack one another. Case in point, in the video, the Great Jagras (the big green iguana-like creature) swallows smaller prey monsters whole; the Anjanath (the Tyrannosaurus-like monster with the inflatable nose) grabs the Great Jagras by its neck and flings it around, and the Rathalos (the most iconic monster in Monster Hunter history) lifts the Anjanath into the air and slams it into the ground. Furthermore, the mounting system returns in Monster Hunter 4 but is much more fleshed out and resembles the full-scale monster climbing system from Dragon’s Dogma (a Capcom game I highly recommend playing). While players can’t climb anywhere on a monster like they can in Dragon’s Dogma, gamers can still hold onto one of several body parts (for dear life) while attacking the monster. Finally, monsters in the trailer seem to move far more organically than in previous games and flow from one attack to the next. This might seem like a natural progression for the game as technology has improved, but longtime Monster Hunter fans will likely relish the challenge of fighting monsters with animations they haven’t memorized.

Various other improvements that add up

The rest of Monster Hunter World’s changes don’t exactly fit in with the previous two categories, but they help change the formula enough to warrant special mention and help make the game more than the sum of its parts, as well as ease new players into the game. For example, healing items won’t slow players down anymore. In every other Monster Hunter game, players couldn’t use a potion while moving, which opened them up to attacks that could potentially take away more health than they regained, but players will now heal on the move. Additionally, players will have access to a home base that lets them swap weapons and armor to suit different situations. Finally, Monster Hunter World will introduce a fast-travel system.

Since the game world of Monster Hunter World is large, players — and by extension, monsters — will be able interact with various parts of the environment to change the tide of battle. For instance, in the trailer, players could bomb a natural rock dam to unleash a torrent of water that sweeps away monsters, and gamers could also trick monsters into toppling a tree that tangles the monster in fallen vines. Finally, according to the trailer, Monster Hunter World will finally feature full voice acting. But, again, this is a feature that can be turned off if players want.

And that’s the long and short of the gameplay preview. Again, I recommend watching the video, as my summation cannot do it justice. I cannot wait to play Monster Hunter World and hope this article helps you get a better idea of how the new game improves the franchise.

P.S. Credit goes to ProJared for creating his own analysis video of the E3 gameplay videos. He took down some notes that I missed, and I couldn’t have written this article without them.