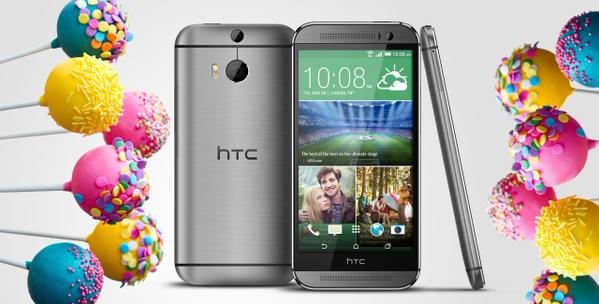 Right now, Android 5.0 Lollipop update is rolling out for HTC One M8 in Europe. The Taiwanese company promised last summer that One M8 will get the taste of Android 5.0 Lollipop in 90 days and it looks like the promise is being kept. The official announcement comes from HTC communications executive Jeff Gordon on Twitter:

HTC One (M8) owners in Europe, have a sweet tooth this morning? Check your software updates!

Also, according to MaximusHD ROM developer LlabTooFeR, the software version is 4.16.401.10 and the update size should be around  780MB. The rollout is going out to carrier versions, but in waves, so it may take a while before the OTA update will hit every HTC One M8 in Europe. Make sure your phone is charged, because if it dies in the middle of the update process, you might risk to brick your phone. Trust me, you don’t want to brick your phone because you forgot to check your battery level. And lastly, do a manual check if you didn’t get an update notification yet. Maybe you’re lucky.

Android 5.0 Lollipop doesn’t seem to bring too many changes, except for the lockscreen notifications, floating notifications and a new notification tray alongside new animations and a few others. Maybe because HTC Sense 6.0 UI is covering up all the beauty, but you can download Google Now Launcher and have a stock Lollipop design which will give you a fresh new look to your phone’s UI + Material Design.

If you already got the update, tell us what you think in a comment below.

Galaxy S5 Android Lollipop update coming to the U.S. as early as next week
iOS 9 already seen running on an iPhone 6