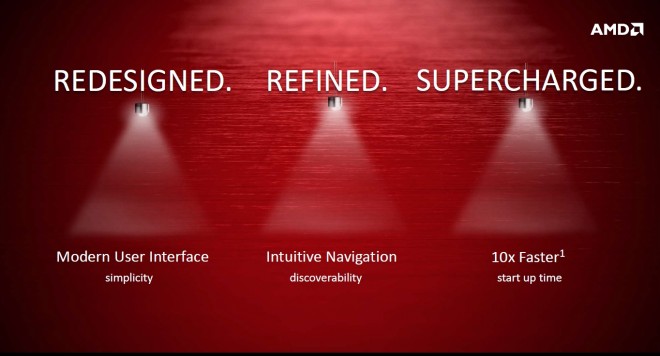 Goodbye Catalyst, you’ve been a good comrade with all the games that I’ve played. As of today AMD has finally launched its new improved graphic software, AMD Radeon Crimson Edition software which has been previously announced this month. In the process of developing a highly performant hardware such as a graphics processor, a similarly performing software is needed.

The AMD Radeon graphics processor team has developed their software to be as improved as possible for a better gaming performance. The Crimson edition is supposed to be a graphics operating system for gamers. The new software is focused on making all games run at optimal settings. The driver package of the Crimson Edition consists of a new user interface, libraries and tools and applications to help you optimize games and apps for your PC’s specifications.

Alongside the new interface AMD Crimson Edition also promises to give your PC a performance boost and as the vice-president and chief architect of Radeon Technology Group, Raja Koduri said “our software deserves to be viewed as a top priority, and going forward that’s exactly what we’re doing, delivering easy-to-use software that is packed with real user benefits, starting with AMD Radeon Crimson Edition software.”

If you go to AMD Radeon’s website you can already use their auto-detect software to check your hardware compatibility with their new graphics processor software or in case it doesn’t work go to the Latest AMD Drivers and Software option and based on your specifications, manually download the new Crimson Edition Software. With AMD Radeon Crimson Edition, your games will load 33% faster and also performance is going to be boosted by 23% per watt.