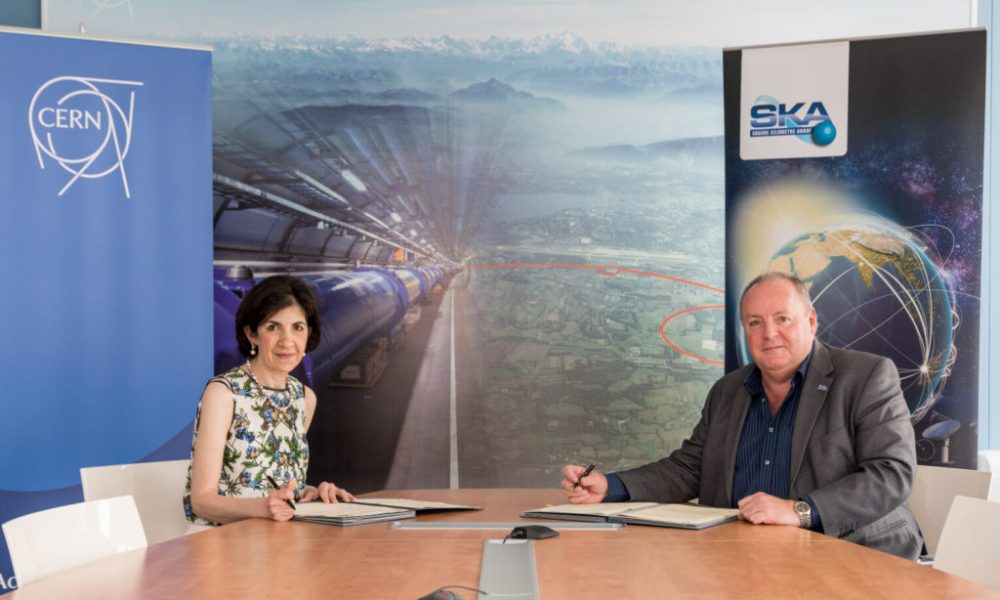 The SKA Organization and CERN signed an agreement formally signaling their continued collaboration in the development of extreme scale (exascale) computing. If you are interested in exascale computing, practical applications for data management, scientific investigation, space exploration, and the origins of the universe, then this news should make your inner geek weep with joy.

The majority of you should have familiarity with CERN. It is the research organization operating the largest particle physics lab in the world. Most of the current experiments involve the Large Hadron collider (LHC) particle accelerator. Experiments using the LHC are responsible for proving the existence of the sub-atomic particle the Higgs boson. As a result of this proof of existence, we have proof for the existence of the Higgs field. Most physicists see this proof as the key for moving beyond the Standard Model of particle physics so that we can understand the universe in a fundamentally different way. Needless to say, CERN’s research produces massive amounts of data. Consequently, the data require enormous computing power to process and a colossal storage capacity.

However, many of you probably are not familiar with the SKA Organization (Square Kilometre Array Organization). It is an international partnership to manage the construction, maintenance, and use of the Square Kilometre Array (SKA). The SKA is still under construction, but when complete it will be the largest and most advanced radio telescope in existence. The telescope is an array composed of thousands of antennae. The deserts of South Africa and Australia are the two locations that will host the equipment. When the SKA is fully operational, it will have a total collection area of over one square kilometre.

The SKA is estimated to have a sensitivity fifty times more than any other radio instrument. The array will have the ability to survey the sky and cosmos ten thousand times faster than existing devices. As a result, the array will produce an  enormous amount of data, estimated at ten times that of today’s global internet traffic. Therefore, the partnership with CERN more than makes sense.

The central research focus is the nature of the universe. The SKA’s design allows it to detect radio signals from billions of light years away. Many of these radio signals represent the birth-sounds of the first galaxies and stars over 13 billion years old.

There is amazing potential for major research breakthroughs into dark matter, dark energy and cosmic magnetism. The project also provides the ability for more robust experimentation to test Einstein’s general theory of relativity. In addition, research will investigate the habitability of planets and include searches for extraterrestrial life.

Is That A Petabyte In Your Pocket, Or Are You Just Happy To Be Doing Scientific Research?

CERN reported that on June 29, the organization surpassed 200 petabytes (PB) of permanently stored data. Current estimates show that SKA will produce in excess of 3,000 PB per year. The first phase of the project alone will produce 300 PB per year.

This means that SKA will produce 160 terabytes of raw data per second. For perspective, this equals the data on 35,000 DVDs per second.

If you’re a bit rusty with your bits and bytes, remember that it goes byte, kilobyte, megabyte, gigabyte, terabyte, petabyte, exabyte. Each successive category is 1000 times the previous category. So, 1000 bytes equal 1 kilobyte, 1000 kilobytes equal 1 megabyte, and so on.

As you can see, the SKA and CERN produce a tremendous amount of data at an astronomically fast rate. Such data production requires advanced computing power. This is the purpose of exascale computing.

Exascale Computing For Your Pleasure 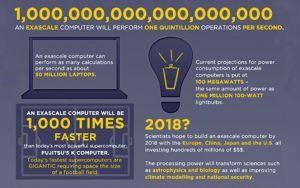 Computing performance is measured in FLOPS, floating point operations per second. An exascale system computes at the level of exaFLOPS. Returning to our earlier comparisons, your Playstation 4 is capable of 1.84 teraFLOPS and the iPhone is at 1.6 gigaFLOPs. If you want to match just one exaFLOPS, you will spend 31,688,765,000 years performing one calculation per second. Yeah, you’ll need a lot of pencils and paper.

The computing power is mind-boggling. Thus, the partnership between CERN and SKA will help continue pushing the development of computers with ridiculously fast calculation power.

SKA and CERN Partnership – A Match Made For The Heavens

Prof. Philip Diamond, the SKA Director-General, said “The signature of this collaboration agreement between two of the largest producers of science data on the planet shows that we are really entering a new era of science worldwide. Both CERN and SKA are and will be pushing the limits of what is possible technologically, and by working together and with industry, we are ensuring that we are ready to make the most of this upcoming data and computing surge.”

Prof. Eckhard Elsen, the CERN Director of Research and Computing, said “The LHC computing demands are tackled by the Worldwide LHC computing grid which employs more than half a million computing cores around the globe interconnected by a powerful network. As our demands increase with the planned intensity upgrade of the LHC we want to expand this concept by using common ideas and infrastructure, into a scientific cloud. SKA will be an ideal partner in this endeavour.”

The two statements best sum-up the collaboration. Therefore, the partnership has amazing potential to expand our knowledge of life, the universe, and, really, everything. Plus, we can hold out hope that further development of exascale computing will trickle down to us consumers and soon enough we’ll have petascale power for our entertainment purposes.

What are your thoughts on the SKA/CERN partnership and the SKA project?