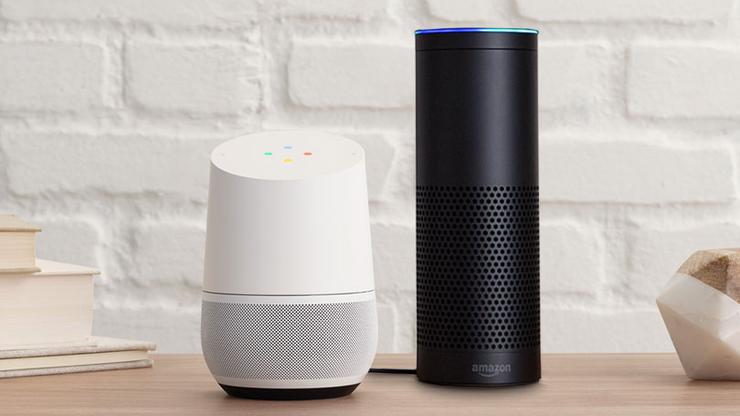 There’s a quiet war raging at the moment. Two giants are sizing each-other up, building up their arsenals, testing each other. This war isn’t about religion or oil or land. No, We’re talking about the war for your living room. Google and Amazon are locked in a close fought struggle for dominance of your home. Their champions prepare to face each other once again. It is the Amazon Echo Vs Google Home.

Despite being accused of looking a little like a black tub of pringles the Amazon Echo hit the ground running. It was the first into the market and it did really well. Equipped with it’s personal voice assistant, Alexa, the Amazon Echo was able to strike first and gain a healthy lead over its rivals.

Google soon shot back with the Google Home. It came armed with the Google assistant and It was a great device but it was always going to be difficult to overcome Amazon’s head start.

Both of these “smart speakers” have been around for a while now and Amazon and Google have become engaged in something of an arms race. Amazon has gone for variety. They have released a number of devices, each designed to fit into a different niche, with more varieties on the horizon. Google, on the other hand, have focused trying to create a single must have product. They have poured their energies into making improvements to the home and their Google Assistant, hoping to make their flagship product more attractive. Google also seem to be looking to third parties to help provide variety.

The scene is set. The champions are ready. The question is, in the battle of the Amazon Echo Vs Google Home, who will win?

The Echo might not be what one could call conventionally beautiful. It somewhat resembles a large matte black (or white) monolith with blue lights dancing on top.  That said, I think that it has a strong sense of style and it draws attention when you walk into the room, which is kind of the point.

The Echo (unless you own an Amazon Tap) needs to be wired into a wall and requires a constant Internet connection in order to utilize it properly, so it needs to be placed next to a power point.

While the Echo only comes in a couple of color there is still a lot of variety. With Three Echo devices to choose from and more on the way you’ll be able to find something that suits your needs. The Google Home comes with a variety of interchangeable bases, to help it find its place in your living room – credit Chrome unboxed

With the Home Google took a different approach from Amazon. Not just because they chose to focus on their flagship but also because of their design. The home is a small curved device, with a customizable base to help it fit in with your decor. It is certainly more subtle than the Echo and comes with a lot more colors to choose from.

Like the Echo, the Home needs Internet and power to function, so it will have to make its home next to a power socket.

When it comes to sound, Amazon’s Echo has an edge on the Google Home. This isn’t to say that the home is bad. It can comfortably fill up a small room but the bass comes on too strongly. The Echo isn’t perfect by any means and is no replacement for a proper speaker setup but in general is a better performer. Both speakers can fill a room up comfortably and unless you turn your music up to full volume the microphones will still be able to hear you.

Neither device can act as a replacement for a proper speaker setup and both will fit quite well into an existing one. That said, if you’re buying the devices in lieu of a complete sound system and it’s between the Amazon Echo or the Google Home, then I’d say go for an Echo, the difference isn’t huge but it is there.

Alexa is Amazon’s take on the personal assistant AI. When it was first revealed Alexa struggled against Google’s assistant when it came to understanding conversation.

Two years on and Alexa has made some real strides. Now it can understand context just as well as Google’s assistant and it is linked in with numerous shopping and streaming applications, allowing you to ask Alexa for nearly anything.

Alexa does support multiple users but you have to ask Alexa to switch accounts directly and it is unable to differentiate between users by voice.

In the past Google’s assistant had the edge here and Google aggressively showcased its almost conversational ability. The Google Assistant was able to draw on the experience of Google Now. The Google Assistant has some nice features, you can search for songs using very vague terms and even ask it to find a song based on the lyrics, if you can’t remember the name.

One of the coolest new features of the Google assistant is it’s ability to recognize multiple users by voice. Once it learns how a user says “Ok Google” it will then recognize their voice from now on.

This state of play will almost certainly change as Google and Amazon keep improving their assistants in order to win the war between the Amazon Echo and the Google Home.

Both The Amazon Echo and the Google Home are being touted as a controller center for your myriad smart devices. In many ways, this is why Google and Amazon are competing so aggressively. If one company can gain clear dominance then they can force smart home device makers to use their services. This goes both ways, if one side can convince more Smart Home manufacturers to produce exclusively for them then their device becomes more attractive.

Amazon’s Alexa relies upon inbuilt “skills”. It has a lot of them, over 10,000 at this point. You can tell Alexa to turn your device on and off but its responses are limited. It will only respond to a single trigger word, or if you group multiple devices to a group word, so it’s a little fiddly and unnatural.

Google Home takes a similar approach and despite Amazon’s head-start is moving quickly. The Google assistant is a lot more flexible and is much better at using “If this then that” customizable commands. Google have also attempted to convince smart device manufactures to include the assistant in their devices by releasing the SDK.

When you’re choosing between the Amazon echo or the Google Home; the Echo still has a real lead on the number of compatible devices that will give it an edge. Although Google is looking to change that.

In comparison Home has a single offering for $129. This is a good bit cheaper than Amazon’s flagship but currently Google is not offering any kind of budget version.

If you’re sizing up the Amazon Echo vs Google home when it comes to price, then Amazon has a lot more choice here and the portable tap is $130, almost the same price as the Google Home. Amazon Echo vs Google Home, who wins this round of the duel?

It’s a really close call. On the one hand the Google Home is better value for money and the Assistant is really impressive. On the other Amazon’s echo is more compatible with other smart devices and you have a lot more choice.

I think a lot will come down to what smart devices you already own and your personal preference but as things stand I think that the Echo has a slight edge for the moment.

That said, the war is just beginning and both Google and Amazon will be looking to lure customers over to their side with new tweaks and features.

Zach RileyMarch 21, 2017
Read More
How to choose the best Amazon echo for you: Amazon Echo vs Echo Dot vs Amazon Tap
The Best Star Wars Games You Can Buy During the May 4th Sale