Motorola finally launched the official Moto X Force, which is the international version of the Verizon-exclusive Motorola Droid Turbo 2. A year after the original Droid Turbo impressed Android fans on a global scale, Motorola surprised the community with another new release bearing a lot of improvements and upgrades. The Droid Turbo was and still is one of the best Android handsets on the market, thanks to its ergonomic design, near stock Android user experience, future-proof specs and excellent camera. The Moto X Force challenges its predecessor on the international market with a much-improved design created for the urban Android user and a lot of improvements and upgrades under the hood that will bring the user experience up a notch.

If you’re in the process of completing your Black Friday shopping list, considering the Moto X Force or last year’s Droid Turbo as your headliner in the smartphone division could be a good idea. The Moto X Force is available for purchase in the UK, but global availability is coming soon. Customers in the US will have to settle for the Verizon-branded Motorola Droid Turbo 2 for now, though. The good news is is that both phones are the same, the only things setting them apart are Verizon logos and Verizon bloat. Unfortunately, the Droid Turbo 2 and Moto X Force will most likely skip Black Friday deals’ season, however their price is pretty decent at about $600 unlocked. Without further ado, let’s see whether one should wait for a wider Moto X Force availability or if last year’s Droid Turbo is a good pick.

The first big difference between the Droid Turbo and Moto X Force is of course design. Although the phones look pretty similar on the outside, the Moto X Force design features a few key elements that are missing from its predecessor and are in fact very rare to find on the consumer market generally speaking. The new handset comes with a shatterproof display that is user-replaceable and has a 4-year warranty against damage. The warranty is only for the screen, however. The handset has a sandwich-type display with two shatterproof panels standing between the impact of a drop and the internal components of the Moto X Force. When Motorola introduced the Droid Turbo 2 and Moto X Force, they emphasized the importance of the handset’s construction more than anything else, focusing on how the device was designed for the urban Android user. 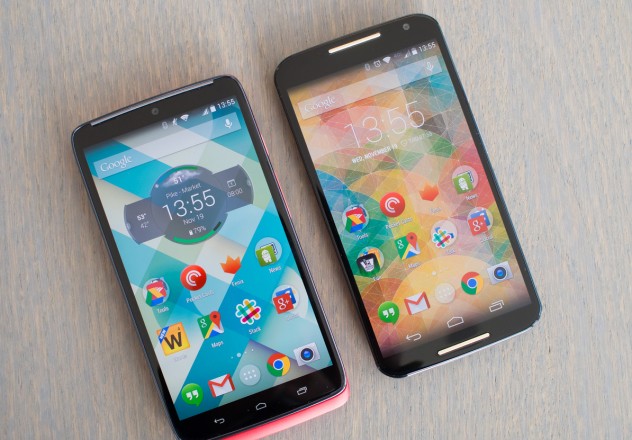 The Droid Turbo, comparatively, fades with its design, but it still features durability improvements that provide a long shelf life for the device nonetheless. The handset has a bit of splash-resistance, which is valid for the Moto X Force as well, but it’s not much. It will prevent it from getting ruined in the rain or from a spilled drink right away, but I wouldn’t put a lot of faith in that nonetheless. The sturdy construction of the handset comes from its metal body and ballistic nylon and kevlar back panels, which you can choose yourself. You can pick them for the Moto X Force, too thanks to its inclusion in the Moto Maker platform. Still, the biggest advantage the Moto X Force has over the Droid Turbo is the shatterproof screen. Although the 2014 model comes with Corning Gorilla Glass 3, rather sturdy protective layer, the shatterproof screen of the successor is made to resist to high drops on concrete, which is great for urban users.

The design of the Moto X Force removes the capacitative buttons from its bezel, replacing them with a clutter-free space. At the same time, the body of the handset ends up being just slightly taller and wider, but it’s also a bit heavier and a bit thicker than its predecessor. On the top and sides, bezels are almost identical. The ergonomic grip of both handsets is representative of Motorola’s design language, so there’s little difference to notice in the long term. Despite the larger display, the Moto X Force manages to keep a very good screen to body ratio that is almost the same as its predecessor’s, which means the handset is still very easily maneuverable.

Speaking of the display, the 2014 Motorola Droid Turbo came around with a 5.2-inch Super AMOLED panel with a QuadHD resolution of 1440*2560 and 565 ppi pixel density. At the time of its launch last year, it was among the highest resolution smartphones with the best ppi on the market, and the Droid Turbo 2 or Moto X Force is right there next to it this year. The successor comes with a larger, 5.4-inch AMOLED display with the same resolution and a slightly lower 540 ppi pixel density. The differences between the SAMOLED and AMOLED displays are hardly noticeable, both handsets having indiscernible pixels, great viewing angles, Moto Display for adaptive brightness and gesture support as well as great outdoor visibility. Although the 5.2-inch display of the Droid  Turbo is ideal, based on quite a few surveys across the globe, the larger Moto X Force display is the winner because it still manages to occupy about the same footprint and offers the same handy, easy-to-use experience. If phablets are not your thing, however, the original model might be closer to home than the Moto X Force.

Moving to the hardware of the devices, the Moto X Force is superior to its predecessor, being one of the most recent flagships of the year. The original came with a Snapdragon 805 CPU, 3 GB RAM and either 32 or 64 GB internal storage, with no expansion opportunities added. The performance of the device is spottless, especially if you get the Moto Maxx, which is the international version of the 2014 Droid Turbo. Otherwise, the Verizon variant has a problem with update rollouts and comes with a few occasional bugs and delays, but nothing too serious. If you’re not a Verizon fan or customer, it’s definitely the better choice to get an unlocked version of either of the phones. Performance is overall exemplary, even with the slightly inferior Qualcomm SoC. Android 5.1 Lollipop should be running on at least a part of the handsets, but the Droid Turbo will be updated to Android 6.0 Marshmallow soon enough. 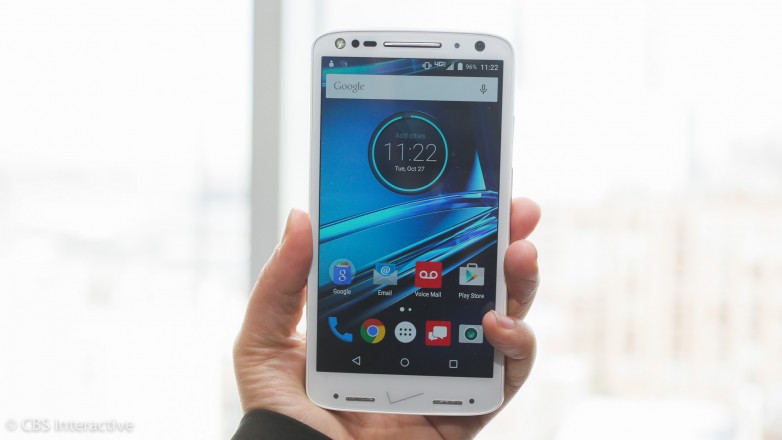 The Droid Turbo 2 has a Verizon logo, the Moto X Force doesn’t

The Moto X Force is a whole other piece of cake, with hardware representative of 2015. It gets a Snapdragon 810 CPU, which doesn’t seem to be having any overheating problems thus far, backed by 3 GB RAM and the same 32 or 64 GB storage options. The huge bonus Moto X Force buyers will appreciate is the microSD card slot, which allow for storage expansion if necessary. The inclusion of a microSD slot in the Moto X Force came as a pretty pleasant surprise to all Motorola fans looking forward to the device. Unfortunately, the battery is not removable for either of these devices. Nonetheless, thanks to Qualcomm, both the Moto X Force and Droid Turbo support fast charging, which aims to combat the need of switching out batteries.

When it comes to connectivity and features, both the Droid Turbo and Moto X Force come with NFC, microUSB 2.0 charging ports, Wi-Fi dual-band, GPS and wireless charging. The Moto X Force adds an infrared port to the list, alongside more supported LTE bands. The Moto X Force comes with stereo speakers, which are a bonus in the face of its predecessor as well. The battery within the successor is slightly smaller, though, measuring 3760 mAh compared to the 3900 mAh cell in the Droid Turbo. Nonetheless, Motorola is convinced both handsets will have good battery autonomy in the long run, although the Moto X Force is expected to have a shorter autonomy in standby. From my personal experience, the battery life on both these devices is exemplary. I managed to get through a day and a half of power user tasks without charging on both, which is rather good in my book. No doubt it could have been better, but it’s acceptable considering the competition. If you’re after long battery life, you’d be better off with a Galaxy Note 4, Elephone P5000, Xperia Z3 Compact or lower-end LG phones which have surprisingly good battery life (3 or 4 days on regular use, wow).

Customization is easier with the Moto X Force

As for the camera, the setup is pretty much the same on both devices. The Motorola Droid Turbo comes with a 21 MP rear camera complete with autofocus and dual-LED flash an d a 1 MP camera on the front. The Moto X Force comes with the same 21 MP sensor on the rear, but adds phase-detection autofocus and an improved dual-tone LED flash. The front camera is a much bigger improvement, with a 5 MP sensor accompanied by its own front-facing flash, making selfies much easier on the Moto X Force. Camera performance is once again exemplary on both phones, although the lack of optical image stabilization does show its caveats in low-light photos or when capturing moving subjects. Nonetheless, compared to other handsets in this department that have similar setups, the Moto X Force camera is slightly superior with  higher color accuracy and saturation and faster autofocus. If you want a good camera, you can choose both the Motorola Droid Turbo and Moto X Force, deciding between them based on other criteria like design, battery and display quality.

The last difference between the two is price, of course. The Droid Turbo price is bound to go down during Black Friday and Cyber Monday, so if you’re looking for a good deal, that’s what you should look for. However, the Moto X Force price is at around $600 unlocked, which is a bit expensive. Nonetheless, the Moto X Force is worth every penny thanks to its shatterproof screen, improved display and performance, slightly better camera setup, stereo speaker, improved design and customizability, infrared port and future-proof features. However, the Droid Turbo still gets the prize for bang for buck, because it offers a user experience that is just as seamless, for less money, as long as you mind the drops. On Amazon, a contract-free Droid Turbo costs $300, half of what the Moto X Force price is. You can also find the Moto Maxx for the same price, which is the international version of the 2014 Motorola Droid Turbo. You tell me: which sounds like the better investment?