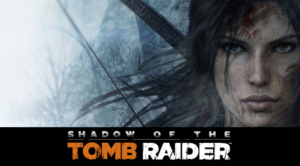 I’ve thoroughly enjoyed the first two games in the revamped and rebooted Tomb Raider series. However, one thing that’s been a little lack lustre is the main narratives that run throughout the games. The first game is an origin story and to be fair, does an alright job of establishing the tone and overall feel of the series. We get to see a young Lara Croft struggle for survival, outnumbered and out matched, on a very inhospitable island. Although many of the characters are cliche, Lara herself, and the struggle she endures, manages to be sufficiently gripping in order to keep the plot plodding along . The second game however, Rise of the Tomb Raider, really struggles to captivate. You can tell that they don’t really know where to go next with Lara. It’s like the characters’ traits were all picked straight out of a hat containing scraps of paper with Hollywood movie tropes written on them. The story is predictable and leaves no room for surprises. When one of the main villains of the game was revealed, I rolled my eyes and laughed at the shear predictability of it. The second that character appeared on screen, I said to myself: “that’s the villain, right there”. The fact that they even tried to make it a twist is almost insulting to the players. Not to mention that it makes Lara herself look like a complete dimwit. Throughout the game I was constantly connecting the dots long before she did, while shouting “Oh come on, it’s so obvious Lara!” at the TV screen.

My first advice for the story of Shadow of the Tomb Raider would be to stop looking at Hollywood movies for inspiration. You’ll only find the same sad tropes there. Instead, they should look at other games for inspiration. Games such as the Uncharted series, which manages to really nail the characters, making them believable and not just cut out copies of every banal character found within an action film. The irony isn’t lost on me that Uncharted draws it’s inspiration from many matinee adventure films, but Naughty Dog still manages to make their stories and characters feel fresh. Another game that could serve as inspiration is Horizon: Zero Dawn. The story didn’t really go where I expected it to and the characters, including Aloy herself, are interesting and complex. Hopefully, Crystal Dynamics will draw from these franchises (and the many other interesting ones out there) and come up with a captivating story this time around.

The inclusion of an over-world map

So far, both games have operated in a semi-open world layout, where you travel throughout various maps (or re-explorable levels if you like) of varying sizes, all connected together in a corridor like fashion. The Tomb Raider series wouldn’t necessarily benefit from going full-on open world. However, the inclusion of a large explorable over-world, filled with secrets, hidden treasure and tombs would really immerse the player within the world. It could be a little similar to the Madagascar section in Uncharted 4 (I know, Uncharted again, but it’s hard not to compare and contrast the two) only much bigger with more to do. The over-world would also serve as a hub where you can gain access to the other levels, only you’d have to find them by exploring the map. This would put an emphasis on the exploration which is, in my opinion, what makes the Tomb Raider games so thrilling. The inclusion of vehicles to traverse and explore the over-world would also be a welcome addition.

Don’t make it an Xbox One (X) timed exclusive

Don’t make it a timed exclusive for any console, in fact. If there is one thing that really annoys me, it’s when big companies splash out so they can get a game on their own console first. When Rise of the Tomb Raider was announced as an Xbox One timed exclusive, I was amongst the many gamers who gritted their teeth in anger. The thing is, I wanted to play Rise of the Tomb Raider. But then, Microsoft decided it wasn’t going to let me play it yet, unless I bought their console right away, of course. I had no intention of doing that. I already had my PS4 and that was enough for me. So, I knew I just had to sit there and wait while Microsoft held the game ransom until they finally got fed up and released it along with all its DLC, at which point I could finally purchase it. Timed exclusives are stupid and pointless. I hope Crystal Dynamics (who are just as responsible in this case) don’t let any company get in the way of supplying the game to whoever damn well wants it!

The Tomb Raider games are definitely a highlight when it comes to fun AAA games. However, if Shadow of the Tomb Raider doesn’t innovate a little, the series will quickly go stale, just like the original series did, back in the day. Hopefully, my suggestions will be helpful, or they will most likely be ignored. Who am I to say how video games should be made, after all? Oh wait, I’m the one who buys them! As are you reader, so what other suggestions would you have for the Tomb Raider series?