Part time writer and full time grumpy old man Alan Moore’s work doesn’t always fair well in adaptation, while Watchmen was certainly good the same can’t be said for most of his other works. The less we talk about the “From Hell” movie the better.

The primary reason I want to see From Hell as a TV show is to wash the bad taste of the film out of my mouth, however the non-selfish reasoning is that From Hell is a doorstop. It goes beyond doorstop; this book is a speed bump. I’m pretty sure if a car hit this at anything above forty miles per hour it would flip the car and kill the driver on impact. In short, the book is not short. 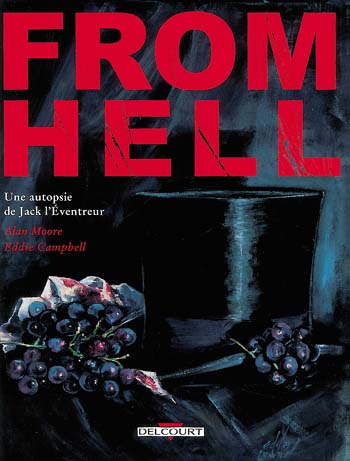 Based around the (discredited) theory proposed in Stephen Knight’s “Jack the Ripper: The Final Solution” that the Jack the Ripper murders were part of a conspiracy to cover up Prince Albert (husband of ruling monarch Queen Victoria’s illegitimate child, Alan Moore’s From Hell follows the story of (a fictionalized version of) Detective Frederick Abberline, a gruff policeman as he tries to discover the truth behind the Whitechapel Murders. It is a long, but very engaging story that a TV show would do far more good to than the movie, which presented Abberline as a young sexy psychic detective, a premise every bit as absurd as it sounds.

Alan Moore was obviously less than pleased with the adaptation of his work (although when is he pleased?) and unfortunately the awful movie seems to be the most popular interpretation of his work. I’d like to think that a TV show (ideally maybe one produced by the BBC) would be able to give it an adaptation it deserves… although Alan Moore would still hate it.