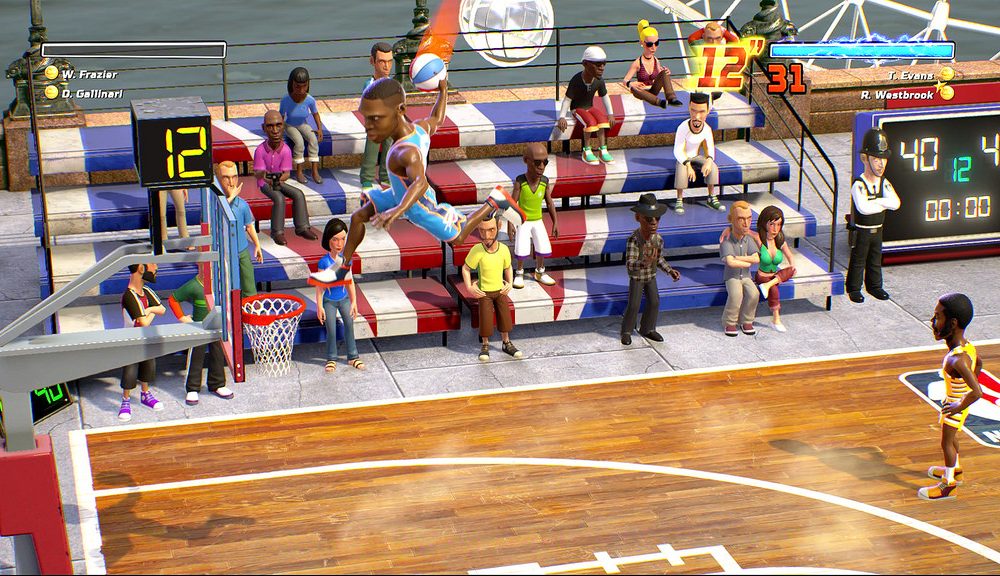 Not too long ago, word spread that arcade basketball was making a comeback in video game form. We received a short trailer announcing this title, NBA Playgrounds, but no information on how it would work. Luckily, Matthew Karch, CEO of Saber Interactive, gave us the lowdown over on the PlayStation Blog.

First and foremost is the shooting. The classic timing of the shot button will make a return. Your shot, layup, or dunk will depend on when you release the shot button. Do so at the peak of your shooting motion and you’ll more than likely drain the bucket. As for defense, things like steals and swats will make an appearance, but so will pushing your opponents. “It’s playground rules after all!”

The most interesting thing being brought to the table by NBA Playgrounds is the Lottery System. By making good plays your team will gain lottery bar momentum. Once it’s filled you get to spin a wheel for a short term, bonus powerup. For example: increased speed, extra jump height, increase shot percentage, and double the amount of points a 3-pointer is worth.

However, the best feature so far is the ability to unlock current or retired players through card packs. Such a simple mechanic brings back memories of childhood. Additionally, players and team will earn XP the more you play them. This will allow you to gain new moves and perks. You can check out the trailer yourself below.

The expected release date is still sometime next month, but I’m just happy the days of NBA Jam and NBA Street are returning. Sometimes a goofy, arcade experience can bring entertainment like no simulation title can. We’ll keep you updated as the May release date becomes clearer.

What are you feelings on NBA Playgrounds? Does it look to recapture the magic of arcade basketball? Are you interested in it? Let us know!

Mike GuarinoApril 30, 2020
Read More
Unlucky Players Rejoice: Loss Streaks in Overwatch Will No Longer Wreck Your Skill Rating
You Will Be Able to Try Out Prey Before You Buy