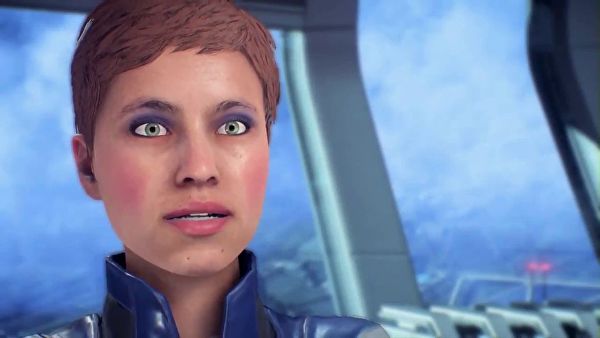 Mass Effect Andromeda has been getting really good reviews with one major exception – the facial animations are absolutely terrible. I’ve been watching my partner play through the game and the animations behind even main characters’ faces makes them look like they’re dead inside – and don’t get me started on the side characters or “filler” npcs. It really seemed like Bioware cut corners when it came to this immersion-breaking issue, and recent reports from company insiders have given some evidence to support that theory. Bioware apparently outsourced facial animations to other EA studios, and the results are not pretty.

The report comes from gaming historian Liam Robertson, who spoke to several Bioware employees anonymously. The company apparently relied heavily on a technology called Cyberscan which maps a person or object with digital scans and builds a 3D model in game. Instead of relying on artists to expertly sculpt the faces of Mass Effect Andromeda, Bioware took the easy way out – and it definitely shows. After the initial scans were taken, Bioware left it in the hands of other EA studios, one of which reportedly being EA Bucharest in Romania.

The fault may not lie with designers, however, as the interviewed sources placed blame heavily on upper management who outsourced the work to cut corners. Even though it’s still an EA studio, work in countries like Romania comes significantly cheaper and must have made things a lot easier on Mass Effect Andromeda’s likely massive budget. According to Bioware the outsourcing wasn’t to cut costs but rather because they didn’t feel the animations needed any more polishing, an opinion that is obviously not held by the gaming community at large.

On the 29th Bioware tweeted an apology to their community and said they were working to correct errors. Only time will tell if this includes the horrible facial animations. Here’s hoping it does.