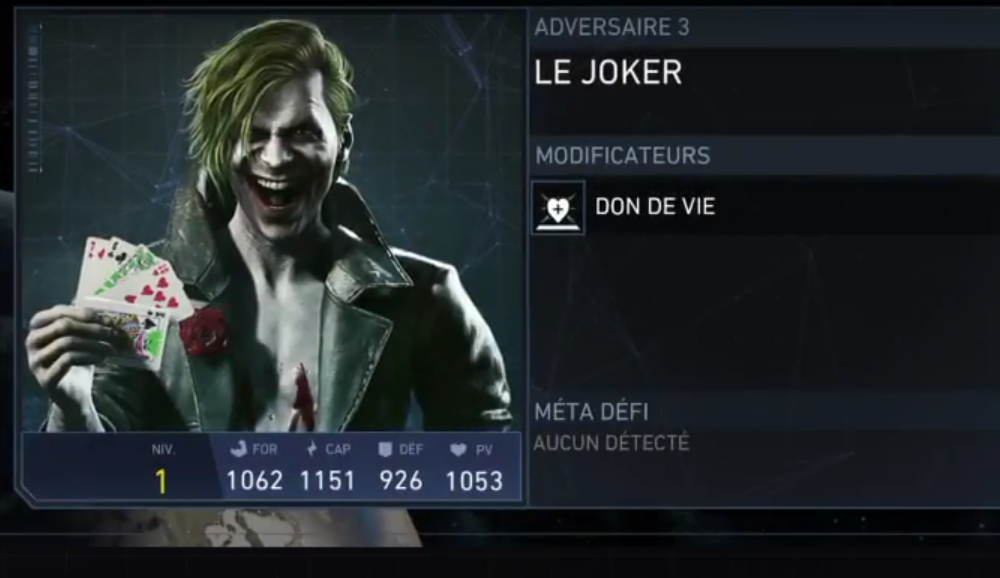 A few months ago a small leak revealed the planned lineup of all characters for NetherRealm’s Injustice 2. So far the scrubbed leaked has hit almost every mark. The remaining tease or info still to be revealed is the Joker. Gamers who played Injustice: Gods Among Us know that the dimension with Superman’s Regime doesn’t have a Joker anymore. Something about Superman brutally killing him after the iconic villain tricked the Man of Steel into killing Louis Lane and Metropolis. The main dimension’s (read: the dimension with our heroes still intact from a canon perspective) Joker made an appearance in the alternate world, but returned to his home as did everyone else. So how exactly the Clown Prince of Crime could make a logical appearance is still up for debate.

However, a screenshot of Joker from Injustice 2 leaked on the internet today. It’s in French, but features the options for the recently expanded modifications and statistics. Also, he utilizes or wields something known as the Gift of Life. As for the appearance of Gotham’s big bad…let’s just say he’s a wholly unique take on the Joker. At least he still has the green hair and bleach white skin. You can check out the full pic below.

It’s anyone’s guess how Joker can once again make an appearance unless the main dimension Joker makes his way to the alternate dimension, which is where Injustice 2 takes place. Regardless of how he does it, we’re sure he’ll cause all sorts of problems for our heroes, the Society, and Braniac alike. He only serves his interests after all which mostly consists of chaos. No word on whether Mark Hamill will reprise his role as the famed supervillain.

Injustice 2 is being developed by NetherRealm Studios and will release for the PlayStation 4 and Xbox One on May 16th. The sequel is highly anticipated and in much demand as it’s been periodically sold out over on Amazon. Are you excited for the possible return of Joker? Do you think he’ll bring his classic nonsense to the fighter? Let us know in the comments below and don’t be afraid to tell us how awesome Batman is.

UPDATE: Another leaked picture (still in French) shows off the Joker in mid-gameplay. Let’s just say he’s a little more “active.” You can view that screenshot down below. 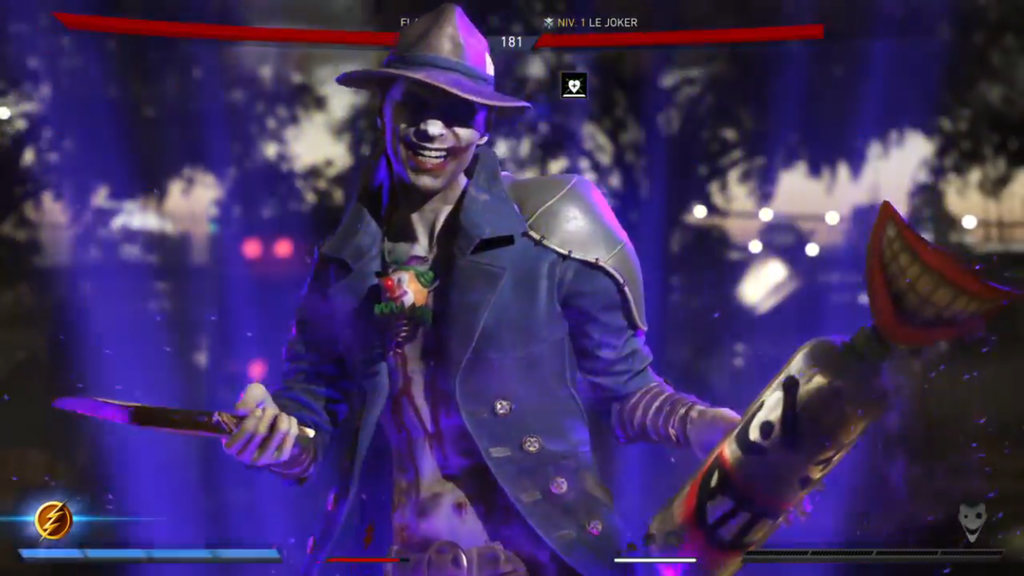 Matt DavisJune 17, 2020
Read More
Call of Duty WWII Officially Revealed; The Full Wrap-Up of All Details
Resident Evil 7 Dev Team Apologizes for Delay on the Not A Hero DLC