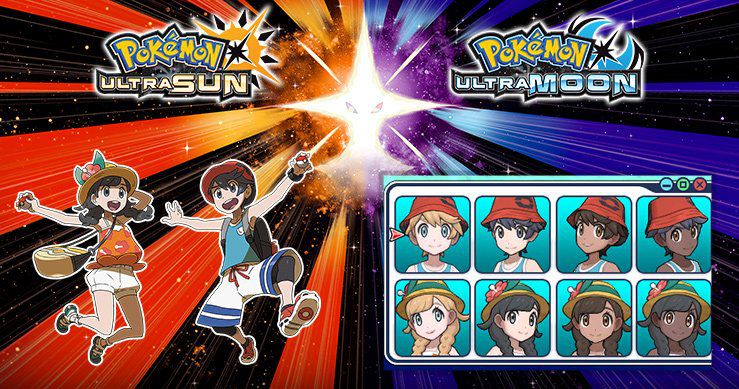 Pokémon Ultra Sun and Ultra Moon were revealed to be in development over two months ago, but we haven’t learned much about them since then. We got a few scattered details here and there, such as Lycanroc’s new form. Now, we have a new trailer with a bunch of new details to go over.

For starters, as the featured image above suggests, we have new trainers to play around with. They each have new designs that are very appropriate for the Hawaii-inspired Alola Region along with further character customization.

As Pokémon sequels and updates tend to do, there is a huge amount of returning Pokémon and characters from the previous games in this generation, Sun and Moon. However, Ultra Sun and Ultra Moon look to be giving certain Pokémon and characters from previous the games that didn’t have much story focus more time in the spotlight here. This is exemplified by various scenes showed off in the trailer and the one narrative element we know so far.

So far, all we know for sure about this story is that it will have a big focus on Necrozma. Originally just the final Ultra Beast to catch and forget about in Sun and Moon, Necrozma is now darkening the skies of Alola and it’s up to the player to find out why.

As for other characters shown off in the trailer, the flying-type Elite Four member looks to have a place in this story, along with Ryuki, one of the many challengers you can fight as champion. Both characters more or less appeared out of nowhere in the original game, with you meeting them both for the first time in the Pokémon League Championships. Ryuki especially is a character many might not have met since he only appears if you go through the Elite Four again and he is randomly selected as your challenger out of a group of 10. Both are featured in this trailer above any other character besides your own implying that they have a much more substantial role this time around.

There are also various other story elements that get a focus in this new trailer, such as story beats about an Alolan Vulpix, a new foresty and Japan-inspired area, more to do on Exeggutor Island, etc. Pokémon Ultra Sun and Ultra Moon release for the Nintendo 3DS on November 17th, 2017. More details are promised to be revealed by Nintendo between now and then.