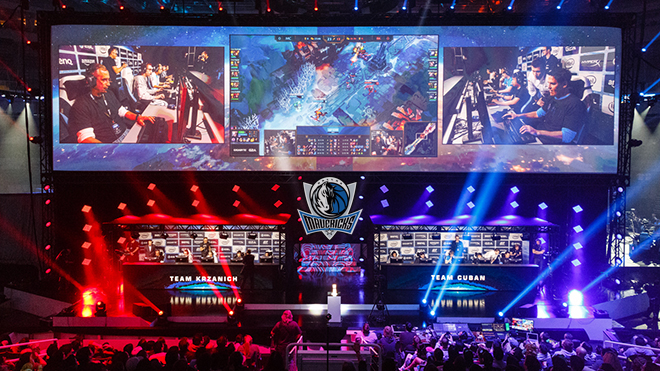 Sports collide with eSports: Mark Cuban, the guy behind Shark Tank and Dallas Mavericks is considering to purchase an eSports team. Even more he was spotted at this year’s Intel Extreme Masters(IEM) San Jose playing League of Legends alongside Snoopeh one of the game’s best player.

Mark Cuban is a high profile business man involved in sports and entertainment and even the author of an eBook called “How to win at the Sport of Business”. He is the actual co-owner of 2929 Entertainment, the chairman of AXS TV and owner of Landmark Theaters.

Besides his involvement in the entertainment business one of his greatest achievements is the ownership of one of the best NBA’s team, Dallas Mavericks who won the NBA title in 2011. Someone as involved as Mark Cuban in sports is actually a supporter of eSports despite other personalities like Colin Cowherd who actually considers eSports gamers nerds.

In an interview at IEM San Jose, Mark Cuban who was most definitely excited to be there, showed his fascination of video games and gaming and acknowledged that to be an eSports player requires: “dexterity, you’ve got to be quick; This is a real sport”. It appears that the general public starts to be more aware of the eSports industry and are finally realizing its true potential and it’s safe to say that eSports is a mainstream thing now.

Also Mark Cuban revealed his intention of acquiring an eSports team but he didn’t reveal anything about which team he is thinking to buy or maybe he is going to start his own team called “Mavericks” who knows, I would most definitely love to see that become a reality(MFFL). My suggestion to Mark Cuban would be to try out Starcraft 2 if he really is into gaming.