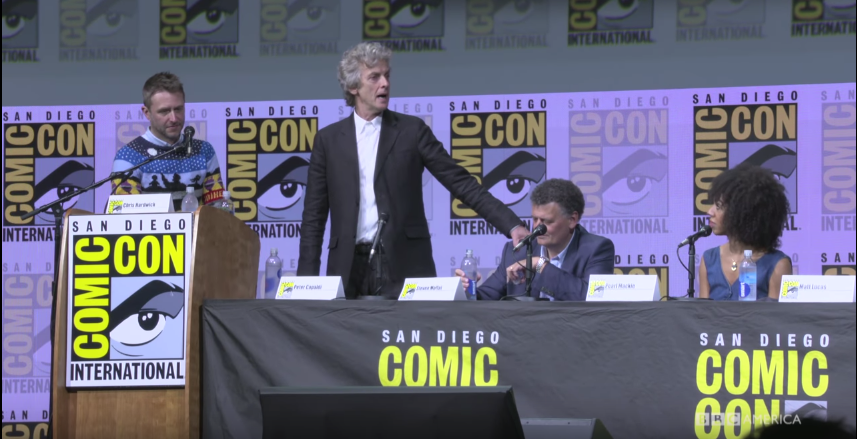 With Peter Capaldi and Steven Moffat stepping down from Doctor Who this Christmas, this Comic Con served as their last as part of the show. Capaldi was treated to a minute-long standing ovation by fans and cast mates, and he followed it with a speech thanking those on the panel.

Motioning to Moffat on his right, he said “this show… Every shot you saw there came through this gentleman’s mind. He’s put together an incredible team; he’s an incredibly gifted artist. The message of kindness comes from his heart, and the creation of a female doctor comes directly from the creation of a female Master.” This was met with applause, as Capaldi referenced Michelle Gomez. Speaking on her, he said the role of the Master was “played so beautifully by Michelle who has delivered a multilayered, hilarious, sinister, and fabulous performance.”

The fans got even louder when Capaldi got to Pearl Mackie, clearly a fan favorite. The new companion followed the Doctor through his last season, and is moving towards her final episode this Christmas as well. “Pearl has been an absolutely magnificent new contribution to the show. She stepped into the juggernaut that we have and brought us a real living character in Bill Potts, who has her feet in the ground and her heart in the stars.”

Capaldi thanked Matt Lucas, who served as a sort of secondary companion as Nardole. “Matt has come along and delivered a fabulous creation, a whole brand new thing… An alien being who is a sidekick who is a little bit scary and a little bit funny and has been a huge contribution to the show, and has come into it with a generosity of spirit and kindness.”

Finally, Capaldi thanked long time Doctor Who writer Mark Gatiss. “Mark is a great friend, a great lover and supporter of Doctor Who… The show hasn’t always enjoyed the success that it enjoys at this moment. He’s written some of the most fabulous episodes, I’m so thrilled that he’s finally been able to appear in the show.” Gatiss has been with the show since its reboot in 2005, and wrote ‘Empress of Mars’ this season. He’ll be playing ‘The Captain’ in this year’s Christmas Special.

Capaldi finished with a laugh, saying “Oh god, I just did a big speech there!”

Capaldi and Moffat also spoke on Jodie Whittaker, who will be taking over as the 13th Doctor. Capaldi spoke to her passion for the role, saying: “I think she’s going to be amazing, she’s so full of excitement and passion. It’s thrilling it’s in the hands of someone who cares for it so deeply.”

Moffat addressed reports of backlash from the shows fans, which he says is nonexistent. “There’s so many press articles about a backlash, there has been no backlash at all,” Moffat said to applause. “The story of the moment is the notion of the conservative Doctor Who fandom has utterly embraced that change.” Moffat referenced an 80% approval rating that he gathered from social media. “There’s so many people wanting to pretend there’s a problem. [The reaction] has been incredibly progressive and enlightened. I wish every single journalist that is writing the alternative would shut the hell up.”

Capaldi and Mackie return one last time for Moffat’s final Who episode on Christmas of this year. Check out highlight’s from the Doctor Who panel here!