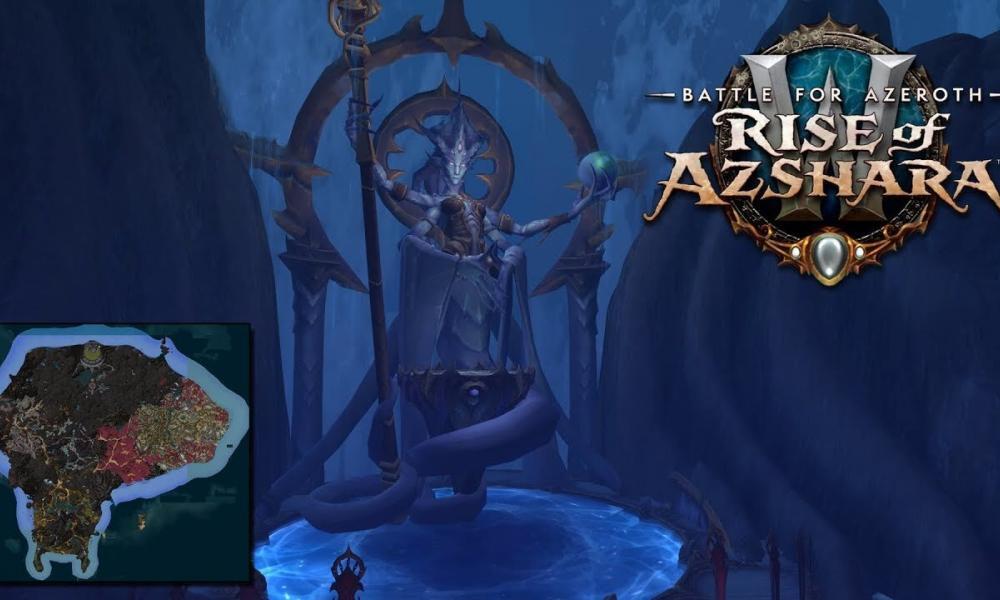 Since the implementation of Patch 8.2 was made in World of Warcraft last June 25, 2019, the long-running MMORPG has been riding a wave of fan hysteria, culminating in the official release of the much-awaited Rise of Azshara. It’s a massive addition to the game—containing two new never-before-seen zones to earn WoW gold, a new raid, a massive dungeon to explore, and many more. Players are now able to fly around the Battle of Azeroth zones, collect exclusive pets to the two new areas, and collect essences. Truly, the time has come for the dawn of a new Azerothian age. The Rise of Azshara update is perceived as a godsend by many players for the failed expansion Battle of Azeroth expansion. We’ll be talking about everything you need to know about this update and more concerning the added features. With this patch already released, it’s only a matter of time before the WoW Classic update will be up next!

What is Rise of Azshara?

The Rise of Azshara update is part of the Battle of Azeroth expansion and is the patch following Tides of Vengeance. The expansion has been problematic for players due to the overarching lore down to the Warfronts and Azerith system. The update promises the address these issues. Some of the major highlights include the Heart of Azeroth Essence system, faction questlines for Taurens and Gnomes, as well as new mounts to collect.

What Are the Two New Zones?

There are two outdoor zones to explore: Nazjatar and Mechagon. Nazjatar is the captal city of the naga that is a large zone where there are a lot of new story quests, allies to meet, and rewards to earn. In Nazjatar, you can have a Bodyguard to accompany you, unlock and participate in Mrrl’s Trading Game to get unique rewards, participate in zone events, and many more. There’s also a new form of Gear exclusive in Nazjaar called the Benthic Gear. The Benthic Gear is similar to that of the Legion’s Relinquished Gear and Mist of Pandaria’s Timeless Gear. All Benthic Gear will have predetermined stats and provides additional bonus effects while on Nazjatar.

The Mechagon, on the other hand, is a level 120 outdoor zone filled with junk-covered hills where you can meet or make all kinds of mechanical-like toys, minions, and equipment via the junkyard tinkering feature. A city that’s inhabited by gnomes and mechas, the Mechagon island zone is an idyllic place for smaller than average World of Warcraft characters. Here, you can try your hand at the new eight-boss dungeon on advanced or Mythic difficulty. You can also collect blueprints in order to make trinkets.

Protection for the Big and Itty Bitty Boys and Girls

Due to the success of Patch 8.1 where the Dwarf and Blood Elf armor was released, Blizzard has decided to add more for different races, this time for Gnomes and Tauren. If you have a character that’s one of these races, now’s the time! To unlock the armor, you’ll have to complete a questline with these following requirements:

Is There Something For My Pets?

Today’s your lucky day because there’s a new Pet Dungeon that’s available! Stratholme is a pet dungeon that is similar to the ones that came before it—namely the Wailing Caverns, Deadmines, and Gnomeregan. You can do the dungeons in either Normal or Challenge mode, which will give out different rewards in turn. For the Challenge version, you’ll be rewarded with the Evil Wizard Hat which summons Minimancer. For the normal version, you’ll be given an Ultimate Battle Training Stone that will unlock a Manapoof Link to Stratholme.

Rise of Azshara will not just be competing with its other MMORPG competitor’s expansions (ex. Shadowbringers expansion for Final Fantasy 14), but with its own as well, that being WoW Classic. Overall, it’s a great redeemer for what’sotherwise known as one of the worst expansions that Blizzard ever released. There is a whole slew of things you can do to farm WoW gold and explore to the point that your head will spin just trying to figure out what to do first.